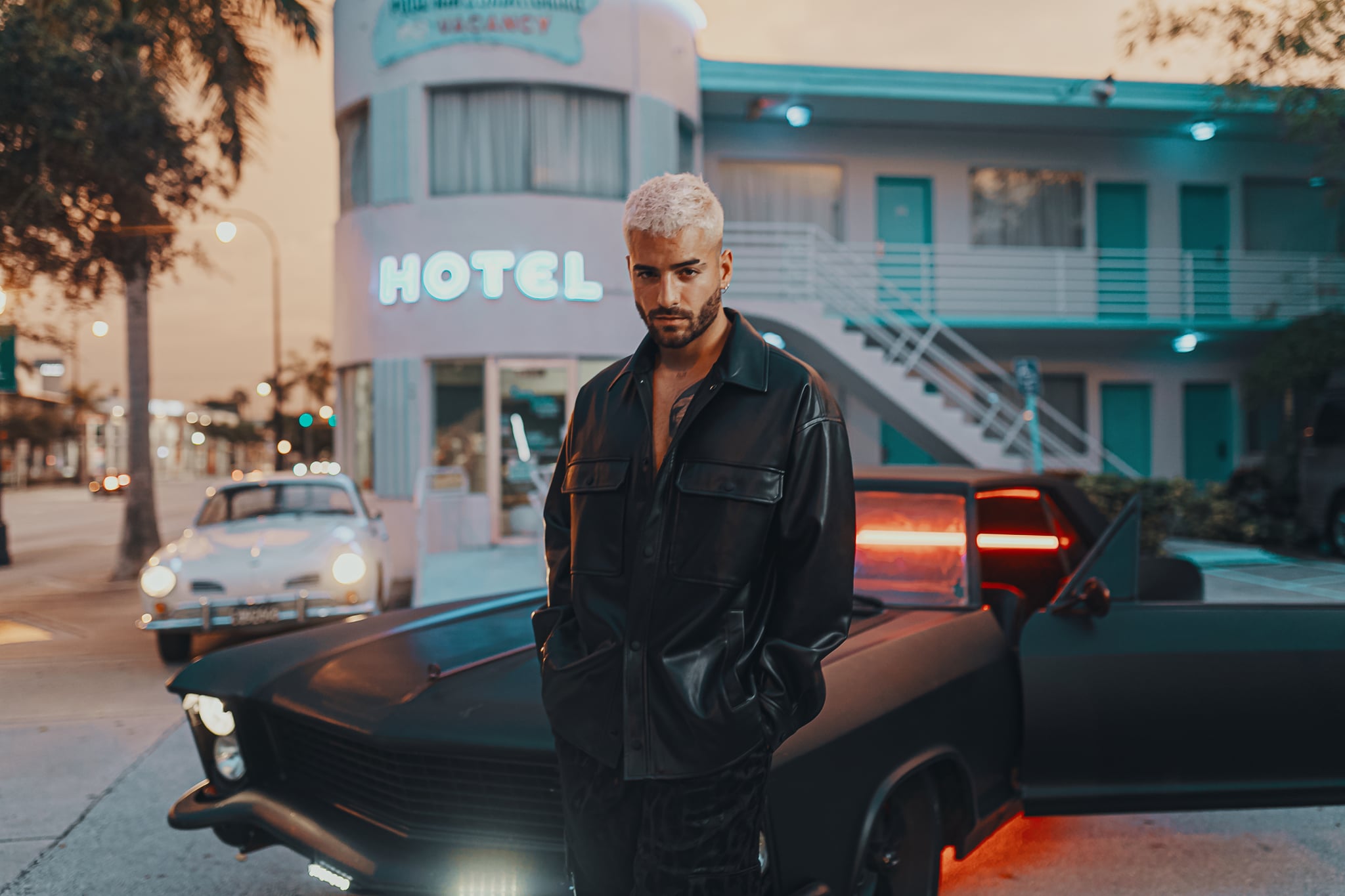 This interview has been edited for length and clarity.

In a move few saw coming, Maluma pulled a page out of Beyoncé's playbook and dropped a surprise album in the wee hours of Friday morning. Titled Papi Juancho, the 22-track project marks the 26-year-old Latin superstar's fifth studio album and brings back the old reggaeton sound that first made me fall in love with him, a departure from the more pop-style music we last heard on 11:11. Produced by The Rude Boyz (who have worked with Maluma since his first album), Papi Juancho is a tribute to his native Colombia and features a handful of collaborations with some of Maluma's idols, including Justin Quiles, Lenny Tavárez, Myke Towers, Yandel, and Zion.

"This album is very special, it represents my essence, what I grew up with, the music I enjoy with my friends and my personal taste in reggaeton music," Maluma said in a statement. "I want to show my culture and I want people to see where I am from, I'm from Medallo City."

The release of Papi Juancho marks a significant milestone in Maluma's career, as it's officially been 10 years since he first began recording music. And with songs like "ADMV" (my personal favorite) and "Hawái," it's also his most grown-up album to date. In fact, even his signature "Maluma, baby!" line has been replaced with "Papi Juancho." Ahead of its release, I got to chat with Maluma about everything from how Papi Juancho came to be and the message he hopes to send fans with this album. Check out our conversation ahead.

Related:
Sorry, but We'll Have to Wait a Little Longer For the Release of J Lo and Maluma's Rom-Com 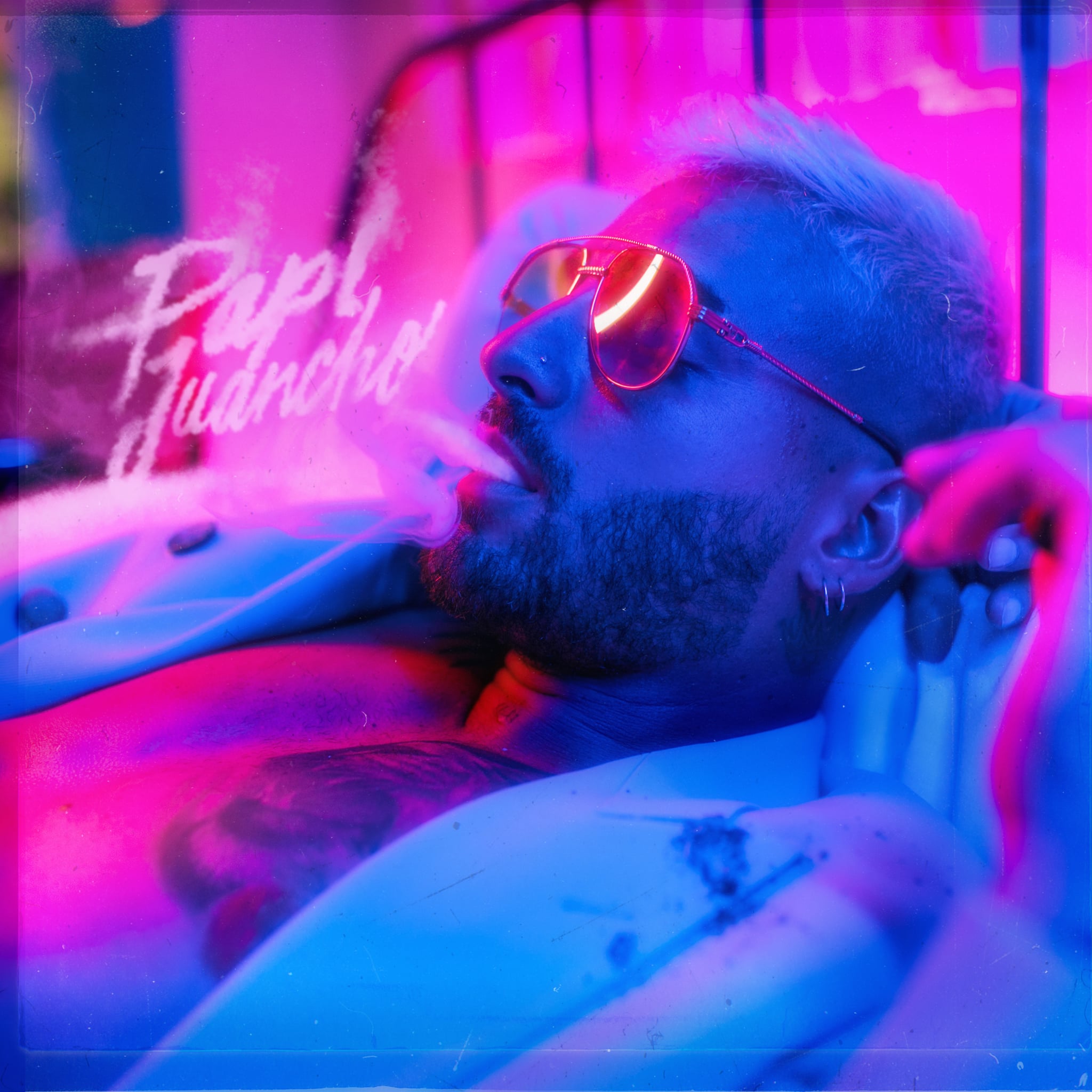 POPSUGAR: Congrats on your new album, Papi Juancho. I'm a huge fan, and I'm so excited we finally have some new music from you.

Maluma: Thank you very much, appreciate it. I'm very excited, we're all very excited about it.

PS: Can you tell me about the meaning behind the album's name? I know Papi Juancho is one of your nicknames and alter egos, but so is Maluma, since your real name is Juan Luis Londoño. What makes Papi Juancho different from Maluma?

M: It's a new vibe that I got when quarantine started. I'm a fan of vintage things, I'm a fan of Miami Vice, and I always wanted to do an album with these colors, these vibes. I would say that all those things last forever — they are timeless.

That's why I always wanted to do this alter ego named Papi Juancho. My family, they all call me Juancho. I'm always saying, "Papi," so one day when I was looking for a caption for the first campaign I did with Calvin Klein, I was like, "Wow, I need a nice caption that can work with these photos." Then I started talking with the team and they were like, "Your name is Juancho and you love saying papi, so why don't you mix both of [those] things?" Everything started with these [Calvin Klein] photos, everybody started talking about Papi Juancho, and that's what started the whole concept of the album. 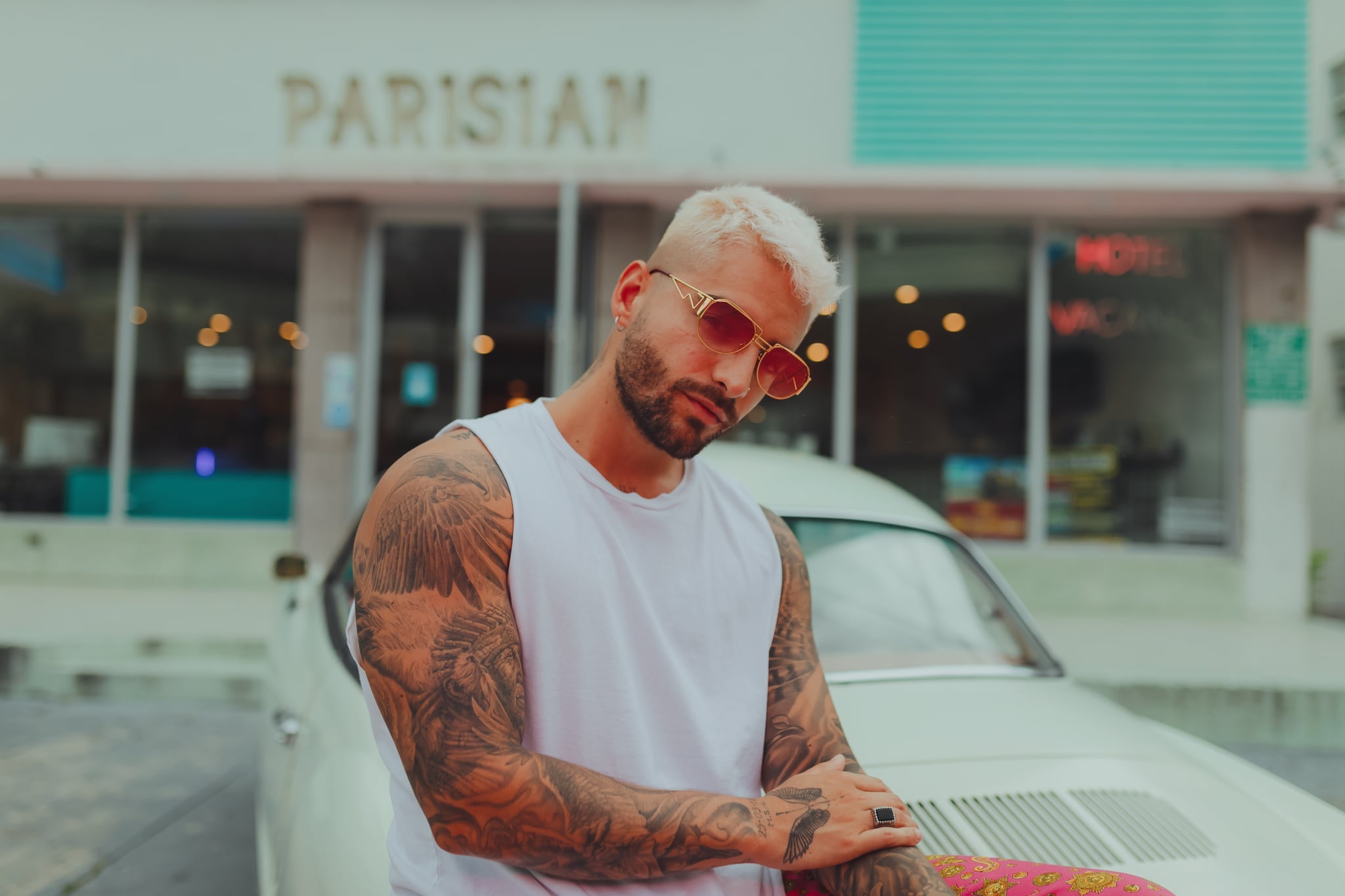 PS: I also feel like we're seeing a more mature side of you on this album, would you agree?

M: Yeah, I would say that this new album is a mix of all the Malumas that I have created over the years — a grown man. I'm not a kid anymore. I'm 26 years old, I'm not 18 anymore. It's already been a decade since I first started. It's mature, but also a very trendy album.

PS: Looking back to when you first got started in music, how would you say you've evolved as an artist?

M: I would say experience. Experience is everything to me. I don't have the same voice I did when I first went into the vocal booth in the studio. Also the way I dress, the way I think, I've been growing. Not only in my career, but also my personal life, and I always try to attach that to my music. When I'm growing in my personal life, I like to make songs that go with my mind and the way I think. 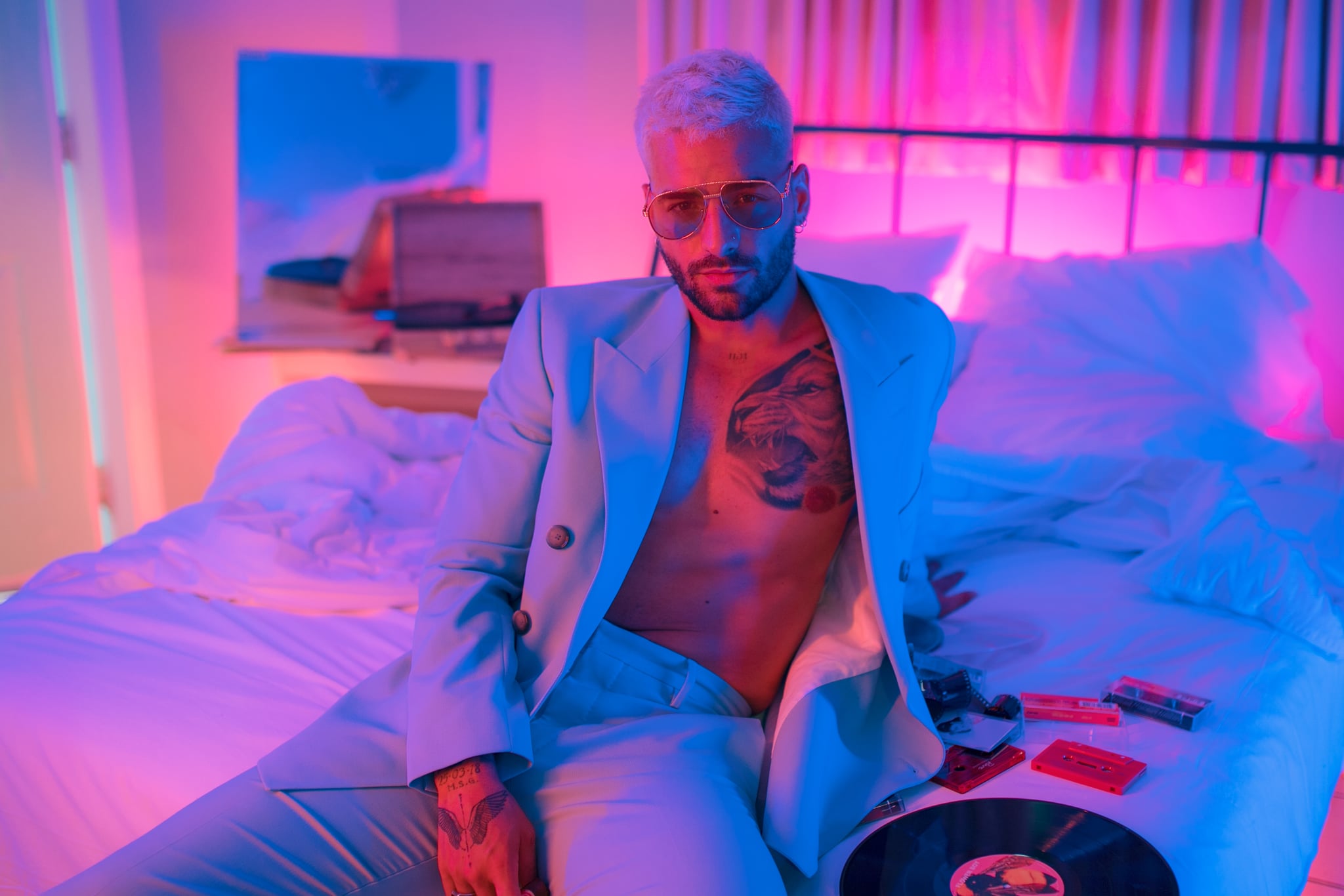 PS: You recently deactivated your Instagram account so you could drop the album as a surprise to fans. Why was it important to you to release it this way?

M: I like surprises and I think this was a nice way to do it. [The fans] think that I'm mad, they think that I don't want to be part of the industry anymore. I've been reading the tweets, and they've been saying so many things. I feel like this is going to be one of the best surprises that we're going to have this year. It's been a tough year, and every time we turn on the TV, they're talking about negative things. This is going to send a lot of positive energy to my fans.

PS: For this album, you focused more on bringing back your reggaeton sound, and less of the pop sound we last heard on your 11:11 album. What inspired you to make that change?

M: When the quarantine started, I was in Europe, I was in Greece. I had to stop the tour, I had to postpone everything, and I flew back to Colombia. I started spending a lot of time in Colombia, which I never do because I'm always working, I'm always flying, I'm always on tour. I felt connected again with this dreamer that had started this crazy dream of becoming a star, becoming an artist. I felt that energy from 10 years ago when I started my career. I was so in love with the roots and all the music that I used to do and all the music that I used to listen to that I decided to make this album more urban, more reggaeton. I tried to bring all the sounds from when I first started my career and do it like 2.0. 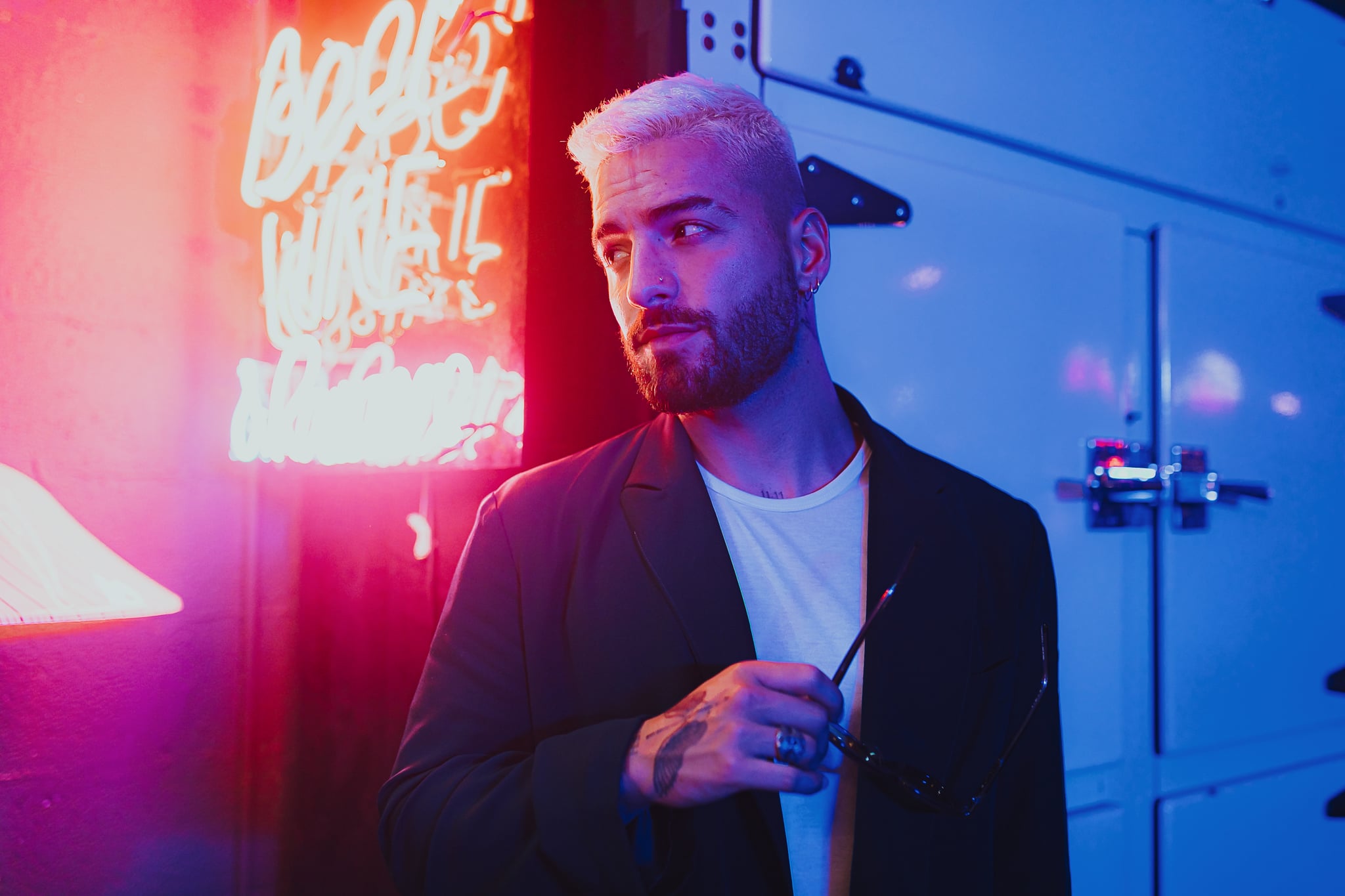 M: That's a tough one. I love the whole album. I don't have a favorite song, I love them all.

PS: What message do you hope to send to your fans with this album?