Aside from the religious influence of the Spaniards, the roots originally tie back to the Aztecas of Mexico. The Aztecas believed that death wasn't the end. As a result of this philosophy, Día de los Muertos naturally progressed into a cultural ritual for the Indigenous people of the region. This was a time when they celebrated their passed loved ones with food and various offerings.

From Oct. 31 to Nov. 1, the Aztecas and pagans, respectively in separate cultures, understood this annual period as a time when the veil between the spirit realm and the living realm is thin. During this time a dimension opens that allows access to spirits.

This ethereal portal is an opportunity to heal through reconnection. It's seen as a momentous homecoming for the spirits of our beloved dead ancestors. Día de los Muertos is celebrated in Mexican households from Nov. 1 to Nov. 2.

Over time, the eventual intertwining of Mexican Indigenous beliefs and folk customs from the Catholic Church that make up the largely mainstream understanding of Día de los Muertos has branched out. Its influence has spread as inspiration for other Latinxs to honor their loved ones through this sacred celebration.

Food plays a tremendous role in Día de los Muertos. Food is symbolic and is considered to be an ofrenda (offering) to the dead. There are food staples you'll find across altars such as corn, tamales, and now the ever-popular sugar skulls. The modern-day concept is to prepare the favorite meals of our dearly departed as a deliciously coercive gesture to guide their spirits back to our homes. The food is what brings us together during this time, which runs parallel as a special ritual and an unconscious act of intergenerational healing.

Native American and Mexican American artist Alicia Becerra deeply incorporates food in her altar work during this time. "We often cook chile verde, but in the last few years I've added sugar cookies in the shapes of traditional elements of a Día de los Muertos altar. One of my favorites is the nicho cookie with an edible image of my ancestors. We pair this with a warm cup of champurrado," Becerra told POPSUGAR Latina.

"My husband and daughters help prepare the altar. . . . We always spend time with my mom sharing memories of the ancestors we add to the altar. My daughters enjoy hearing the stories every year. But since my dad passed away in 2018, they feel more part of the storytelling. They love remembering him." 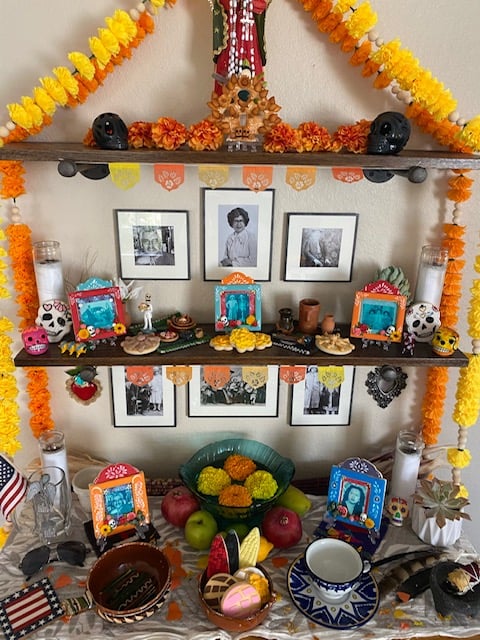 Chicana and self-proclaimed kitchen witch Carla Catalán of Catalán Botánica finds Día de los Muertos to be a personal time of peace and renewal. She fondly recalls visitations to the family burial site at the cemetery with her grandmother to honor the dead in their family. "Celebrating and honoring my ancestors is a ritual for my spirituality and it started when I was 8 years old. At this tender age, my parents divorced and I was sent to live with my grandmother in Mexico," Catalán said. "A few months after I arrived, she prepared a picnic and we walked to the cemetery. There were so many other people there too. I was scared because I had never been in a cemetery in the USA, much less had a picnic at one. She cleaned the family tomb, prayed, and then we ate our picnic. My older cousin explained to me that it was to remember our loved ones that had died and not to be afraid." 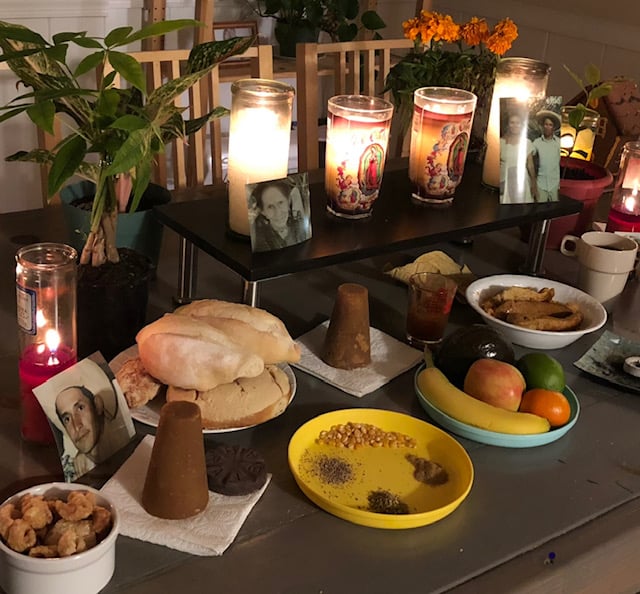 Chilean and Mexican journalist and fellow POPSUGAR Contributor Yvette Montoya told POPSUGAR Latina: "Nov. 2 is a day when I put a full spread for them with drinks, foods, and flowers. But I have an altar that I tend year-round and do pretty much the same thing — but to a smaller degree. It's definitely an important component of my ancestral veneration ritual because it's important to give thanks and to empower the ones who protect us."

When it comes to building her altar, Montoya explained: "I mean how do the living view food? It's sustenance, it's energy, it's culture, it's a symbol of love and devotion. I always put a little something for them on my permanent altar, whether it be a bit of the food I made for myself or if I made something I know one of my deceased relatives liked to eat. So when Día de los Muertos comes around I feel like it's a great reason to go all out. It's fun for me to go to the market and feel out what I'd like to make for them. It gives them energy and lets them know we still think of them." 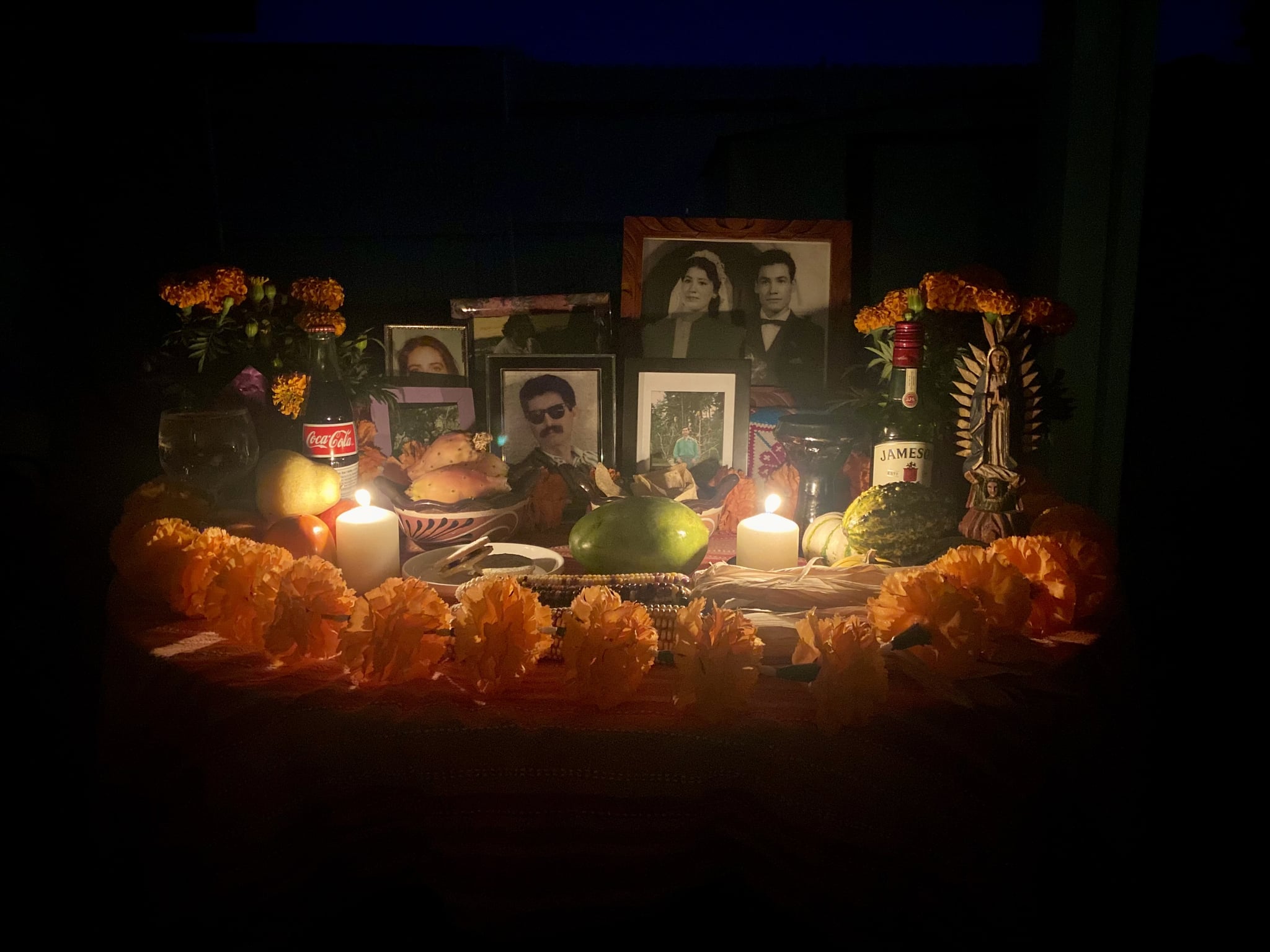 Part of the rich historical connection to food is liquor. Alcoholic drinks make notorious appearances across altars during this time. Tequila specifically is a sacred beverage to us and can be considered a cultural offering. Tequila's connection to the land is an intimate act of honoring the mother archetype known as Pachamama and to the ancestors of generations before us.

Eliana Murillo, a chicana Mexicana who cofounded organic tequila brand Alquimia and founded Latinas Who Brunch, has a long and rich heritage with agave, as her family have been producing tequila for generations.

"[My] great-grandfather Abelino taught us about growing crops organically and all naturally with actual living plants in the altar, including an agave and a tiny cempasúchil plant. We thank our ancestors for teaching us so many beautiful things that allowed us to start our family's small business, Alquimia Tequila," Murillo told us. "We reflect on the different iterations of what we've created and what we've learned along the way, from old bottle and label designs to retired pamphlets and things we have outgrown as a company. That's a bit unique to my family, but it's important to us to honor our collective journey. All the turns we've taken and our past loved ones we've learned from, so we can appreciate how they've shaped us and helped us grow. We pour tequila into our special glasses for them, ones they would have used to sip tequila, and then enjoy it after we pray for them. They would have wanted us to celebrate with them too." 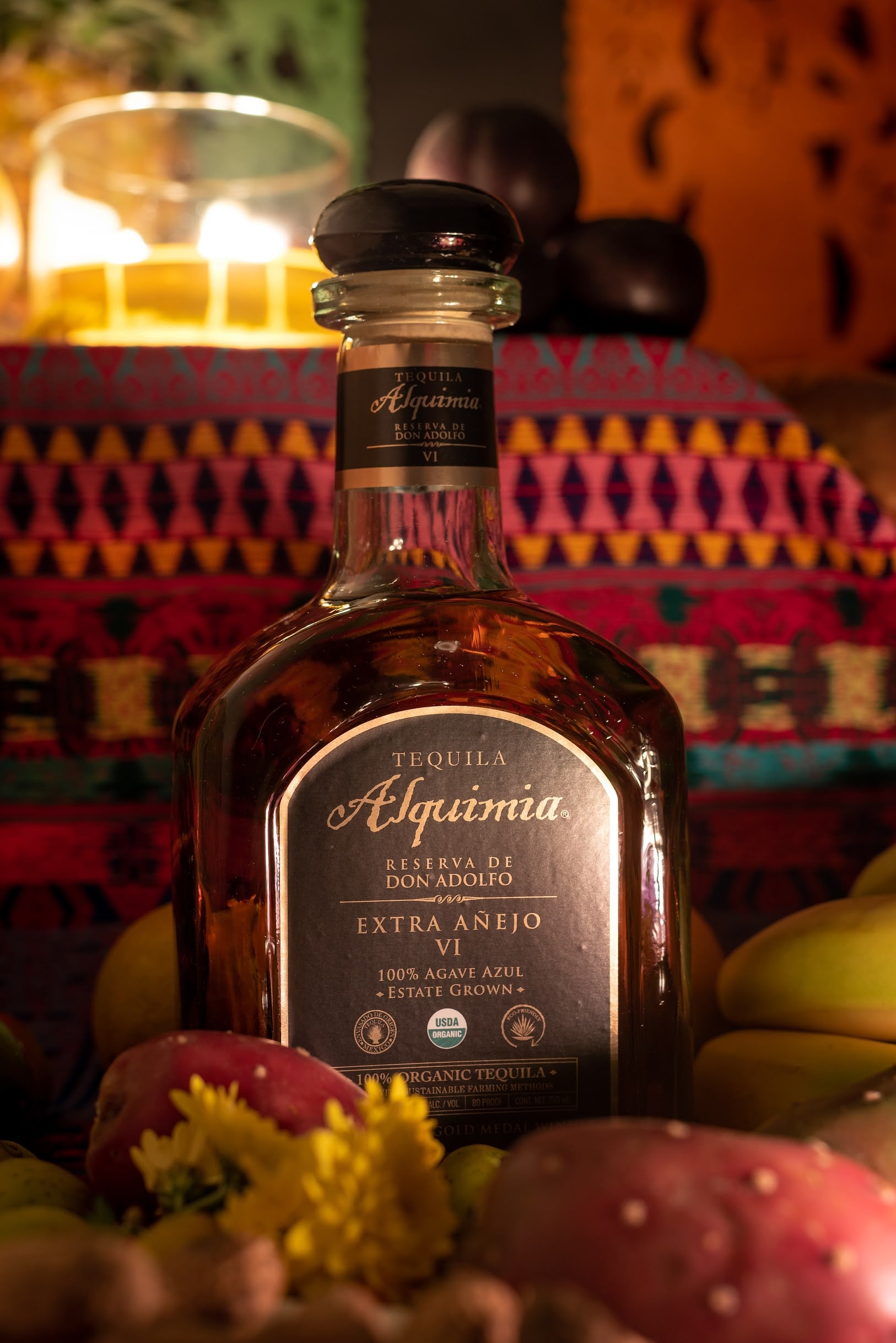 There's no incorrect way to create an altar and honor your loved ones during Día de los Muertos. Just remember the comida! Preparation can range from simple offerings of favorite fruits to a slice of bread and honey to an extravagant meal. No matter the budget or socioeconomic situation, prepare within your means, because anything you give shows your apoyo to your deceased loved ones.

If you want to try a new recipe, Catalán shared the calabaza con piloncillo recipe she prepares annually for her muertos. This could be your new favorite receta! 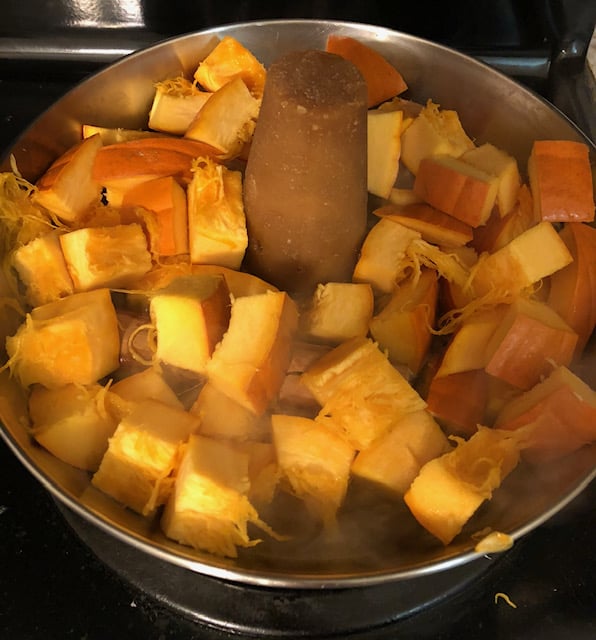 The recipe is very easy and feeds four people.

Ingredients:
- 1 medium pumpkin (look for pie pumpkins)
- 2 sticks cinnamon
- 1 (8-ounce) piloncillo (a raw form of pure cane sugar)
- 1.5 cups water
- sweetened condensed milk or your favorite alternative
- Optional: This is where you can choose spices to correspond with intention or just because it'll be delicious. You can add clove, nutmeg, or allspice.

Instructions:
Wash the pumpkin and carefully use a knife to make little holes around the pumpkin. Choose a pot that is large enough to completely cover the pumpkin. If you don't have a large pot or don't want pumpkin seeds, you can put the pumpkin on a sheet tray and bake on the lowest oven setting for about 30 minutes and it will become soft enough to slice into chunks and scrape the seeds out. Then, place the pumpkin, piloncillo, cinnamon, spices of your choosing, and water in the pot. Use a low heat setting. Allow this to cook until the pumpkin is tender, approximately 2-3 hours. Stir often, add water as needed, and use a spatula to chop the pumpkin into chunks.

To Serve:
Place a few pumpkin pieces in a bowl and drizzle the piloncillo and pumpkin sauce on top. If you wish to embellish, you can add a little sweetened condensed milk or milk of your choice.

May you honor living and dead loved ones year-round.