Larissa Ione's Chained by Night (out Sept. 30) is the second paranormal romance in her Moonbound Clan Vampires series. The story follows a vampire clan leader who agrees to mate with a rival clan leader's beautiful daughter in order to have an ally against the humans. The only issue? He's in love with her identical twin sister. We're sharing two enticing excerpts from the hot new read. Keep in mind: if you wouldn't want your co-workers spying on you reading Fifty Shades of Grey, these excerpts should be considered NSFW. Here's a little more about the book:

New York Times and USA TODAY bestselling author Larissa Ione sets the night on fire with a thrilling new novel of irresistible hungers and immortal enemies in a world as sensual and dark as her Demonica series . . .

Read the two excerpts below, and for more information on the paranormal romance, visit XOXO After Dark. 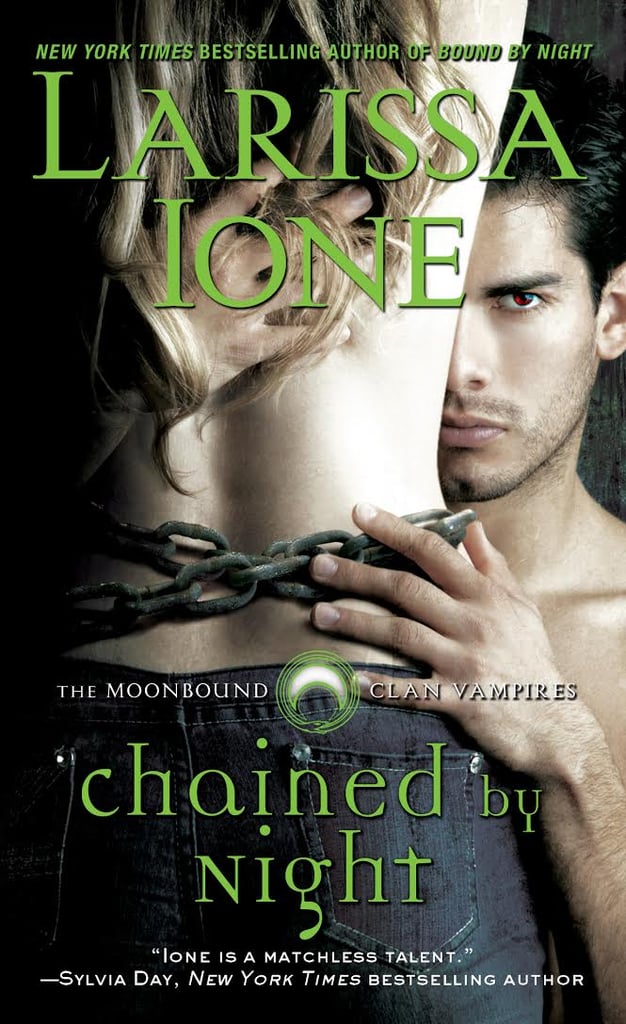 She arched her back, driving her pelvis into his, and suddenly, Hunter didn't care if it was a trick or not. He'd have been happy never to have sex with her, but hey, if she wanted to start this relationship now, he could deal. F*cking was f*cking, and clan business was clan business. He'd been prepared to separate the two for the rest of his life with Rasha, but maybe, just maybe, they wouldn't have to live like two angry cats in a cage.

The caress of her mouth as she sucked on his neck felt connected to his cock, and behind the fly of his jeans, he got rock-hard. The scent of her arousal, sweet and musky, rose all around him, ramping up his desire to toss her onto the futon and drive into her until they heated up the tiny cabin with the fury of their lust.

One hand still tangled in her silky hair, he dropped his other to her butt and hauled her more tightly against him. His erection met her core as he lifted them both onto the futon, being careful not to jostle her mouth away from his throat. He wanted her to take as much as she could, as much as she needed, and nothing was better than sex during feeding. When two vampires were connected that way, it was a closed circuit that delivered full-body orgasms like nothing else.

She moaned in response and shifted her body so they were stretched out on the hard mattress, him on top of her, rocking his sex against hers to the rhythm of her pulls on his vein. Heat roared through him, searing him from the inside out, and when she dug her nails into his shoulders, he growled in approval.

She was being much gentler than he thought she'd be. She'd always struck him as the sex-is-a-battle type of vampire, a female who would never give any male an inch of advantage, even in bed.

Cradling her head against his throat, he smoothed his hand up to her slim waist and over her rib cage. Her warmth radiated through her T-shirt, and her desire radiated from her entire body as he swept his thumb across the swell of her breast.

She gasped, breaking the seal on his throat, and a wet rivulet flowed down his skin. Her tongue flicked out to catch the stream, licking upward in a lazy, sensual stroke. When she reached the puncture from her bite, she latched on again, drawing like she was starving. He shouted at the ecstasy of it and thrust against her as though he was already inside her.

"Keep doing that." His voice was a guttural rasp he could barely hear over the sound of his pulse drumming in his ears. "Harder. Suck me harder."

A petite snarl rose in her throat, and if he thought he'd been hard before, he went painfully rod-stiff. His balls joined the party, throbbing and aching inside the prison of his denim pants.

Aylin's senses were on overload. Her skin was on fire, her breasts ached, and lightning danced along every nerve strand. And Hunter wasn't touching anything but her leg.

The fact that he didn't want to take her virginity stung, but his hand moving upward in a lazy, decadent climb, eased the pain. For now.

Don't think about later, she told herself. Nothing matters but . . . oh, holy damn, yes! His fingers brushed her core, wringing a strangled gasp from her. Pleasure zinged through her veins and molten, liquid heat pooled in her feminine place.

Bracing her firmly against him, he wedged his foot between hers and nudged them apart. She held her breath as he cupped her mound and slipped one finger between her folds.

"You're so wet," he murmured against her throat.

She squirmed, suddenly embarrassed. Was she supposed to be that wet? Was there something wrong with her?

"Easy, sweetheart." His guttural voice dripped with promise as he rubbed her in languid circles that somehow soothed her ache and made it worse. "I won't hurt you."

No, he was doing the very opposite, making her feel things she'd never felt, and those things could all be described as exquisite.

His finger dipped inside her, and her knees wobbled. "M-more," she breathed. She wanted him deeper, so deep she'd feel him there forever.

He obeyed, adding a finger and pushing deep. He hissed and rocked his hips into her ass. "Damn, you're tight."

He did something sinful with his fingers, stroked something inside that sent electric shocks of ecstasy through her entire pelvis. She clenched around him as he pumped in and out, and when he pressed his thumb against her clitoris, she cried out.

"That's it," he said hoarsely. "Ride my hand. I want you to come so hard you scream."

Scream? She could barely breathe, let alone scream. He withdrew his fingers, and that made her want to scream, but he plunged them back inside and whispered hot, naughty things in her ear.

Healthy Living
My Libido Disappeared After Going on the Pill, but This Natural Remedy Seemed to Help
by Jada Welch 11 hours ago