USA Today bestselling author Alexis Morgan revisits the world of the Paladins through the eyes of two new characters: a man who finally learns the truth behind the abilities he's tried to keep secret his entire life, and the woman who sees him as the hero of her heart.

Fifteen years after Emmett Stone was unjustly imprisoned for a brutal attack, the true aggressor came forward to tell the truth about that fatal night. Shortly before Emmett's release from prison, he's visited by two men who understand his strange ability to rapidly heal from anything, and why he's driven to protect those around him. And they have a very unusual job offer for him . . .

When Emmett cuts his hand at work, his boss insists he go to get stitched up. To keep up the charade of normalcy, Emmett goes to the free clinic, where he meets Jana. Instantly drawn to her quiet beauty and caring nature, he vows to protect her at all costs. But will his fierce protectiveness and hidden secrets cause Jana to run? Find out in Darkness Torn Asunder. 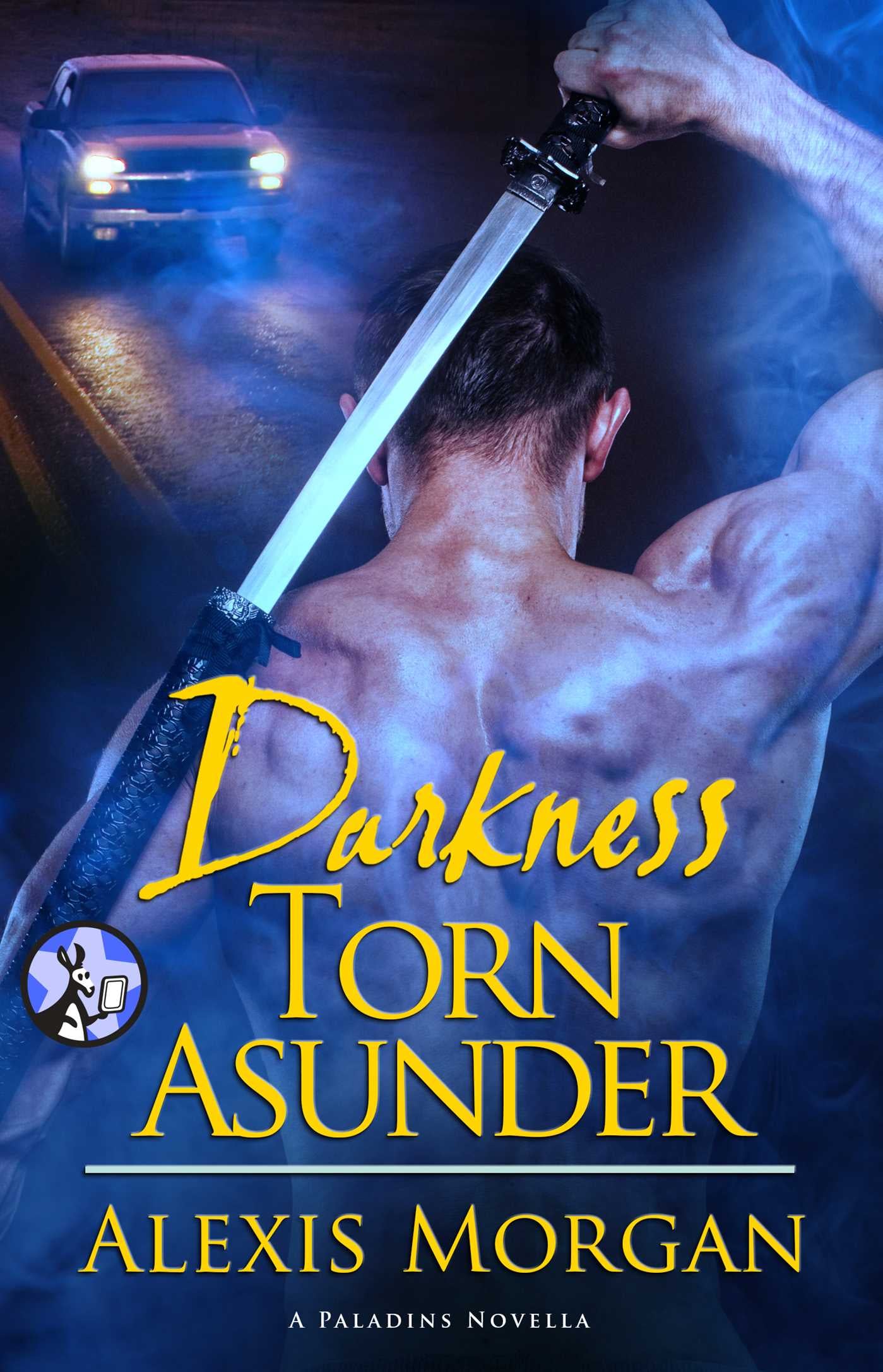 In the small bathroom, she touched up her lipstick and ran a brush through her hair. The knock on the front door came just as she finished. When she opened the door, Emmett backed up a step and gave her an admiring look from head to toe and back up again. When his gaze met hers again, his eyes were warm and approving.

She returned the favor, liking how he looked in black jeans and a Henley shirt in a deep gunmetal gray that matched the color of his eyes. "You're looking good there, Mr. Sloan. You clean up real nice."

"Thanks." His deep laugh rang out across the small lobby. "At least I think that was a compliment."

She liked making him laugh. She suspected he didn't do so nearly often enough. When she picked up her jacket, he took it from her and held it for her, an old-fashioned gesture she found surprising but appreciated. "I'll lock up, and we can go."

Emmett stepped between her and the door, blocking her way. "In a second, Jana. There's something I want to do first."

Before she could ask what that was, he enfolded Jana in his arms and kissed her. He kept it sweet and simple, his lips brushing gently across hers, a greeting rather than a claiming. Even so, a surge of hungry heat burned straight through to her core. Breathless and a bit shaken, she stared up at Emmett and was relieved to see he also looked a bit stunned by the power contained in that one little kiss. She didn't know about him, but she had to know if it was a fluke or if it had been only the beginning of something so much more.

This time she was the one who started the kiss, but Emmett was clearly a man of action. The second their lips touched, his arms tightened around her, drawing her flush against the hard planes of his body as his mouth settled firmly over hers. He deepened the kiss, his tongue sweeping in as if staging a daring raid. He tasted of coffee with a hint of peppermint toothpaste and healthy dollop of a spice that was all male and sexy as heck.

She wanted more, but her usual caution around men was already clamoring for her to listen. Fine, but she backed away slowly in the hope Emmett would recognize that her reluctance wasn't meant as rejection.

He loosened his fierce hold on her, giving her the space she needed and them both room to breathe. Emmett rested his forehead against hers. "I'd apologize for letting that get out of hand, but I'd be lying if I said I had any regrets about kissing you. I've been wanting to from the minute we met."

Emmett rose to his full height, casting a shadow on the bed as he kicked off his shoes. His fingers fumbled as he tried to undo the buttons on his jeans; she liked that she wasn't the only one who was trembling with need. Finally, he took a deep breath and flexed his hands as if trying to regain some control. This time he was more successful, and both his jeans and boxers went flying. She got her first look at her fully aroused lover and purred. Was all of that just for her?

Before joining her on the bed, he got several of the foil packets out of the box. After putting one on, he left the rest within easy reach.

The bed dipped when he finally lay down beside her, rolling her right into his waiting arms. He rose over her, his expression serious. "I'm a bit out of practice with all of this. I haven't . . . not since . . . well, let's just say it's been a long, long time."

She loved his honesty but wasn't sure how to respond. Finally, she decided on some direct action and took matters into her own hands.

Emmett wasn't sure how she'd react to his confession, but a second later she reached down to stroke his erection once, twice, three times. The sensation nearly drove him over the edge, but her next comment startled a laugh out of him. "Well, Emmett, all I can say is that it sure looks like everything is still in good working order."

All right, then. He couldn't remember any of the few girls he'd slept with ever being playful. He grinned back at her. "I guess there's only one way to find out for sure."

With that in mind, he eased Jana over onto her back and moved to cover her lush body with his own. She rewarded his efforts by drawing her legs up around his hips. He rocked against her, loving the small noises she made as the head of his erection rubbed against her cl*t. By the time she was digging her nails into his shoulders, he was more than ready to take it to the next level.

It took several short thrusts before her body took most all of him. God, she was so damn tight, but the fit was perfect. She gasped, though, when he pushed forward that last little bit of depth. It took what little sanity he had left to hold still long enough for her body to adjust to the sudden invasion. "Sorry, Jana. Did I hurt you?"

A second later, he felt her slowly relax beneath him. Still, no need to rush things. He kissed her again, his tongue moving in the same slow rhythm as his hips. Had he ever known anything as perfect as the way this woman's body fit to his? Not that he could remember.

"Emmett! Please, I need more!" Jana's kiss-swollen lips pouted as her body rose up to meet his. She stroked her palms down his back to grab his ass, causing him to flex hard and deep.

He held back again. "More of what? Tell me what you want, Jana."

Staring up at him with such amazing hunger in her eyes, she slid one hand between them, seeking out the point where their bodies were joined. "What I want is for you to give me everything you've got, Emmett. Now."

Get Darkness Torn Asunder here, and check out more great content on XOXO After Dark:

Back to the Attic with V.C. Andrews
Author Katy Evans the Manwhore Sequel!