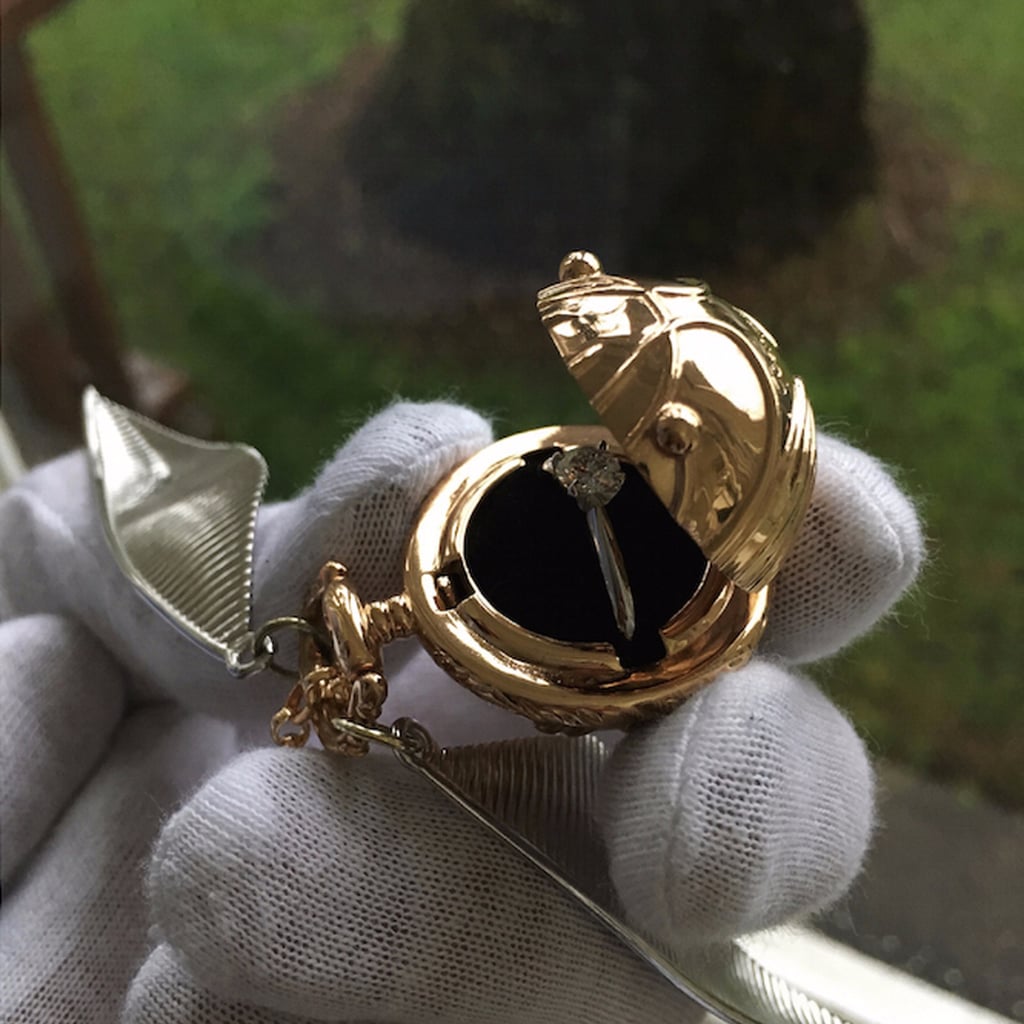 When Uriel Palma started thinking about ways he could propose to his girlfriend, Trechsel Hall, he knew he wanted it to be beyond magical.

As an infantryman in the US Army, Uriel stayed connected with his girlfriend while deployed by reading her favorite Harry Potter books. "I've only seen a few films but wasn't as invested in it as I am now," Uriel told POPSUGAR. "I read all the books while in Egypt and it gave us a new topic we could discuss." During this time oversees, Uriel used the books as well as some online inspiration to plan a Hogwarts-inspired proposal during an upcoming trip to Japan.

"I've always wanted to do something special, and flash mobs and random geek ideas wouldn't work while I was in Egypt, let alone in Germany where I'm stationed," Uriel told POPSUGAR. "So I just looked up random geek purposes and I saw the Snitch as an opportunity and took it."

Uriel enlisted Freeman Design to create a Quidditch charm that he could slip Trechsel's ring into. He then had it shipped to a friend in the United States who was in on the plan and brought the gold "box" to Japan, where they were all meeting for a vacation.

Uriel gave her the gift during their second night in Japan, and she had no idea that anything was inside.

The Golden Snitch can be worn as a necklace and, according to Freeman's website, is engraved with "I Open at the Close." Only a Nimbus 2000 broomstick key can open it, and when Uriel gave her the gift during their second night in Japan, Trechsel had no idea that anything was inside.

She placed the sweet gift in her purse, where she kept it for the remainder of the trip without knowing that she was actually carrying around her engagement ring. On the last night in Japan, Uriel took the broomstick key out and opened the Snitch on a rooftop that overlooked Tokyo.

"I wasn't really nervous until we arrived at that restaurant which was surprising because I'm an infantryman," he told POPSUGAR. "I'm trained to fight and win with no hesitation. Now I'm shaking thinking I hope the Snitch doesn't break or that I don't lose the broomstick."

When Uriel went to get down on one knee to ask for Trechsel's hand in marriage, she immediately stopped him. "As I was about to take a knee, she was like, 'No, don't kneel, stop!'" Uriel said. "All I can really say is how extremely shy she is and I think it's because of the people who were on the rooftop. She told me, 'If you kneel, I'll say no. I swear I will!'"

Uriel asked if that meant her answer was yes and her response was perfectly Trechsel: "Yes, it's a yes, now let's sit back down." See the adorable photos ahead!