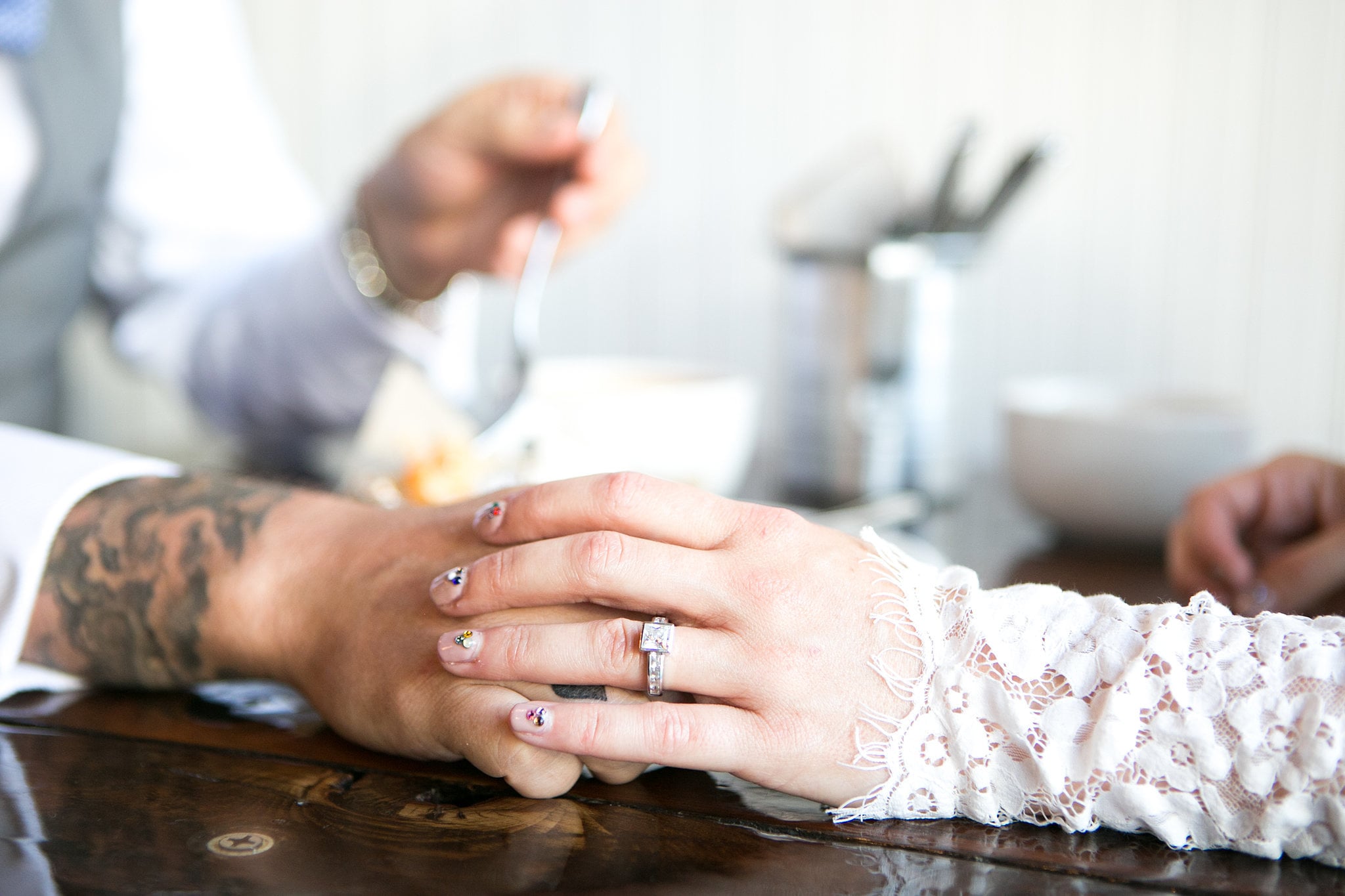 So you're thinking of getting engaged. You daydream about an elaborate proposal every night. You've got the whole fantasy laid out — all of those you hold most dear to your heart will be there. Your mom is sobbing (ugh, get a grip, Mom); your grandpa's clapping gleefully. Your best friend is giving you a big smile and a huge thumbs-up. And there, kneeling in front of you, is the love of your life, his eyes a little misty, his hands quivering with anticipation as he holds a soft velvet box, making a show of opening it, revealing a dazzling white rock that's so big it's basically an eyesore. And you gasp and cover your mouth, and one fat teardrop rolls down your cheek (but you still look perfect because you just happened to be wearing waterproof mascara that day). You say "YES!" a little too loudly, and all your friends and family cheer and whoop and holler, and your happy ending is finally, finally coming together in the most perfect way ever.

It's not that I'm opposed to love, but I am against proposals that are exclusively for show. Or for the wrong reasons. In fact, maybe your fantasy is a little too much about the proposal itself and not enough about the actual marriage (arguably the harder part). Before you force your partner into window-shopping jewelry stores, you should take time to reflect on why you crave it so badly. Because the truth is, you might not be ready — here are the telltale signs.

1. You only want it because it's what everyone else wants.

Ask yourself if this is what you really want or if it's what society really wants. With wedding stuff basically being shoved in our faces since we were little girls, it's easy to get caught up in the fairy-tale ideal. But the truth is, if it's not something you desire solely because you're insanely in love and would like nothing more than to spend the rest of your life with your SO — you should probably take a step back from the concept for now.

2. You don't often think about a future with your SO.

Kind of an obvious one — if it's difficult for you to picture a real future with your partner, for whatever reason — marriage (which is permanent, let me remind you) is a not-so-great idea.

You have the impending sense you just haven't seen all there is to see, and you kind of want to explore this big wide world . . . by yourself. Take that as a huge hint that a wedding shouldn't be at the top of your priorities.

4. You flirt with other people.

You can't seem to stop yourself from cozying up to random hotties at the bar — it comes as natural to you as taking a midday nap. Don't even think about getting engaged if you're still all touchy feely with people besides your SO. (Unless you guys are poly, which is a whole other ball game.)

5. Your family doesn't approve of your SO. At all.

Your dad makes a display of his rifle every time you bring your partner home, and your sister is constantly asking if you've broken up yet. This is a (major) indication that your SO simply isn't right for you. Always keep in mind that your family knows you better than anyone — after all, they've been there since you were born. Literally.

6. You're in a transitional stage in your life.

You're moving; you're about to graduate from law school; you got a new job; you're joining the Peace Corps. If you're in an era of big change in your life, you probably shouldn't be getting married . . . at least not right now.

7. You dread the idea of a wedding.

If the thought of a wedding just gives you the creeps (all that planning! Your drunk great uncle! The dress that's going to cost you, like, $40 million!), you're (probably) not ready for the next step. It's true that some people do yearn for the actual marriage but wish to skip the wedding part; however, it's not all too common. Think about why it weirds you out. Is it because it's not what you're really looking for?

Your friend from high school was proposed to in the most adorable way EVER — the three-minute long video had you shedding a few tears, and it got, like, 112 likes. If you're suddenly longing for a proposal yourself, it's time to rethink. Don't wish for it because your friend is suddenly getting showered with "awwww"s.

9. You have a general sense of restlessness.

If you feel antsy all the time, like you're stuck in a cage, waiting to be liberated — odds are, taking those vows would be a serious mistake. To be honest, it sounds like you may need to be single for a while.

10. You're not completely comfortable with your SO.

You're still too shy to pee in front of your SO, and you're embarrassed to dance to Rihanna when he or she is around. These are a few telltale signs that you have further get-to-knowing to do before you make that walk down the aisle.

11. The idea of "forever" really freaks you out.

The word evokes a weird choke-y reaction in you whenever someone says it, kind of like you're having a mini panic attack. Maybe it's not quite that extreme, but even so . . . if "forever" freaks you the f*ck out, do. Not. Get. Engaged.

You still rummage through your partner's phone every single time he or she jumps in the shower, and you don't even know why. It could be harmless curiosity, but it's most likely that you just don't have enough trust built up to sustain any sort of effective relationship, let alone marriage. (Yeah, the truth kind of hurts sometimes.)

13. You often imagine a different life for yourself.

You visualize what your life would be like without your SO more times than makes you comfortable. Who would you end up with? What would it be like? Would it be better? Pro tip: freeze right there in your tracks. You are, without a doubt, not ready to be married. In fact, you might want to reassess your current relationship, because maybe, just maybe, it's time to see what else is out there. And there's no shame in that!

Wedding
A Corgi Ring Bearer, a Polaroid Guest Book, and a Happy Couple! This Autumn Wedding Was Picture Perfect
by Haley Lyndes 1 day ago