We'd like to present this story from one of our favorite sites, Brides. Read about the childhood discovery that proved to this couple that their marriage was fate! 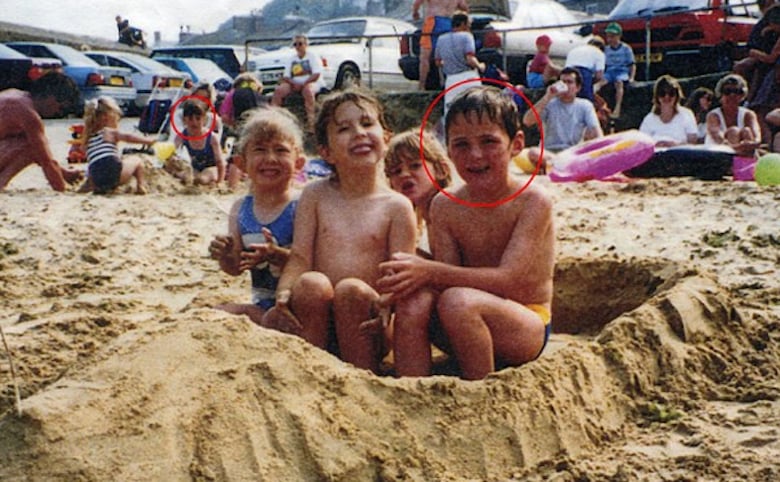 Talk about fate! British newlyweds Aimee Maiden and Nick Wheeler married in late July, but their relationship goes much further back than that. In fact, the couple first crossed paths 20 years before their wedding day.

The Telegraph reports that in preparation for their Summer wedding, Maiden and Wheeler were looking through childhood photos with the groom's family when they came across a shocking photo, seen above.

The picture, taken during a family vacation in Mousehole in Cornwall, England, shows Wheeler posing with his sister and cousins while sitting in a sand boat the trio had just built. But it's not the sandy craftsmanship that makes this photo special. Rather, it's the little girl playing with her own family just off to the left, looking directly at the photographer. Maiden instantly recognized herself as the photobomber in the two-decade-old snapshot.

The unlikely photo can't just be chalked up to proximity, either. Maiden grew up in Mousehole, while Wheeler grew up 300 miles away in Kent. The couple formally met while in college, 11 years after the shot was captured.

To make things even more interesting, the couple ended up tying the knot mere feet away from the site of their first encounter — without even knowing it was the place where their lives became intertwined. These two were seriously destined to be together, right?

Wedding
My Fiancé Chose His Wedding Tux Virtually During COVID-19, and It Honestly Put Us at Ease
by Sarah Wasilak 2 days ago

Wedding
I Have to Store My Wedding Dress For a Year, So I’m Using These Expert Tips to Keep It Safe
by Alessia Santoro 1 week ago