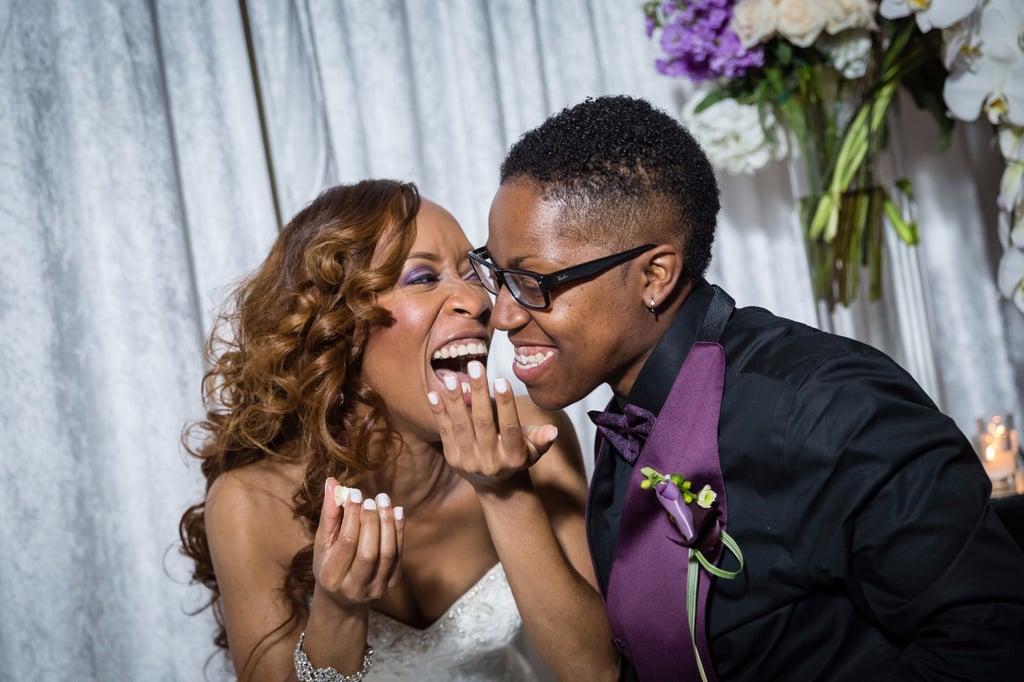 This Glitzy Purple Wedding Is the Perfect Ode to Prince

Sondatre first came across Lesley's photo on an online dating site and was instantly drawn in by her "smile that could melt a tub of ice," she told the photographer. The two met for an official dinner date after a few phone conversations, which was when their love really took off. They talked for hours and hardly even touched their food because they were laughing so much.

A year later, Lesley and Sondatre knew they wanted to marry each other. Sondatre planned a surprise proposal and told Lesley that they'd be attending a friend's surprise party. But when they walked onto the balcony area of the restaurant, Lesley was confused seeing 10 of their own closest friends who yelled "Surprise!" while her favorite song, "At Last" by Etta James, played in the background. One friend handed her 24 long-stem roses in her favorite color, purple. She finally realized who the party was for when Sondatre pulled out a box.

When it came to wedding planning, the couple decided to go with a Prince theme to celebrate Lesley's favorite musician. Their ceremony was named "Diamonds and Pearls," while the reception was "The Purple Rain Affair." To carry the theme out, their wedding colors were a mix of charcoal, purple, plum, and ivory with diamond, pearl, and mirror accents in the decor.

"Their wedding was full of the opulent glamour associated with the famous singer, but the most memorable moment was a surprise Lesley pulled together for Sondatre," the photographer said. Knowing Sondatre's passion for the arts, Lesley organized a professional dance group called Urban Soul and a local artist named Miriam to perform. The artist sang "Diamonds" by Rihanna with a three-piece band while the dancers performed their choreography.

"Sondatre and Lesley's wedding theme of Diamonds and Pearls definitely symbolizes their love: strong, beautiful, and enduring," the photographer said.

Wedding Beauty
Eloping This Summer? Watch This Tutorial For an Old Hollywood-Inspired Wedding Hairstyle
by Tori Crowther 9 hours ago

Wedding
These Brides Had the Sweetest Wedding, and Wait Until You See Their First Look
by Lauren Harano 3 days ago