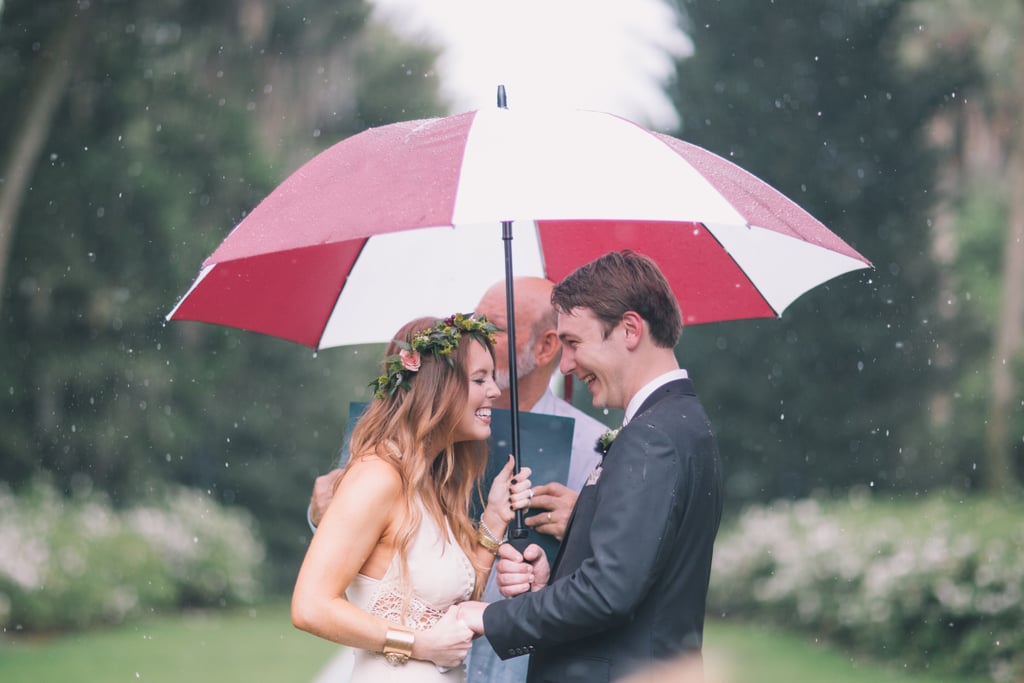 Rain Only Adds Romance to This Boho Wedding

I mean, is that not the cutest wedding photo? Ashley and Dan didn't let the rain get them down on their Tallahassee, FL, wedding day. After all, their proposal took place on a rainy St. Patrick's Day. Bride Ashley tells us, "I was feeling lazy, but he insisted we spend some alone time at the historic gardens by our home before the day's festivities. I tried to keep up with him as he raced through the gardens until he finally stopped in a secluded area covered with azaleas, got down on one knee, and asked me to be with him forever. I was in complete shock then pretty much tackled him." The couple then decided to have their wedding at the same location as the proposal — Alfred B. Maclay Gardens State Park.

There was no set color scheme, and they instead focused on pieces that felt authentic to their relationship and went from there. Ashley adds, "The result was a laid-back, bohemian setting filled with jewel tones, prints, elements from nature, string lights, vintage metals, peacock chairs, textures, and lots of flowers, candles, and crystals."

1. Walking down the aisle to "The Rain Song" by Led Zeppelin. Watching Dan's amazing smile as I held my father's arm was such a beautiful moment filled with endless love.
2. Exchanging our vows. We both worked very hard to pack as much meaning and promise into one-minute speeches, so we were both excited to hear each other's vows for the first time.
3. The big, funky dance party. Looking around the tent and seeing all our friends and family getting down made all the months of planning so very worth it!

1. My uncle married us with a ceremony we wrote ourselves that also incorporated parts of my grandparents' wedding ceremony, which was very special.
2. Our first dance was to "Into the Mystic" by Van Morrison. It's been "our song" as long as we've been together, and we felt like the only people in the room as we danced.
3. Before the wedding, I requested that the awesome band, Atlanta Funk Society, play "Eyes of the World" by the Grateful Dead. It's one of Ashley's favorite songs, so the look on her face was priceless when they began to play it.

Ashley then tells us her favorite moment from the day: "Probably the little moments where Dan and I secretly slipped away and took in the night together. I think it was important for us to step back from everything and just be. One specific moment I really cherish was when we left the reception and read our vows to each other again."