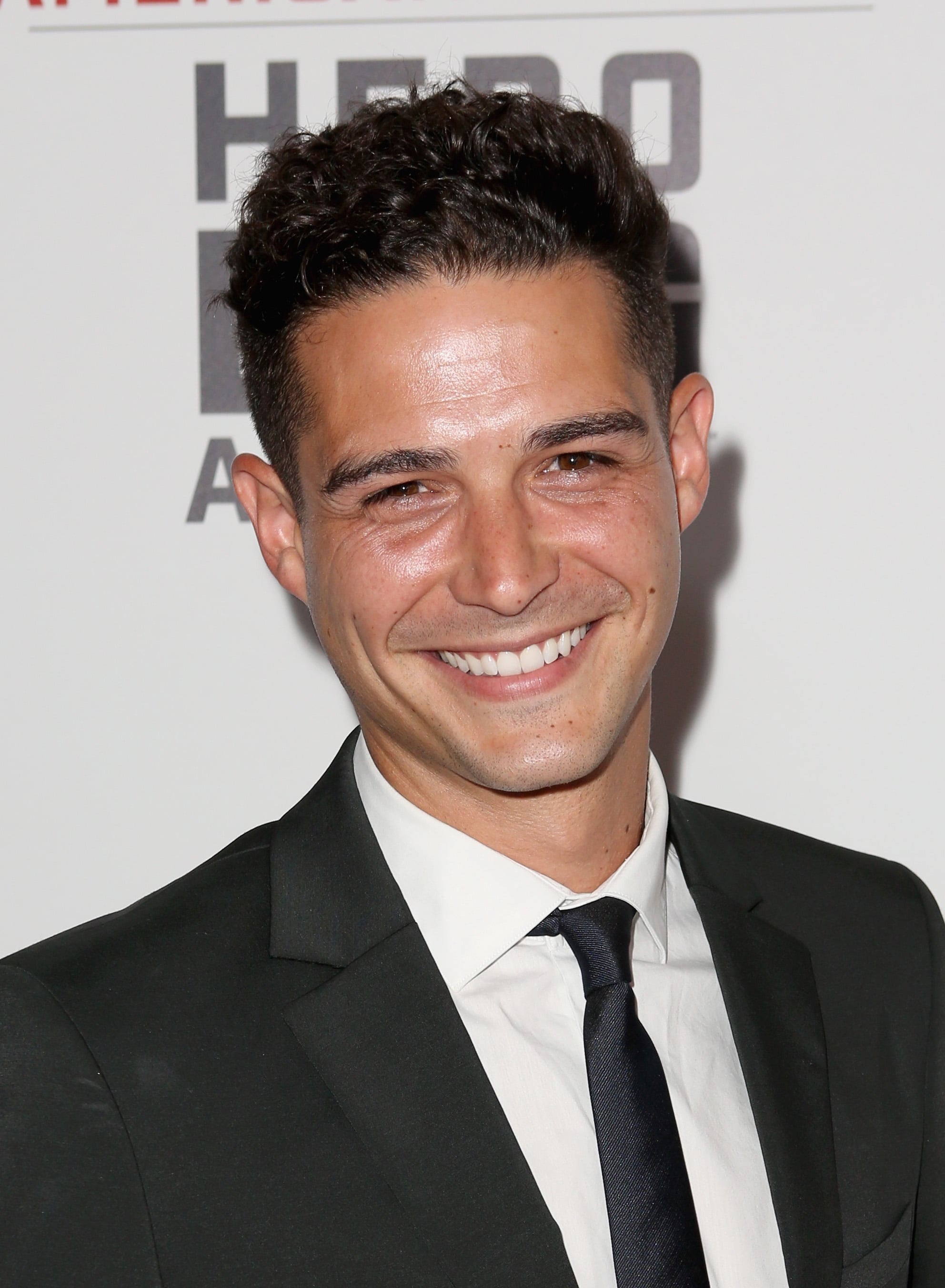 Along with plenty of drinks, Wells Adams served up some pretty damn good advice on the latest season of Bachelor in Paradise. Following previous appearances on The Bachelorette and BIP season three, Wells returned to Mexico this Summer to replace Jorge as the bartender. And bartending, of course, is partly about mixing cocktails, but it's also about the conversation — and, particularly in Paradise, the relationship advice. Wells won people over with his hilarious puppet reenactments, his witty one-liners, and the thoughtful tips he shared while behind the bar, so we reached out to pick his brain for his best dating advice.

Spoiler alert: he's as sharp and as charming as you'd expect, and he dropped sarcastic comments and insightful tips about everything from first dates to breakup protocol. Oh, and for the record, I did ask whether he'd appear on The Bachelor Winter Games spinoff (he won't) and what makes for a great kiss — because, yeah, that kiss with Danielle is pretty unforgettable.

POPSUGAR: So first of all, if someone asks you to hang out, how do you know whether it's a date vs. just hanging out? Do you have to base it on the vibe?
Wells Adams: It's so hard if it's two attractive people of the opposite sex going and hanging out. I assume everything is a date. If it's not, then it's a group hang, you know?

PS: Do you think it's better to play a little hard to get or just be more straightforward?
WA: I never play hard to get. [Laughs] I'm way too honest to do that.

PS: I'm going to call out some first date ideas, and I'd love for you to say whether it would make a good first date option or a bad one. Grabbing coffee?
WA: Yeah, that's great. I really like the go-to-lunch first date thing because it kind of takes the pressure off everything.

PS: What about brunch? Same deal?
WA: I think brunch is — well, you drink at brunch. And you can kind of get a little sloppy. And that's not super attractive. I like the lunch thing. I really do.

PS: What about dinner and a movie?
WA: First date for dinner and a movie is no good because you'll go to the movie and you don't talk to the person. I like a movie as a second date. I have a rule that I don't kiss on the first date, so I like it on the second date because then you do the thing where you, like, grab their hand in the movie and you can let the sexual tension build up, and then when the movie's over you, you know, push them up against the wall and kiss them.

PS: Can you tell me more about your first date rule?
WA: Obviously physical attraction is a very important thing, but a mental attraction to me is much more important. So I like the no-making-out rule on the first date. That's why I think the lunch thing is perfect — because you're not making out at two outside of a Sizzler . . . I don't take girls to Sizzler, by the way.

PS: That's a good disclaimer. Do you feel like there are any differences between dating in your 20s vs. your 30s?
WA: There's something really, really nice about dating mature women. In my 20s, I wasn't ready to settle down so I think I probably acted immature. I was focusing so much on my career that everyone took a backseat, even my exes, but that's what you're doing in your 20s. You're trying to build your life, and with me, I had such a defined goal that I wanted to reach that everything else took a backseat. I was probably a horrible person to date in my 20s. It's nice now that I'm in my 30s. Being with more mature women, it's nice — especially if they've got their stuff together. Once everyone's gotten their stuff together, then it's like, OK, we've got that, now we've got us. I like it a lot, actually.

PS: So what do you do if your pet — like, say, Carl the Bloodhound — doesn't like the person you're dating?
WA: There's never been a woman Carl has met and didn't like, so that's been really easy. He loves girls.

PS: What about meeting the family? When things are going well in a relationship, how do you know it's a good time to introduce the family?
WA: My siblings are the best things about me, so I want the person that I'm dating to meet them as soon as possible.

PS: Right, because when someone meets your family, then it feels like they really know you.
WA: Totally. They're all like shadows of you, right? I have my oldest brother, who's my best friend. He would be nice to anybody that I brought around because he just wants the best for me, so usually I can break someone in with the family with him. Next would be my closest sister, who has three kids, and you've got to pass that test. You get to see how they interact with kids. So I'll introduce my siblings first, and I'll usually hold off on my parents for a bit. I usually try to showcase my family as early as possible because they definitely make me look better.

PS: I can't talk to you and not ask about kissing after that kiss on Bachelor in Paradise. When you were on the Almost Famous podcast, you talked about your go-to kissing moves . . .
WA: I talked about my move, which is the suck-on-the-bottom-lip thing.

PS: And Ben's was biting the bottom lip.
WA: Yeah. Are you asking what makes a good kiss in terms of the girl?

PS: Yeah. Or something that makes it bad — like, "Oh, that was not an OK move."
WA: Someone who overutilizes tongue. That's kind of weird. It should be like a story. There needs to be peaks and valleys. It can't be the same move over and over again because then it gets really stale.

PS: I have a couple more general dating questions. If you're stuck in the friend zone, do you feel like there's a way out?
WA: I think first you have to ask the question: do you want to get out of the friend zone?

PS: True.
WA: If you really do, then the best way to do it I think is to get drunk with them and kind of admit it, you know? [Laughs] Then just see how they respond. Because if they respond positively, then you're out of the friend zone. And if they respond negatively, then the next morning you can be like, "Oh my god, I was so wasted. I'm so sorry. I can't believe I did that. How embarrassing."

PS: What if you meet someone you think a friend would be really interested in? Any thoughts on people giving out their friend's number?
WA: I think you have to do the thing were you show the guy what your friend looks like, and then vice versa, because everyone's got a different type, you know? Just because you think their personalities match up, they might not be their type. So you've got to feel that out, and then you can be like, "OK, I think you guys would be perfect for each other. Here's her number."

PS: What about breakups — any thoughts on whether you should unfollow people on social media after a breakup?
WA: Yeah, you should. I'm a big proponent of the unfollow, and you've got to cover everything. My last really, really serious girlfriend, I remember I unfollowed her on everything because it was painful to see, but I still followed her on Spotify and I would see what song she was listening to. That was like a dagger in my heart, because you can tell someone's mood by their music, you know?

PS: That's brutal. That reminds me of AIM away messages because everyone would write what song they were listening to and that's exactly what you were trying to do.
WA: Yeah, totally. It's also interesting because the second you fall for someone else or you've got this other thing going on in your life, then you're like, "I don't care about my ex anymore," and you can follow them back. Once you are totally cool and you know it's going to bug them to death that you're so happy, then you can follow them back.

PS: Exactly. So who do you turn to for dating advice?
WA: Chris Harrison.

PS: Somehow I feel like that is not true.
WA: It is not true. Love Chris, but that's not who I'm going to in times of need. My closest sister is usually my confidante in that stuff, or my oldest brother, but recently I've become really close with Ben Higgins. We were both in kind of similar places, I think, where we've been kind of drug around that reality TV dating world a lot and both have some bruises. We can relate to each another and we're both romantics at heart. We've been doing events together and we'll have a couple tequilas and get into it.

PS: Can I ask what kind of advice he's given you?
WA: [Laughs] It's a lot of us lamenting and consoling the other.

PS: Speaking of Ben, anything you can tell me about that Lip Sync Battle situation?
WA: I can tell you that it's really good.