I'm giving these out to women and young girls at King's Cross pic.twitter.com/EJQai8csH0

If you were in Kings Cross Station in London on Monday, you might have run into Sophia Tassew, better known as Riot Gal on Twitter. She was handing out notes with the title of "Boy Poison" on them to all the women and girls she encountered, and the notes included advice on standing up for yourself and being a dominant woman.

She encouraged women to look men directly in the eye, speak loudly, stand up for what they love, and think like a girl, among other things. She said she wanted to hand out these notes after being cut down so much in male-dominated workplaces and she didn't want other women to feel the same. "I think a lot of women might go through a similar thing where we're not sure how to react because we've been told to behave a certain way for so long," Tassew said, according to Mashable.

She wrote on Twitter that her notes were mostly met with confusion at first, but then she saw several people taking pictures of them, which encouraged her. She said since handing out the notes on Monday, she's gotten hundreds of messages from women saying they "needed" the note. "I actually had a lot of senior women in the creative industry tell me they can totally relate," she said.

Acts like Sophie's not only show her own confidence in standing up and being a proud woman, but they also encourage other women to do the same, which is what we need more of in this world. I can only hope that more women will take a page out of her book and continue to speak out and show the rest of the world just how badass women are.

Celebrity Families
Meghan Markle on Prince Harry Being a Feminist Father: "There's No Shame in Being" One
by Kate Schweitzer 2 weeks ago 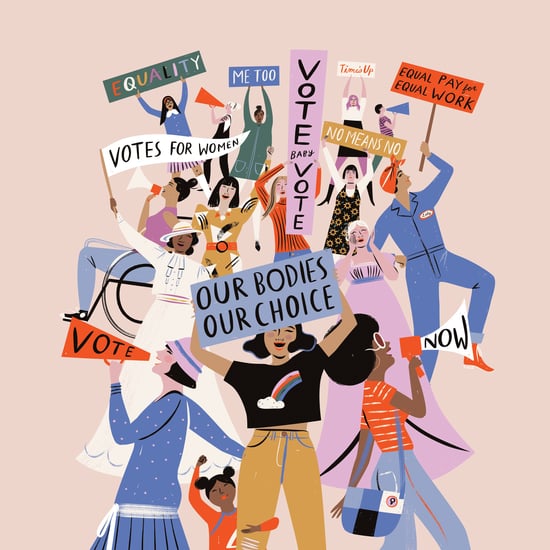 Women's Rights
Marking the Messy and Extraordinary History of the Suffrage Movement, 100 Years Later
by Lisa Peterson 3 weeks ago