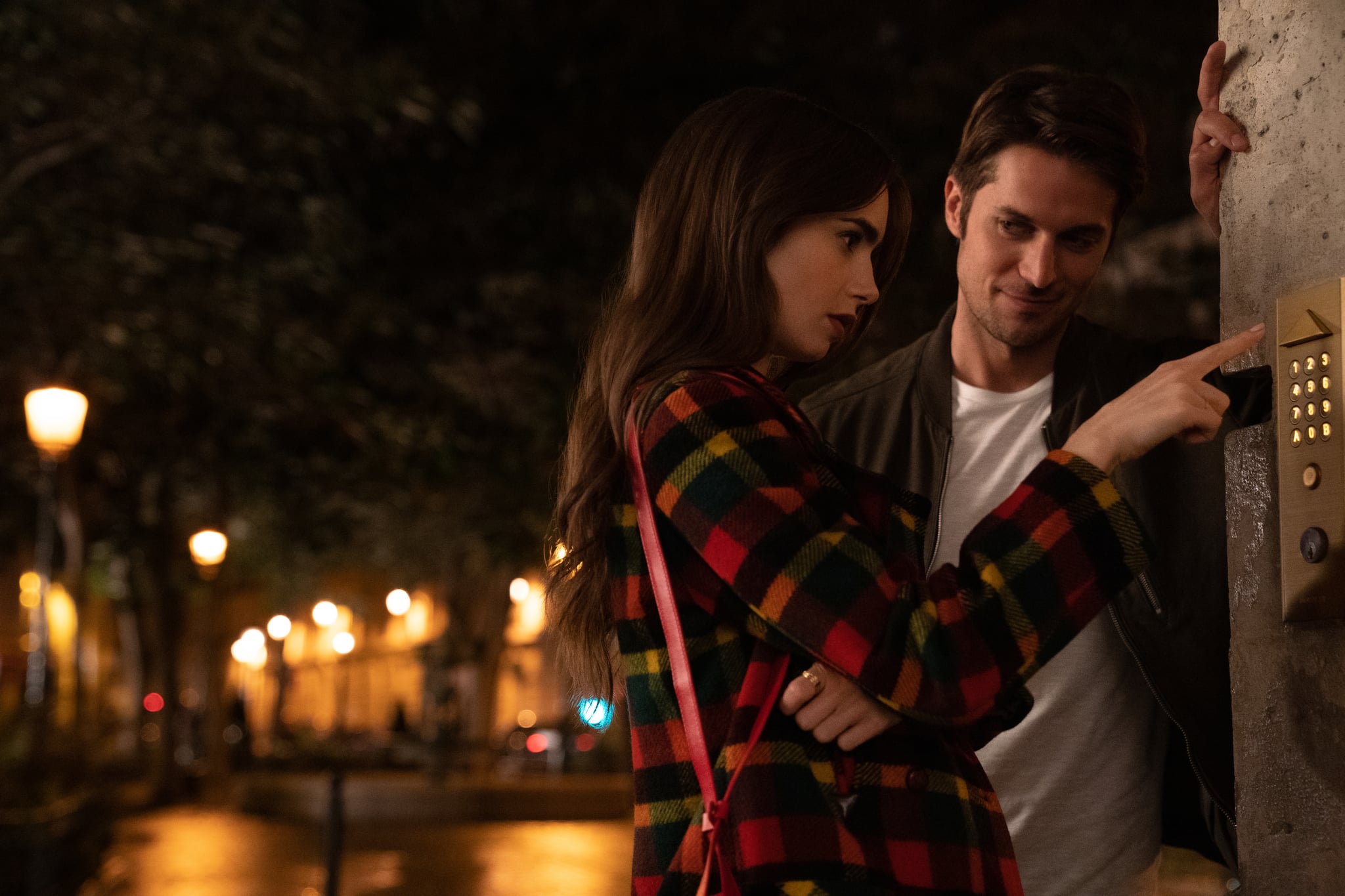 Emily in Paris is just the kind of bubblegum-touting, destination-porn, adorable show that 2020 needs. But all that sweetness comes with a bad side effect: are we letting Emily (Lily Collins) — and ourselves — sugarcoat actual moral dilemmas just for the sake of being cute?

Let's be real, no matter how handsome Emily's slew of Frenchmen are, nor how fabulous the outfits, Emily in Paris glaringly leans into a cringeworthy world where sexual harassment, cheating boyfriends, and leering clients are all part of the fantasy. In a post-#MeToo world, the Netflix hit attempts to tackle the "is it sexy in France but sexist in America?" overarching theme but does more harm than good.

Critics in the City of Love have bashed the series for its portrayal of the nation and fueling French stereotypes. In his review for Premiere, Charles Martin wrote: "[In Emily in Paris] we learn that the French are 'all bad' (yes, yes), that they are lazy and never arrive at the office before the end of the morning, that they are flirtatious and not really attached to the concept of loyalty, that they are sexist and backward, and of course, that they have a questionable relationship with showering. Yes, no cliché is spared, not even the weakest." Emily, though, revels in the misogyny and sexual politics while donning a lopsided beret and a ringarde purse charm. Ultimately, Emily in Paris glamorizes the patriarchy more than its fashion choices, leaving Emily's Parisian adventures harmfully confusing rather than aspirational for young viewers.

Emily's coworkers Julien and Luc may be the comic relief, but after they explain in detail how the Eiffel Tower sex position works, Emily merely laughs it off. "Well, I'd love to stay and educate you on workplace harassment, but I've got a lunch!"

Emily is simultaneously viewed as a naive ingenue and a marketing boss babe; played by a 31-year-old Collins, Emily's thoughtlessness is too cringey to be considered adorable. Seriously, who ships Trader Joe's peanut butter internationally and then is surprised when it explodes in the mail? She consistently dresses like a confused middle schooler, adding to her "fish out of water" persona, drunkenly loses track of a million-dollar watch, and lands ass-first into a new account after Gossip Girl fangirling. Did we mention the account was almost lost because of her own blunder the day before?

The audience is supposed to root for Emily's budding romance with downstairs neighbor Gabriel (Lucas Bravo) while Emily herself still has a long-distance boyfriend, albeit short-lived. Later, even after Emily and Gabriel kiss in his cozy restaurant, Gabriel fails to mention he has a stunningly kind girlfriend, Camille (Camille Razat). Emily becomes fast friends with the blond beauty, all while harboring feelings for Gabriel. She loudly has sex on the floor above him with the implication to make him jealous, and as Camille laughs, Gabriel annoyedly huffs into a pillow. The second Camille is out of town, Emily locks lips again with Gabriel at a nightclub. Ultimately, after a flimsy excuse for Gabriel to fully part ways with Camille, Emily and her guilt-free conscience can sleep with him — backstabbing her friend, but still getting the man. Did Emily not learn the girl code in Chicago?

When perfumer client and Sylvie's lover Antoine (William Abadie) flirtatiously explains the allure of an empowered woman to Emily, she blatantly doesn't realize the irony. Antoine later gifts Emily a La Perla lingerie set; as she thanks him for the present while pointing out its inappropriate tone, Antoine challenges her assumption. "Is that what you think, I bought it for me?" he asks. "I didn't buy it for me, it was for you. I wanted you to feel sexy and powerful, a bold woman unafraid to take on the world. Even Paris. But I apologize."

Related:
7 Things We Want to See on Emily in Paris Season 2 Instead of a Love Triangle

This is followed by a "tidy box" double-entendre joke, and it's clear Antoine is not supposed to be the villain: he is Emily's beacon for the true French experience, ushering in both her sexual liberation and workplace confidence. It is Antoine, not Sylvie, who encourages Emily to speak up about a nude perfume ad; it is Antoine who applauds Emily's quick thinking to pair a hotel client with his parfumerie. Antoine also is the one who ultimately saves Gabriel's restaurant, tangentially encouraging Emily's new affair. While showrunner Darren Star claims Antoine is "not to be trusted" ahead of a possible second season, why is Antoine then the only seemingly mature French male figure? And why should we even be cornered to think that about a married client gifting Emily lingerie?

Perhaps it is because Antoine is the sole man on the series who isn't crass or condescending. Emily's coworkers Julien (Samuel Arnold) and Luc (Bruno Gouery) may be the comic relief, but after they explain in detail how the Eiffel Tower sex position works, Emily merely laughs it off. "Well, I'd love to stay and educate you on workplace harassment, but I've got a lunch!" She later "gets back at them" by gifting the pair a large phallic-shaped cake, complete with frosting at the tip. Emily smiles and cocks her head, with a subtle wink to the fact that if she can't beat them, she must join them. It's all fun and games, after all.

Emily's other romantic interests range from a drunken boy at a party who whispers in her ear that he "loves American p*ssy" to academic Thomas (Julien Floreancig), who seems promising at first but quickly is revealed to be a petty, jealous snob. After throwing a tantrum at being invited to Swan Lake ("it's for tourists"), Thomas promises Emily would have more fun in bed with him, calling her simple-minded but beautiful. "I'll treat you to some amazing sex," Thomas mutters. "I think we'll both like that better."

It's like a checklist of antifeminism: Objectification? Check. Insulting intelligence? Check. Encouraging man-child behavior? Well, Emily really stands up for herself by guffawing and then flipping him off before running upstairs to prove she is not a basic b*tch (ringarde) by explaining her passion for purse accessories to a high-fashion designer. It turns out, those tacky charms are symbols of unattainable couture to young people everywhere. But what is attainable, Emily, is some self-worth.

Eric Dane
Nate's Dad's DVD Is Missing on Euphoria — Who Took It?
by Toria Clarke 12 hours ago

Identity
Why Do Latinx Shows Keep Getting Canceled?
by Johanna Ferreira 13 hours ago

Personal Essay
As a Black Fashion Editor, I Have People Like André Leon Talley to Thank For My Dreams
by Shelcy Joseph 14 hours ago