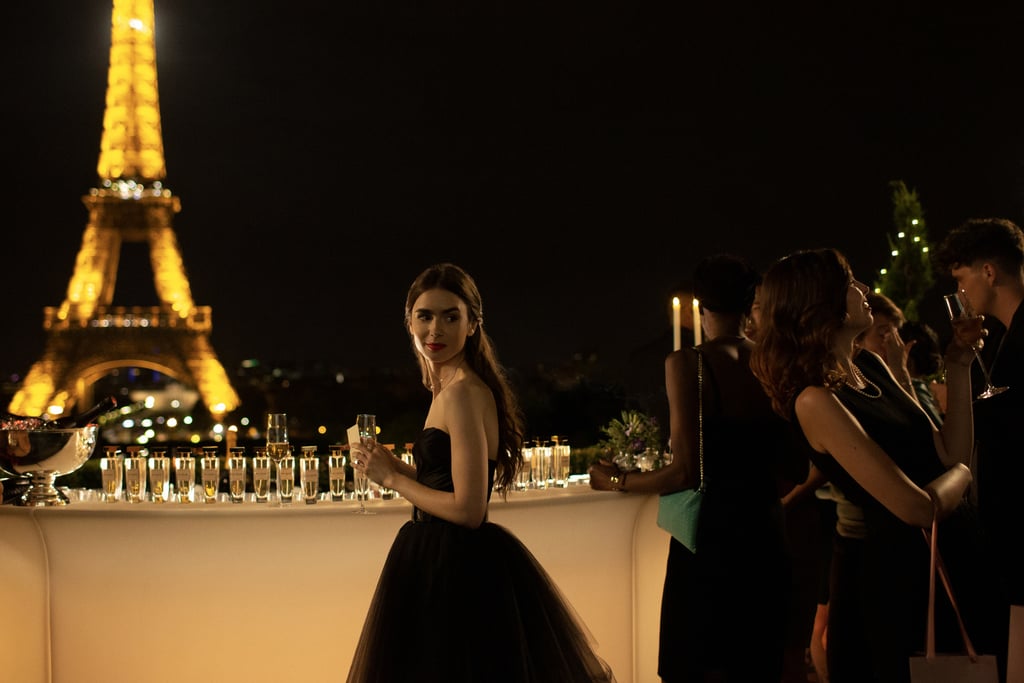 If you're a fashion fan who's long fantasized about another Sex and the City-level show to love, you may be getting your wish with the release of Neflix's Emily in Paris. The series, starring Lily Collins, has piqued the interest of Gossip Girl and Sex and the City stans, due in large part to its highly anticipated wardrobe — and that's all thanks to Patricia Field's costume design. Patricia, who's legendary handiwork is behind Carrie Bradshaw's iconic outfits, teamed up with SATC creator Darren Star once again to bring this series to life, and the similarities don't stop there. Field, too, sees the inclinations both Emily and Carrie share, even paying tribute to Bradshaw with a specific look in the show. "Emily's black tulle skirt in Episode 102 is an homage to Carrie's tulle skirt in the series finale of Sex and the City," she said in a press release.

"It's a dream for any young gal to find herself in Paris — first Carrie Bradshaw, now Emily Cooper. Paris is a fashion dream, and I think that women who love fashion can feel that in the city."

You'll find the mark of Patricia's costuming evident throughout, namely her "signature optimism", which she describes as "the idea that women everywhere can go into their closets and reimagine, remix what's hanging there in ways they've never thought of before." What's more, the costumes, which center around Emily's experience as a young professional who's moved to Paris, draw heavily from the setting itself. While Field is a self-professed New Yorker, even she is quick to recognize the overwhelming influence of the fashion capital: "Paris is Paris. It's a dream for any young gal to find herself in Paris — first Carrie Bradshaw, now Emily Cooper. Paris is a fashion dream, and I think that women who love fashion can feel that in the city."

Ahead of the series' October release, we went straight to Patricia to get the scoop on the costumes, collaborating with Lily Collins, and bringing this dream-worthy wardrobe to life on screen. Read on for our complete interview, then peruse the costumes for yourself.

POPSUGAR: Did you know right off the bat any designers/key pieces you were excited to secure for the show?
Patricia Field: Right off the bat, I can say I was excited to visit Chanel in Paris based on my success with Chanel in The Devil Wears Prada. As Lily Collins is so tiny, I thought I would interpret Chanel as "oversize," giving it a younger interpretation.

PS: Did Lily have any input when it came to costumes?
PF: Lily had much interest and input in her costumes, and that made me happy as we were able to collaborate together. An example would be Christian Louboutin!

PS: With Paris being such a fashion destination, how did that influence the wardrobe and the designers/wardrobe choices you made for Emily and the show as a whole?
PF: Aside from Emily, all the actors of the show were either French or Asian. Luckily I had a wonderful and experienced Parisian costume designer that I worked with, by the name of Marilyn Fitoussi, who filled in the French blanks when they occurred. However, my main inspiration was an American in Paris, like the movie. In my mind, I always romanticized the American infatuation with fashion in Paris.

My main inspiration was an American in Paris, like the movie. In my mind, I always romanticized the American infatuation with fashion in Paris.

PS: There are so many comparisons being made between Carrie Bradshaw and Emily, and this show and SATC. What about the characters felt similar to you while working on the costumes?
PF: Fortunately, both leading ladies of Sex and the City and Emily in Paris were very collaborative and had that fashion sense in common. For me as a designer, I welcome actors who are interested in collaborating.

PS: Is there a look you think best embodies Emily's style as a whole or that you suspect will become the most memorable? PF: Regarding Emily's style as a whole, an important aspect was how she developed from an American girl from Chicago and picked up points from French chic. For me, one of the most fun outfits was a patchwork dress by an artist I represent in New York, as part of my ARTFashion Gallery, by the name of Dope Tavio. Dope Tavio is original and oversize at the same time. I literally reconstructed the oversize dress to fit little Lily and paired it with a Chanel jacket.

PS: At this moment while we're all staying home, screen style has really become a bigger part of our lives — even more so in the absence of our typical celebrity style. What do you hope viewers connect to in this show and see in the costumes here?
PF: I always want my wardrobe picks to be original and interesting. I believe these two features create classics that last through the years as opposed to trendy and gone tomorrow.

by Terry Carter 20 hours ago