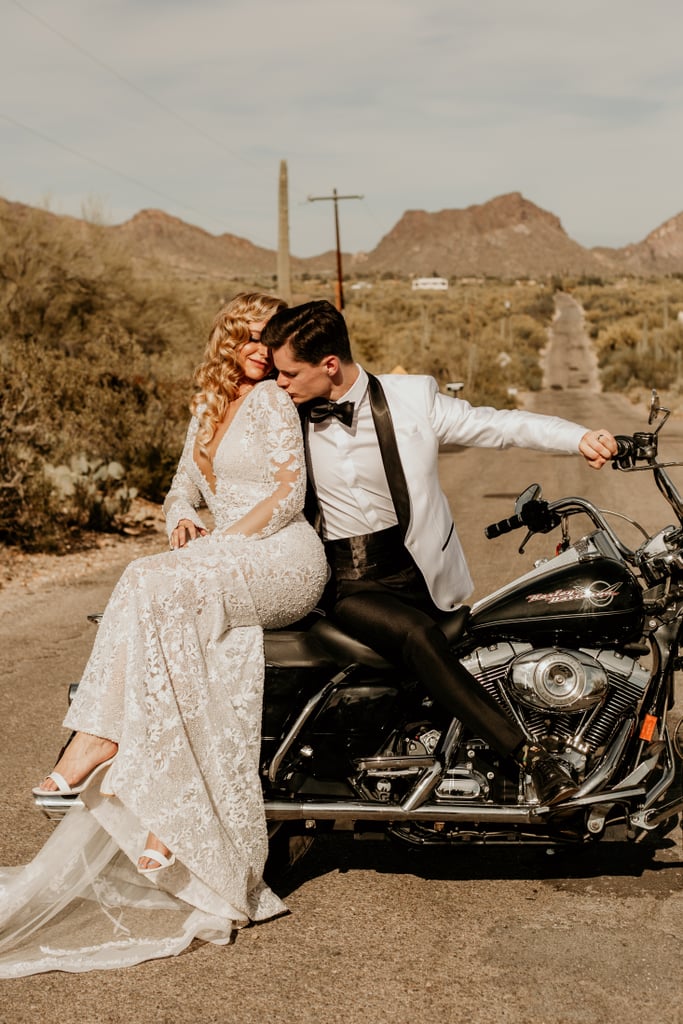 This Couple Modernized Their Bridal Parties, and the "Groomswomen's" Suits Are Killer!

Cailey and Brendan first met at a jewelry store in 2016. Brendan was the store's manager in training, and Cailey was on the hunt for a rose gold chain for her new necklace. Despite Cailey's bad mood that day and being very ill with Lyme disease, she still talked to Brendan, engaging in a discussion about relationships as she tried on different chains. Although Cailey returned the chain she bought, both she and Brendan kept each other in the back of their minds. Months later, Cailey recovered from her long battle with Lyme disease and got a job at the same jewelry store where she'd met Brendan, who happily asked her out. One thing led to another, and suddenly, Cailey was living across the country with her newfound love. A year later, Brendan proposed.

Arizona was Cailey's dream wedding destination. She enjoyed the desert's mountainous backdrop and plentiful cacti, and even chose to get married when her favorite white cactus was in bloom. Tucson's beautiful desert background was the perfect match to the pair's wedding colors — white, black, and gold — as well as their unique vintage and art deco style. There wasn't one thing about Cailey and Brendan's wedding that wasn't one-of-a-kind, from the motorcycle Cailey rode down the aisle on to their taco and pizza catering choices, and even their wedding parties! Brendan's party had Cailey's sisters as "groomswomen" in all-black suits, and Cailey had Brendan's brother as one of her bridesmaids.

The wedding was everything the pair had dreamed of, and similarly, so was their wardrobe. Cailey wore a gorgeous long-sleeved beaded dress with a low-cut front and back. Her shoes were inspired by her favorite movie, Cinderella, and her veil was 23 inches long and designed and created by her mother, Carla.

The accessories were just as touching, as Cailey wore a diamond necklace given to her by her parents when she was sick, a diamond bracelet from her soon-to-be husband, and a set of pear-shaped crystal earrings. Brendan wore a custom suit with black pants, a white blazer, silk black lapels, and a custom white shirt. Inside Brendan's jacket was inscribed the message "in sickness and in health," referencing Cailey's 11-year battle with Lyme disease.

Cailey and Brendan's big day was intimate, touching, beautiful, and loads of fun. From the motorcycle rides to their personalized thank-you cards at every table, you don't want to miss out on this exquisite event. See all the photos from the pair's touching day ahead.

Related:
Even a Hurricane Could Not Stop This Couple's Wedding, and the Photos Are Just, Wow
Previous Next Start Slideshow
WeddingReal WeddingsDestination Weddings