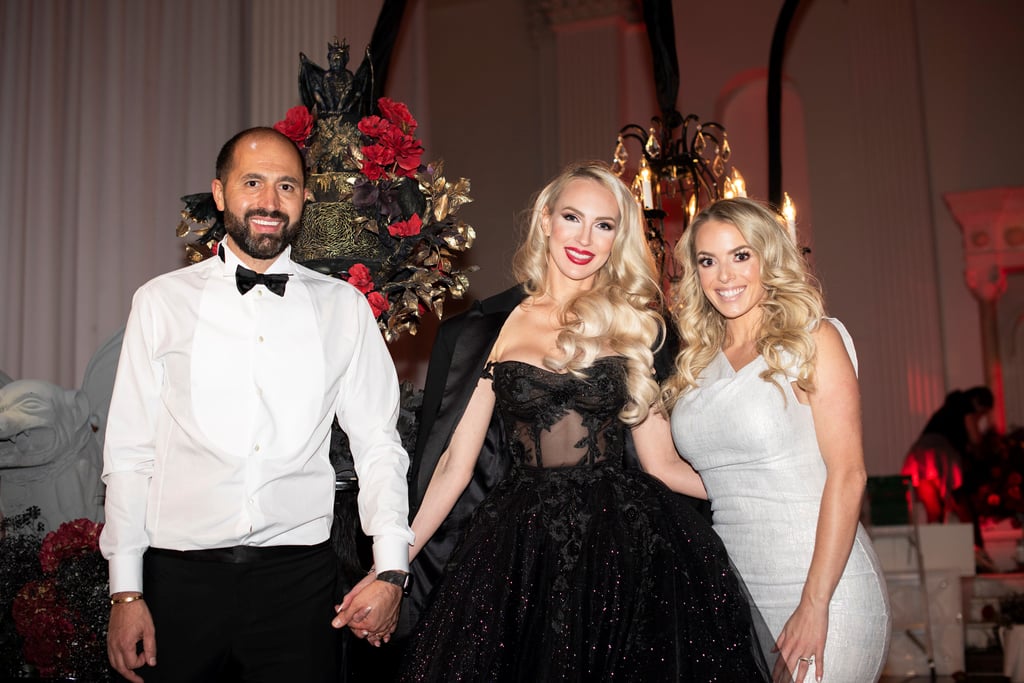 If you watch Selling Sunset then you know that Christine Quinn knows how to throw a party. The third season of the Netflix reality series concluded with Quinn's wedding to retired software engineer Christian Richard, and — just like her season two engagement party — her nuptials put the "extra" in extravagant . . . and that's putting it lightly! But that shouldn't be a surprise, considering both celebrations were planned by Lisa Lafferty (pictured with the couple above), a high-end event planner, creative director, and culinary curator that's catered to some of LA's biggest stars. POPSUGAR recently spoke to Lafferty to get all the details on Quinn's lavish, gothic, winter-wonderland-themed wedding.

According to Lafferty, Quinn had a very specific vision for her big day. "Christine initially described her wedding vision as a winter wonderland dream with lots of snow, ice, dreamy twinkling lights, a lot of theatrical elements — oh, and a bleeding cake," Lafferty told POPSUGAR. "After the bleeding cake comment, I knew this wedding needed to have a wicked side — classic Christine Quinn-style. So, when [we] discussed the thought of doing a wicked twist, Christine and Christian loved it." Must-haves for Quinn included falling snow, smoking cocktails, live swans, show-stopping ice sculptures, and — of course — that bleeding cake.

For the winter wonderland ceremony, Lafferty drew inspiration from Chronicles of Narnia with a touch of Swan Lake. Then, for the "wicked" reception, Lafferty gave the space "sexy, gothic movie" vibes with skulls, gargoyles, and dramatic music. Since the same room was used for both the ceremony and the reception, Lafferty says the most difficult aspect of the event was transforming the winter wonderland ceremony space into the "wicked wonderland" reception in only 90 minutes while guests enjoyed cocktails outside (but, luckily, Lafferty and her team had over 130 staff members to help out). Keep scrolling for even more incredible details and photos of the unforgettable event.

Related:
These Are the 10 Most Expensive Homes on Selling Sunset, Including That Unreal $75 Million Mansion
Previous Next Start Slideshow
Celebrity WeddingsWeddingSelling Sunset

Issa Rae
Issa Rae and Louis Diame's Wedding in the South of France Was So Stunning, We're Taking Notes
by Haley Lyndes 1 day ago