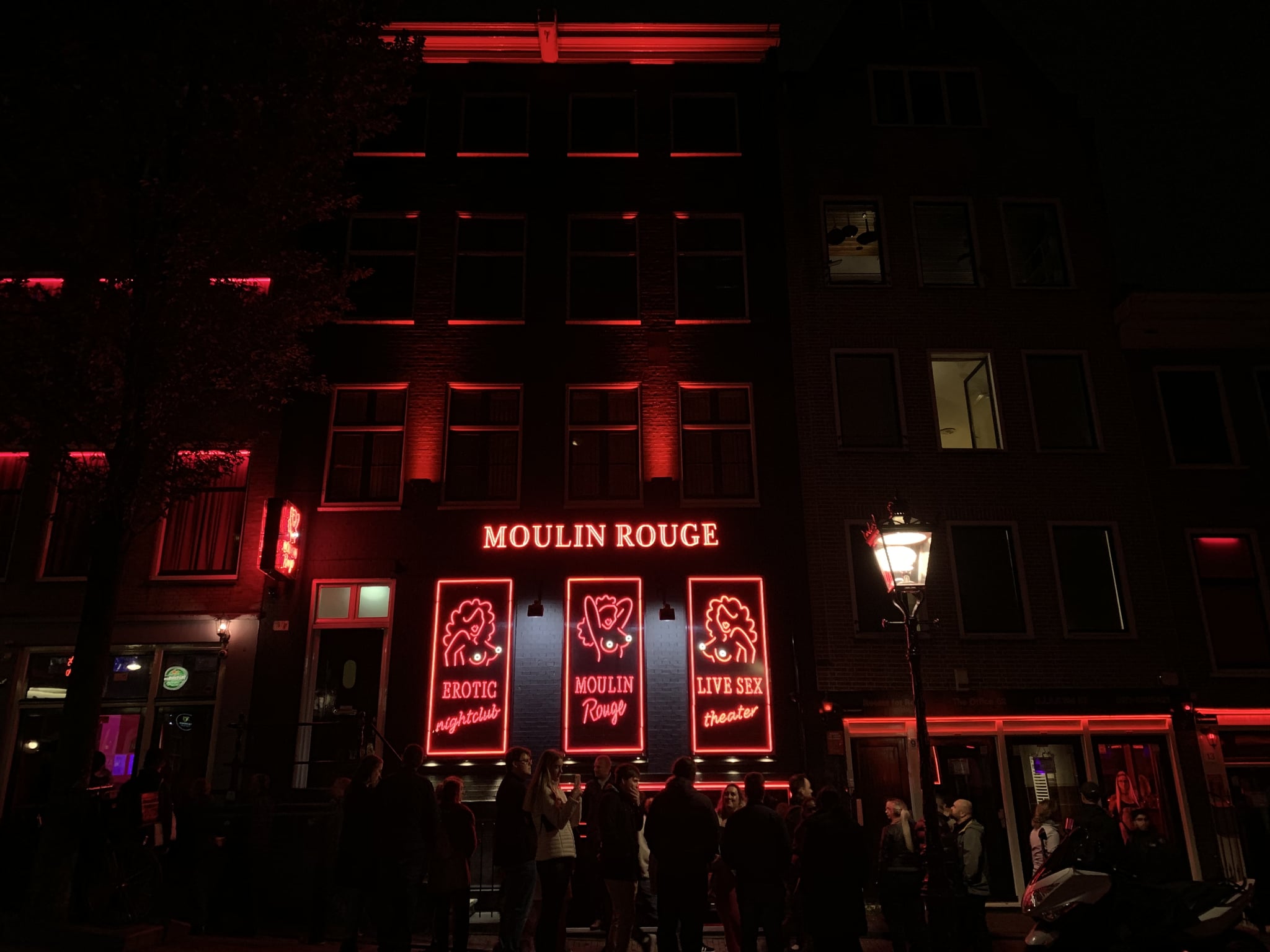 Say it with me . . . sex work is real work. In fact, sex work should be respected as a line of real work that has the possibility to be enjoyable, liberating, and a lucrative line of business.

As a society, we tend to shut down around taboo topics like sex and prostitution, but as feminists, and in light of Women's History Month, it is crucial that we recognize sex workers as autonomous individuals. Sex work has typically developed the reputation as reinforcing unequal gender relations by promoting female victimization and objectification. While I am in no way invalidating female objectification and subjugation, I want to highlight that it is also imperative we recognize sex work as a potentially empowering and pleasurable line of work for those who choose to pursue it. Of course, it must be 100 percent consensual between two adults.

Sex work can allow women to creatively express their sexuality and take pride in their occupation.

Prostitution is not legal in the United States (which is an entirely different conversation), but the Netherlands and other European countries have legalized it. Under circumstances where sex work is legalized and safe, and where sex workers have legal rights and social benefits, sex work can allow women to creatively express their sexuality and take pride in their occupation. Sex worker Felcia (last names have been omitted for privacy), who has worked in the Red Light District of Amsterdam for almost 15 years now, told POPSUGAR that she "enjoys dressing up" for her clients, "finds pleasure and excitement" in her work, and "is made to feel attractive, desired, and worthy." Felcia also made clear that she has experienced "significant personal growth" in sex work and hopes that others will view her as an independent woman who is willingly choosing sex work as her occupation. Not only does Felcia find fulfillment and take pride in her work, but she is also able to financially support herself and her son.

In the US, sex work is frequently deemed as dirty and immoral, but it is absolutely imperative that we break this narrative and recognize alternative possibilities. When the potential positive gains of sex work are completely disregarded and only the negative aspects are discussed, we run the risk of reinforcing the notion that sex workers are solely victims who should be ashamed. In 2021, I think we can all agree that female sexuality should be respected and appreciated, so instead of silencing and shaming women for their career choices, let's empower and support them.

POPSUGAR also spoke with Lily, who has been a sex worker for the past five years, and she stated that "sex work [has] evoked a sexual revolution." She explained that she willingly partakes in sex work as she finds her occupation to be "empowering, gratifying, and has allowed [her] to feel beautiful for who [she] is." Lily's experience is a direct example that women can willingly engage in sex work, gain an independent sense of sexuality, and take pride in their work.

Related:
Sensuality Coach Anjua Maximo on Women Unapologetically Owning Their Sexuality: "It Belongs to You"

And while I am an avid believer that sex work should be recognized as an outlet of female sexuality, which can promote the exploration of the body, sensuality, and pride, I absolutely do not deny or negate the daily dangers and oppression that sex workers face. Sex work can involve violence and force against women, and it is imperative to understand and reduce the systematic violence and stigma that permeates the field. There is a clear distinction between autonomous sex work and human trafficking, and we must all do our part to end sexual slavery and recognize exploitation.

Sex work can be empowering, but being able to feel that empowerment comes much easier to cis white women, which is why having more of these conversations is so important, so that all women can feel safe in their work. We can't talk about sex work without looking at it through an intersectional lens and recognizing that women of color and transgender sex workers are particularly vulnerable to sexual violence. In areas where sex work is legalized, women of color are more than twice as likely than their white counterparts to experience violence, higher rates of customer sexual abuse, and police brutality. A report from the National Center For Transgender Equality found that nearly 40 percent of Black and multicultural sex workers have been subjected to pervasive harassment and brutality. Sex work violence is a racial justice issue, and we must acknowledge the violence that targets women of color. The discrimination and marginalization that women of color face in the sex work industry perpetuates systematic violence and furthers racist beliefs and exploitation.

Transgender individuals also face disproportionate levels of violence and discrimination by their customers, as well as the police. According to the National Transgender Discrimination Survey, 22 percent of respondents who have interacted with the police have reported harassment such as inappropriate touching, humiliation, and violence at the hands of law enforcement. This violence creates an unsafe environment for transgender sex works and a fear of reporting client violence to the police. Transgender sex workers are also 6.2 times more likely to experience violence compared to cis white sex workers, and while transgender sex workers experience heightened levels of harassment and abuse, the lack of police enforcement and protection further reinforces unsafe conditions.

POPSUGAR spoke with Jess, a trans woman who has been working in the sex industry for the past 10 years. While Jess has had a positive experience in the industry, and stated that sex work has been "instrumental in her gender identity," she explained that her transgender coworkers have faced elevated discrimination. The harassment from male clients invalidating their gender identity is degrading and can become violent, and the lack of trust in police protection is unacceptable. While Jess made known that the male clients who purchase her services "personally validate" her gender performance and female identity, she does lack trust in law enforcement. Instead of being a safe resource to ensure protection, the police are known within the industry to specifically target transgender sex workers and invalidate their gender identity. The discrimination from police creates a relationship of distrust and fear, which limits access to justice for transgender sex workers.

Whether these women engage in sex work as their lucrative source of income, a way to explore their sexuality and identity, or for self-gratification, let's respect their choices instead of discrediting their work.

According to the Global Network and Sex Work Projects, training for law enforcement directed specifically to the needs and disproportionate violence against transgender sex workers and women of color must be mandatory in order to ensure safe working conditions. Educating law enforcement on the racist and transphobic violence that occurs in the sex industry is crucial in implementing safety standards and protection. In addition, legal and policy-based legislation for marginalized groups of sex workers must be passed to address impunity and the lack of a fair investigation when reporting violence.

While Jess stated that sex work has positively impacted her life in that "the hyperfeminine performance that her job requires allows her to embody femininity, such as her dress and body mannerisms," it is imperative that we protect all of these women in order for them to do their jobs safely. We must recognize these lives and make the safety of these individuals of utmost importance in order for them to gain the positive benefits of their work.

I want to reiterate that rather than only acknowledging an abolitionist view of oppression and victimization, which is frequently associated with sex work, it is important to highlight the emotional and physical pleasures, as well as the financial benefits, that sex workers can experience. Whether these women engage in sex work as their lucrative source of income, a way to explore their sexuality and identity, or for self-gratification, let's respect their choices instead of discrediting their work. A pragmatic mindset of sexual liberation, self-empowerment, and bodily autonomy must be recognized.

Ultimately, women are limitless and powerful, and we must accredit the field, ensure safe working conditions, and respect the possibility for sex workers to be independent and proud.