When Heather Penney entered the cockpit of her F-16 fighter jet on Sept. 11, 2001, she knew it was unlikely she would ever survive. Her task? Take down the United Airlines Flight 93 that was unaccounted for after two planes struck the Twin Towers. She would have to do so in an unarmed fighter jet because equipping the plane with missiles would require too much time. Her plane would be the weapon; it was essentially a suicide mission. Penney never completed the job, though, because Flight 93 crashed as brave passengers wrestled control from the hijackers while it flew over Pennsylvania.

The Washington Post first shared Penney's story in 2011, but it's worth revisiting on the anniversary of the attacks. Her interview was the first time she had spoken to the press about that day. "We wouldn't be shooting it down. We'd be ramming the aircraft," she told The Post. "I would essentially be a kamikaze pilot."

Penney, whose nickname is coincidentally Lucky, was a 26-year-old rookie pilot at the Andrews Air Force Base at the time. Not only had she just completed air combat training, but she was also part of the first group of female combat pilots our country has ever had.

"I would essentially be a kamikaze pilot."

On Sept. 11, she was accompanied by Col. Marc Sasseville in the air. The plan was that Sasseville would aim for the cockpit and Penney would ram the tail. Sasseville told The Post he considered the possibility that he could eject from his jet just before making impact with the plane. Penney was hesitant to eject because she was worried about what would happen if her jet didn't hit. "If you eject and your jet soars through without impact . . . " she told The Post, insinuating she would rather die than eject and fail at her mission.

Penney's intrepidity doesn't end there, though. Her father was a former fighter pilot who inspired her to enter the Air Force; he had retired but was flying commercial at the time of her mission — for United Airlines, on the East Coast. Though Penney had "no way of knowing whether [her] father was airborne or not," she still had a mission to do. 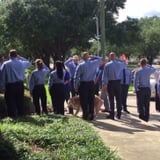 This Sept. 11 Rescue Dog Received a Hero's Salute Before Walking Into Her Final Vet Visit

Hours after takeoff, Penney and Sasseville were informed that the plane, United 93, had crashed. They were tasked with escorting the president and Air Force One through the threatening skies for the rest of the day. "The events of that day really brought to bear how solemn a responsibility and what a privilege it is to serve my nation," she said to ABC News in the video above. "And that there are more important things than me."

Despite her willingness to die for her country, Penney doesn't consider herself a hero. "The real heroes are the passengers on Flight 93 who were willing to sacrifice themselves. I was just an accidental witness to history," she told The Post.

Penney has since retired from the Air Force; she is a mother and works as the director of Lockheed Martin's air superiority systems program. Her list of accomplishments exceeds one instance of heroism: she served two tours in Iraq and remains a National Guard reserve pilot. Even if Penney doesn't perceive herself as a hero, her readiness to sacrifice her life for our country certainly deserves praise.