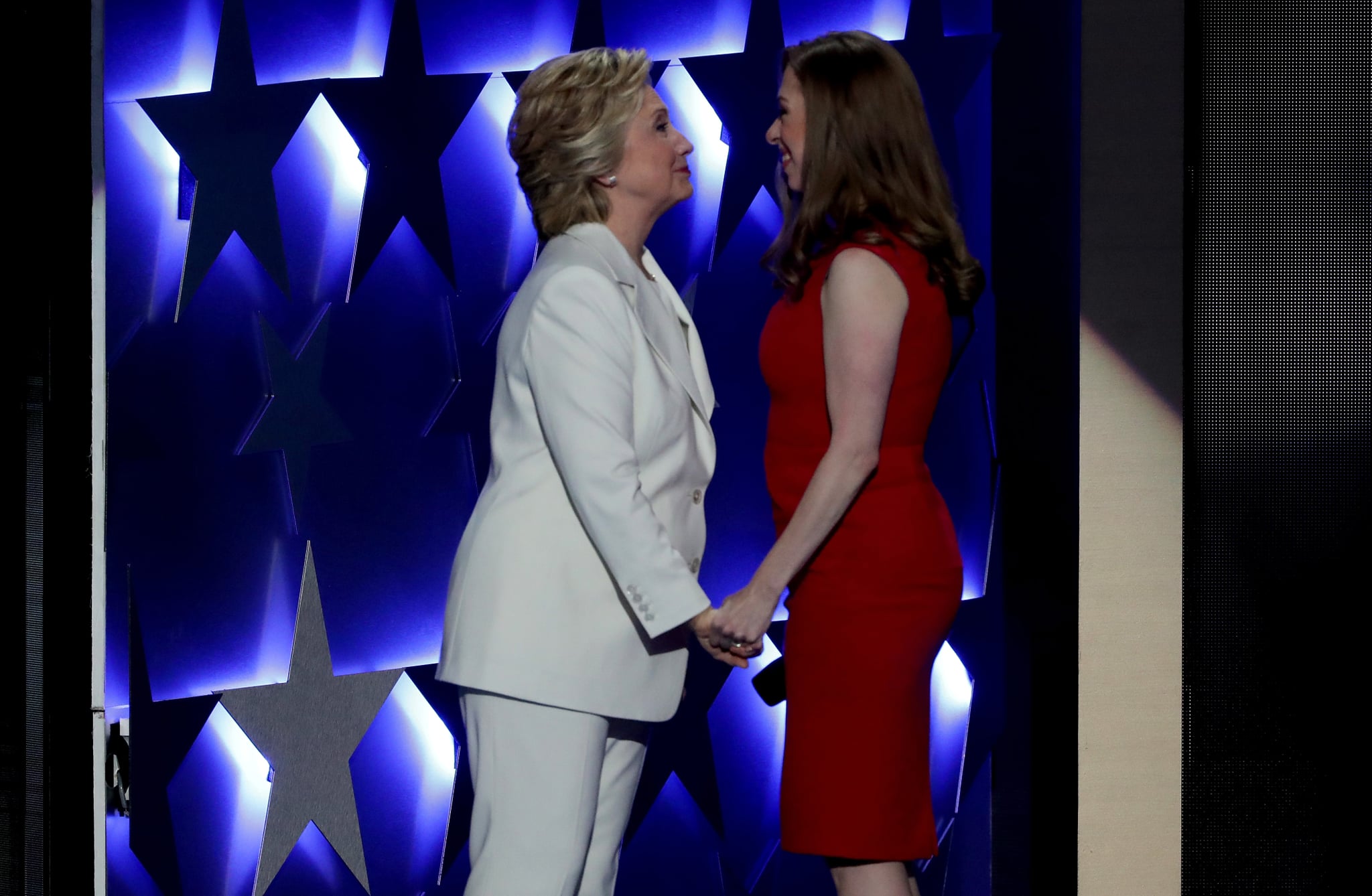 One of the most memorable moments of the DNC's final night wasn't when Hillary Clinton formally accepted the nomination or when Bill Clinton went viral for playing with the infamous balloons. It happened when Chelsea Clinton introduced her mom and the two held each other for a moment before Hillary took the podium.

Here they were, embracing like they had so many times before — except this time it was on one of the biggest nights of Hillary's life. You could see the profoundness in their body language, the way they hugged and tightly held both hands while looking each other in the eyes with a gaze that said, "We did it."

This image of Hillary the accomplished mother is closely tied to Hillary the potential president.

Hillary Clinton hugs her daughter, Chelsea, after being introduced at the #DemConvention https://t.co/DpOhdXu8KW https://t.co/r2em6qIdta

Before the hug, Chelsea depicted Hillary not just as a good mother, but an exceptional one — and a working one. She recalled how when she was younger, Hillary would leave her notes for each day that she was away on the job. Anyone whose mother has left them unexpected letters knows how special this is. Chelsea spoke about Grandma Hillary, who FaceTimes with her grandkids amid the craziness of the campaign.

Hillary's maternal side became a common theme throughout the week. Bill Clinton talked about her lining every drawer in Chelsea's dorm room when she moved away to Stanford for college. And the black mothers who've lost their children to gun violence described Hillary's ability to connect with them on a level that only a mother could understand.

This narrative says she'd make a good president because she's a working mother, not in spite of it.

After decades in the spotlight, many people still don't understand this side of Hillary. You hardly ever think of Hillary the mother before thinking of Hillary the secretary of state or even Hillary the liar. And you certainly don't think of her as Hillary the daughter. But we got a glimpse of that when she reflected on her mother, Dorothy, who was abandoned by her parents at a young age and taught Hillary to be tenacious, outspoken, and kind.

"She made sure I learned the words of our Methodist faith: 'Do all the good you can, for all the people you can, in all the ways you can, as long as ever you can,'" Hillary said on Thursday.

With this in mind, Hillary began work for the children's defense fund and advocated for children with disabilities who were denied education. Later on in her work for education reform, she would judge classrooms by putting them through a "Chelsea test," meaning if they weren't good enough for her own daughter, they weren't good enough for any child in the US. In her speech on Monday, Michelle Obama connected Hillary's role as a mother and her advocacy work to why she would make a great president. "I trust Hillary to lead this country because I've seen her lifelong devotion to our nation's children — not just her own daughter, who she has raised to perfection, but every child who needs a champion," the first lady said.

What a powerful connection — powerful because this narrative says she'd make a good president because she's a working mother, not in spite of it. Powerful because it frames motherhood as an asset in leadership positions rather than a setback to women who want to further their careers. Powerful because it rebuffs people like Donald Trump, who once said pregnancy is an inconvenience for employers. Powerful because during Bill's 1992 campaign, Hillary was criticized for being a working wife and mother, leading her to famously say, "I suppose I could have stayed home and baked cookies and had teas, but what I decided to do was fulfill my profession, which I entered before my husband was in public life."

She's an example to millions of women who don't get enough credit for being wonderful caretakers while working hard.

Pushing her life as a parent into the forefront now doesn't just make Hillary seem more authentic, like it has with President Obama, the first lady, and their girls. It makes her even more of a trailblazer. She's an example to the millions of women across the country who don't get enough credit for being wonderful caretakers while working hard.

Studies have shown the benefits of electing female leaders to political office; they're more effective at sponsoring bills than men, they consider average citizens in the decision-making process more often, and they're more likely to raise overlooked issues like paid maternity leave and equal pay for consideration.

All of these benefits describe the work of Hillary Clinton. She'd probably argue that they describe women outside the political world, too. Women like the mothers who let their daughters stay up late Thursday night to watch her historic moment.

Politics
There's Still Work to Be Done: Stacey Abrams on the Power of Women in the Fight For Progress
by Chanel Vargas 21 hours ago