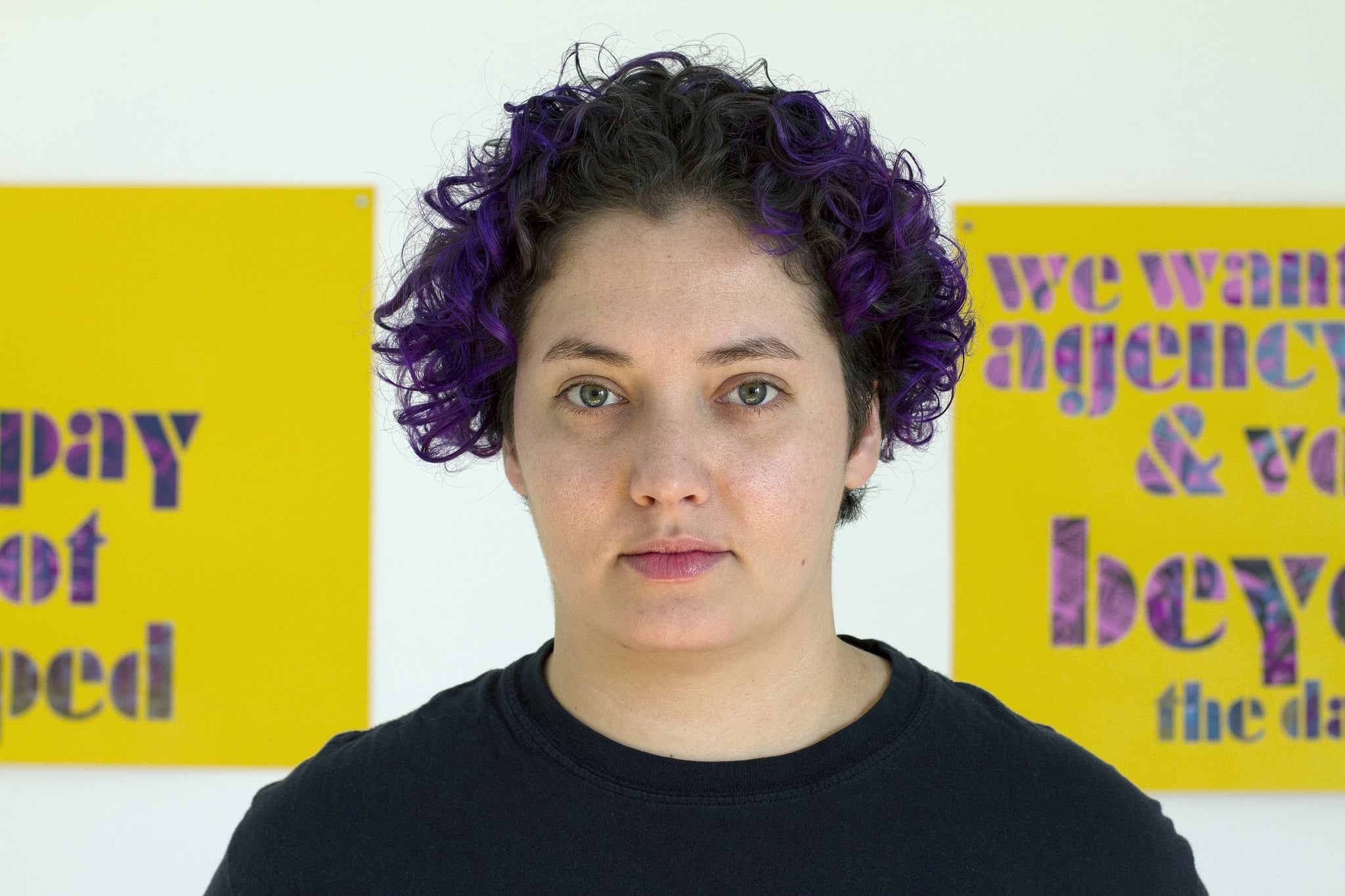 Public restrooms have been a contentious — and often dangerous — place for decades, but even more so in the last year for members of the LGBTQ community. At least 17 states have attempted to pass "bathroom bills" that require people use the restroom of the gender they were assigned at birth, making a normal, everyday part of life an uncomfortable and risky scenario for transgender, gender-nonconforming, and genderqueer individuals. These bills, including the most infamous one currently up for debate (HB2 in North Carolina), are unfounded in their proposed reasoning of "safety," as there has never been a documented case of a transgender person attacking another person in a public restroom. Instead, these bills invite people to police others on their gender identity, which can often turn ugly or violent, ensuring something as basic as going to the bathroom is scary and unsafe for the people falsely set up as predators and more likely to be a target of assault in the first place.

Artist and activist Angela Davis Fegan wants to reclaim these spaces, and she's using bathrooms, bars, and other public arenas as a platform for conversation around queer issues, intersectionality, and feminism with the accessible artwork of letterpress posters.

Fegan's Lavender Menace Project was inspired (in name) by the infamous phrase the National Organization For Women's Betty Friedan used in the 1960s to describe the presence of lesbian women within the feminist movement, assuming they would somehow mar their attempts at equality for all women. In action, the Project is a direct response to the social issue Fegan saw the LGBTQ community focusing on — marriage — and her belief that this focus came at the expense of others in the community who wouldn't benefit from its legalization more than they would from other focused legislation or fundraising. What she wanted from organizations like the HRC was to put the spotlight on the safety and well-being of these individuals; fighting the everyday discrimination that not just gay and lesbian and bisexual people dealt with, but the transgender community, too.

"Being gay is not a class of person," Fegan said. "Most people who are queer have some sort of intersectional identity, and that wasn't being addressed. The push for marriage was largely about granting real estate and tax benefit rights to straight-acting, white, gay men."

She launched the project at the height of the Black Lives Matter movement, deeply affected by the documentation of people being murdered in the street. "I wanted to make a project that addressed the gap between those things," Wells said. "Using the [lavender menace] terminology seemed appropriate because it's a historical moment in time when something like feminism, which is something I agree with and endorse, was critiqued from the left."

Fegan graduated from Columbia College Chicago's Interdisciplinary Paper Arts program where she learned how to use the letterpress she employs for the Lavender Menace Project to create colorful, iridescent poster art. Her works include jarring and passionate phrases that challenge readers in a way most wall art in bathrooms and bars do not.

"Printing really is like a boys club — and especially letterpress printing," Fegan said, "So being able to subvert or steal this skill that's usually traded amongst white men and print things that you would never see enhanced in type — like 'p*ssymonster' — was awesome. It was a very satisfying thing, because the contemporary use for letterpress at the time was mainly for wedding invitations." 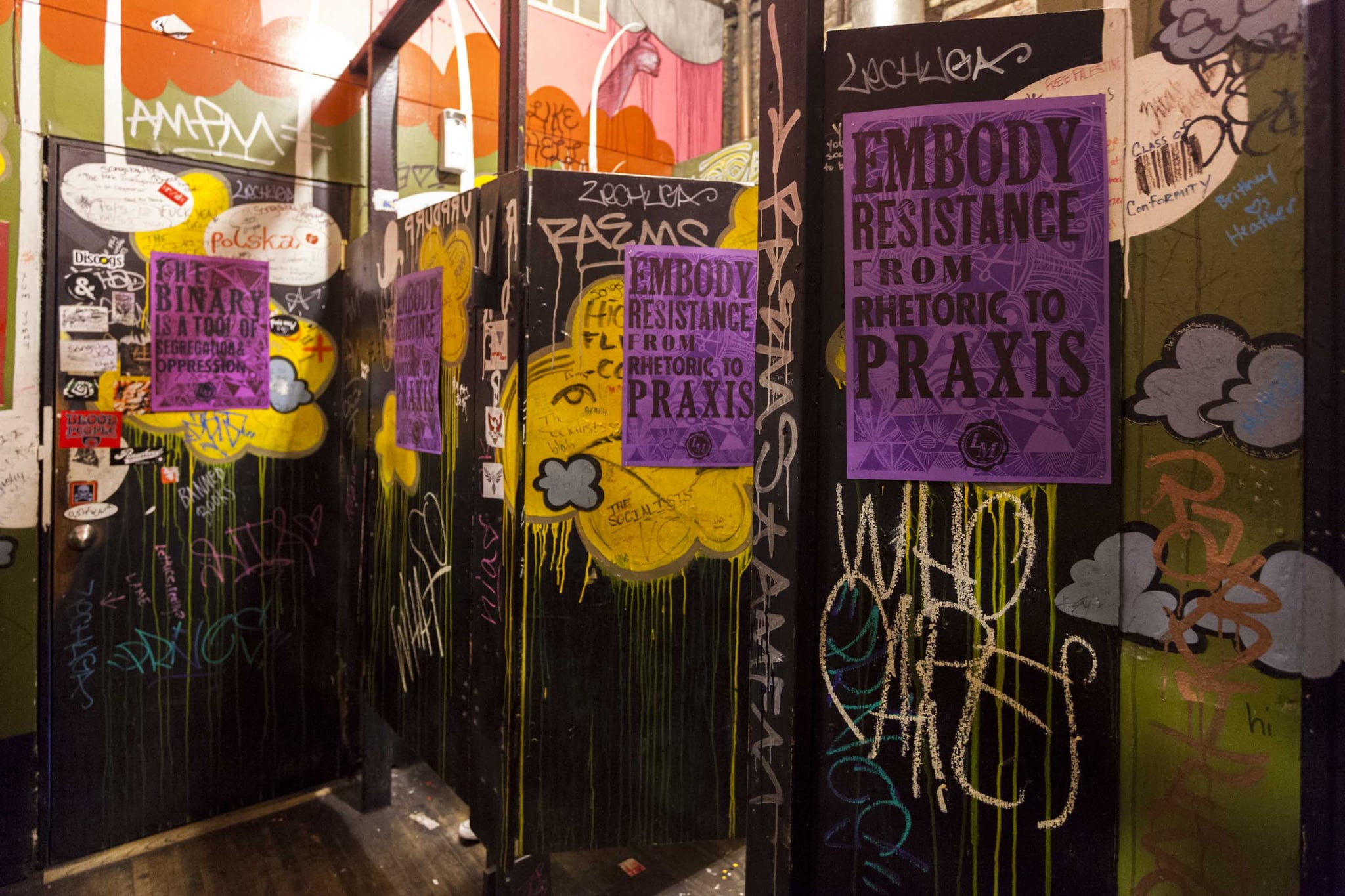 Fegan received a grant from The Propeller Fund for her project, which has helped her finance the printing of these intricate and powerful pieces, which inevitably get stolen by admirers or scribbled on by restroom users. ("The things that people write on my posters vary from them just them tagging their own names to writing things about boys to telling me to go f*ck myself," Fegan said.) So far, she's hosted three "bar interruptions" at mainstream "heterosexual" venues that have sporadic queer dance parties or shows, bringing in a regular LGBTQ contingent.

"I kind of picked which venues I wanted and each time, in that venue, I either write to the scene of that existent dance party that I'm cosigning or to the space itself," Fegan said. "With the Empty Bottle, an iconic music venue and it being their 25th anniversary, I kind of just wrote about the bathroom as an institution and music as a liberation tactic. That felt right for the venue."

Fegan's work inside the Empty Bottle bathroom read "Signal Jamming the Echo Chamber of These Narratives" with sketches of scissors on the pink poster; "When We Unite, You Call Us Separatists" cries another; "The Binary Is a Tool For Segregation and Oppression" and "We Are Coming For Your Real Estate and the Brides Who Came With It" stand out in a font you'd expect to see on a greeting card. These juxtapositions of typeface and watercolor hues most often associated with feminine expressions of celebration are inspirational pieces of art that can also be used as protest signs — and they were, at last year's Chicago Dyke March. But Fegan isn't interested in selling her work — nor is she looking to turn it into wearables, as seems to be a trend with feminist and queer slogans as of late (think "The Future Is Female").

"To me, the poster is desirable because it's ephemeral," Fegan said. "It's relatively inexpensive and it can transform from wall art to a history of posters being in bathrooms about shows, music — live music being one of the largest users of letterpress besides the newspaper or the printing of National Geographic — and then also be protest objects."

The Lavender Menace's latest takeover was launched at Salonathon, a regular experimental art showcase at Beauty Bar in Chicago's Wicker Park, as of April 24. 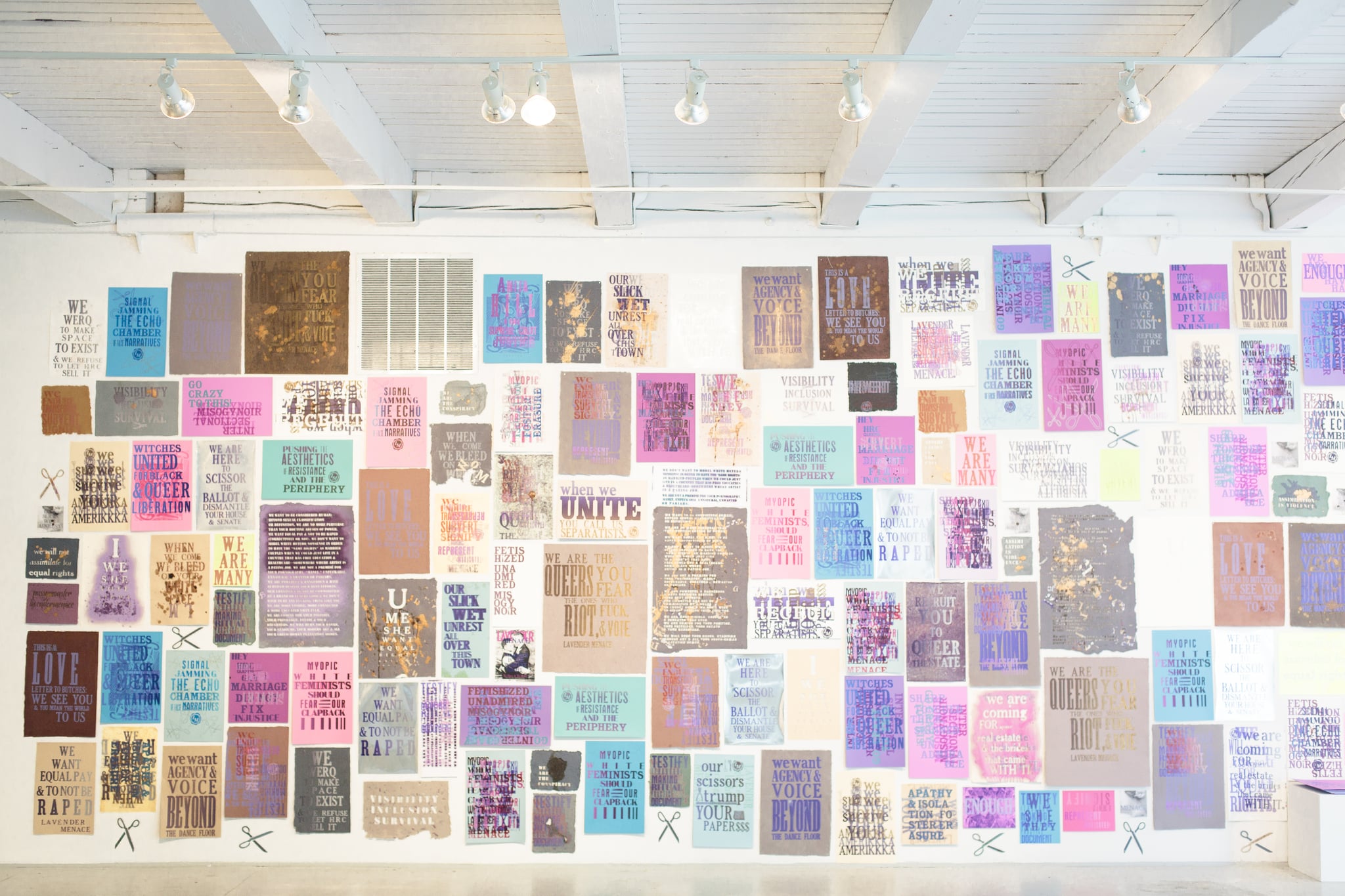 "The slogans that I've written already for the Salonathon are really about putting in work and isolation," Fegan said. "But those are things that I think themes that I've seen addressed in pieces performed at Salonathon over time, so I think that that being a primarily queer performance art audience — they're going to be very receptive to those slogans. So I already know who is going to be in the spaces I'm in — it's actually easier for me to write on theme. Otherwise, it has to be based on an emotional reaction to something that somebody says publicly or says to me personally."

While the venues Fegan has chosen to display her work in are not queer-specific, she isn't looking to bring the project to spaces that are not catering to the community in any way. That isn't the conversation she's looking to have or the people she's hoping to enliven.

"I made these posters for people to feel like there was a voice that agreed with them that they don't see represented otherwise, and for people to steal and take them — since they're not commodified objects, they're not for sale, then I don't really see the point of putting them in a space where no one wants them and won't take them," Fegan said.

Still, Fegan said she will sell them to certain people — "I sell them to people who are very strange about acquisition, and if they're wealthy and white. But generally no, because the goal is not to aestheticize someone's oppression and then sell it back to them to profit. If people want them, I give them away." — and she is also readying a book about the project to be released this Summer.

"The culmination of this grant is a publication basically summarizing the methods I use, what the reactions were like, and some contextualizing essays from some writers that I know just so that anybody who wants to stage something like this can employ methods or learn from my experience so I don't have to keep doing it forever," she said. "If somebody knocks me off, that would be better. I'd be flattered to have someone steal the idea and run with it because I can't — it's not sustainable for me to do forever."

But with galleries, museums and individual fans requesting her work for their collections, the Lavender Menace will live on and continue to give viewers something to think about long after they've gotten the message.

The Lavender Menace Project is at at Beauty Bar in Chicago now. Work from the project is also on display at The Praxis Center at Kalamazoo College in Kalamazoo, MI.