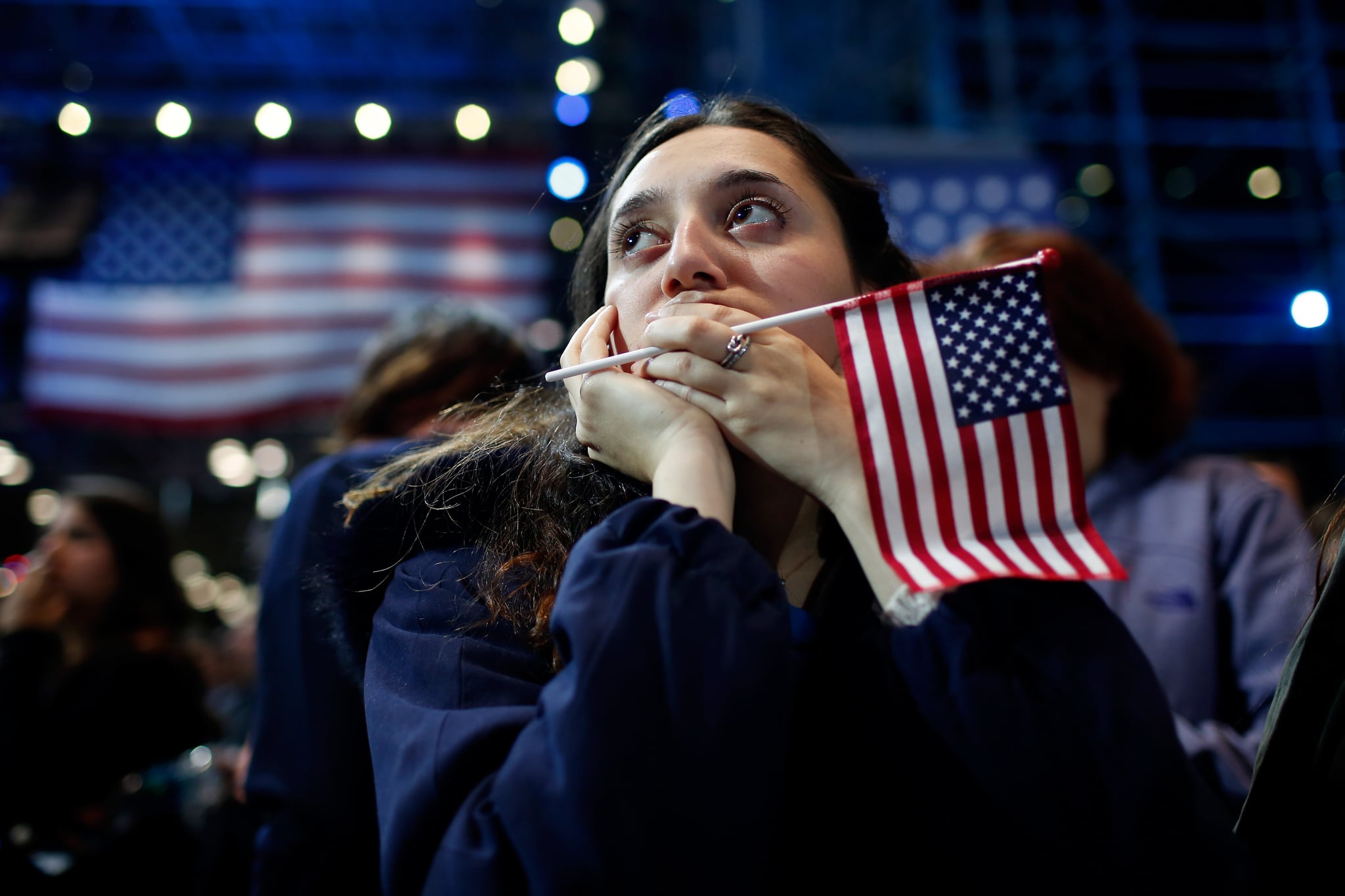 At a Christmas party in SoHo this past December, a friend of mine — mid-20s, Ivy League educated, ardent New Yorker — explained her voting habits thusly: "Well, I voted for [Donald] Trump because of what it would look like to men if I had to say I didn't."

The reality? On Tuesday, Nov. 8, she never cast her ballot. She announced this to me as if her decision was rational, dismissing my incredulousness with a wave of her hands.

But when I saw her again only a couple weeks later, she was horrified. Shocked by the policies of the Trump administration, she also felt complicit in their very existence.

And she was. Post-election polls reveal that nonvoters had a major impact on the election. FiveThirtyEight notes that "had the nonvoters cast a ballot in accordance with their party identification, Clinton's advantage over Trump nationally would have expanded by about 2 to 3 percentage points" — enough to win the Electoral College. Given the Democratic party's support of women's rights (and the Republican candidate's antipathy towards women), women who didn't like either candidate could have influenced the election by voting for their own self-interest. "Democrats who stayed home handed the election to Trump," Forbes reported.

Much has been written about the women who voted for Trump, but what about the women who didn't vote at all? According to Hillary Clinton, many of them are desperate for forgiveness. In her first in-depth magazine profile post-defeat, Clinton recounted how women regularly approach her, looking for salvation: "'I'm so sorry I didn't vote. I didn't think you needed me.'" Said Clinton: "I had people literally seeking absolution."

But they're not the only ones expressing remorse: their would-be candidate is as well. Clinton was the first presidential candidate ever to seek forgiveness from her constituents in her concession speech. "This is not the outcome we wanted or we worked so hard for," she said. "And I'm sorry that we did not win this election."

No male politician has ever felt obliged to apologize for losing, and the idea of Trump blaming himself if he had ended up in the same scenario is laughable. For women who didn't vote because they felt they didn't "need" to, Trump's victory was a harsh reminder of the deeply ingrained sexism in this country. Many nonvoters considered Clinton's presidency a foregone conclusion. But rather than electing a woman to be president in November, we elected a man who actively disrespects women instead.

Says Emily's List spokeswoman Alexandra De Luca, "This election was a stark reminder that women and men are still treated very differently in this country."

The largest resource for women in American politics, Emily's List supports pro-choice Democratic women running for office. Says De Luca, "There's no 'right' way to react to the election of a man who bragged about sexually assaulting women just because he was famous. I know I'm not the only one who spent a few days with a box of tissues."

Trump's comments were triggering for many women, including many who say they suffer from PTSD. Dr. Hannah Roberts, a California-based clinical psychologist, reports that nearly all of her female clients suffered from post-election distress — stress that is heightened for those who didn't vote: "Our country explicitly devalued an identity that includes just over half of us. That leaves us feeling without a sense of control and can easily touch on feelings of trauma."

While Trump's campaign rhetoric reinforced limiting gender roles, the dismissive treatment of Clinton supporters compounded feelings of powerlessness among women who didn't vote — or who didn't feel comfortable sharing their political opinions in more informal ways or intimate settings, either.

I was getting drinks with another friend (again: educated, successful, seemingly sane) the night before the Women's March when she confided in me that she hadn't voted in November. She told me how her fiancé, who works in finance, told her to vote for Trump, and — though she resisted his advice — she couldn't bring herself to vote for either candidate. She'd heard anti-Clinton rhetoric every evening for the past year; feeling unqualified to weigh in, she'd always remained silent. Now, she was marching for Planned Parenthood, excitedly discussing the p*ssy hat she'd don the next day.

"Change rarely accelerates until we make demands — including unpopular, forward-looking demands — in public."

"Many of the reports of how women experienced this election were similar," says Dr. Roberts. "Needing to stroke male egos and reassure them that women were not voting for Hillary because of her gender . . . it left women feeling very silenced and isolated."

Hence the popularity of Pantsuit Nation: millions of women insulated themselves among like-minded peers, quarantining their beliefs within a private forum. Would men ever feel so compelled to hide their opinions — let alone apologize for them? And what impact did this sequestering of political opinion play when it came to the polls?

Clinton referenced Pantsuit Nation via the "private Facebook sites" in her concession speech, stating: "I want everybody coming out from behind that and make sure your voices are heard going forward."

It's our turn to step up to the political stage — and women have been turning out in record numbers to run for office, a phenomenon De Luca has witnessed firsthand: "Emily's List has heard from over 14,000 women since Election Day looking to run for office. That is unprecedented!"

"Change rarely accelerates until we make demands — including unpopular, forward-looking demands — in public," says Erin Matson, cofounder of the reproductive justice group Reproaction. "Get active. Pay attention to local politics and vote every chance you get. Resist the right-wing — participate in protest at the local level."

It's certain that some women didn't vote because they considered a Trump victory to be unbelievable, but maybe Hunter S. Thompson said it best: "When the going gets weird, the weird turn pro." I'll amend that to say, if the future is going to be female, the females need to turn pro: run for office, start direct action groups, vote in local elections, fundraise for reproductive rights — anything possible to make our voices heard.

For women suffering from the guilt of not voting, Dr. Roberts's advice is to "reconnect with your core values and remind yourself of those foundational beliefs that define who you are as a person," ensuring the same remorse won't happen again.

The second step? "Acknowledging what has happened and then deciding what to do about it," says Dr. Roberts. "It is important to identify what step you are taking to move forward, however big or small that may be. It returns a sense of control to an individual and helps them move into a place of empowerment and resilience."

Nothing is more indicative of extreme privilege than a blasé attitude about your own rights as an individual.

So, what should Hillary say to the women coming to her for forgiveness? Dr. Roberts says what she certainly shouldn't do is apologize further. "Demand for Clinton to continue apologizing, or the expectation of her self-flagellation, is indicative of the ongoing misogyny today," says Dr. Roberts. Our instinct to appease encourages complacency among female citizens.

"Our women are no shrinking violets," Matson says of Reproaction. Yet, even in this climate, I still find myself among women unwilling to vocally support the feminist agenda. I've witnessed how educated women who should feel unabashed in their support of gender equality (and aware of the necessity of reproductive rights) are reticent to share their beliefs, fearing they will appear unattractive to men. There is no excuse for this equivocating any longer. Women's rights are human rights.

Nothing is more indicative of extreme privilege than a blasé attitude about your own rights as an individual. Many women I know who were previously apolitical certainly thought they were insulated from terrible injustice — an attitude that changed the night of the election. A man who considers women's bodies his to claim, obvious in his boasts about sexual violence and his attempts to deny reproductive rights, is now our president. It was a wake-up call to many women that the only kind of feminism is intersectional feminism.

While much has been written about the white women who voted for Trump, there are plenty of white women who didn't show up at all — and some of them are now starting to get "woke." Unfortunately, in many ways, it's too little, too late.

When a friend posted anti-Trump videos from the Women's March, her boyfriend expressed surprise that she would do so. "I didn't think you were like that," he texted her moments after she posted the "controversial" Instagram.

Well, maybe she is. And maybe if more women were vocal about their beliefs, the stigma and shame would dissolve.

"Everywhere I look, I see examples of women fighting back: starting new organizations, announcing an intention to run for office, or even getting publicly political for the first time with bumper stickers and Facebook posts. It all counts and I believe that we will win," says Matson. "Throughout history, feminists on the fringes who are willing to be despised and ridiculed have played an important role in advancing equality and justice."

It's time to speak up and to stop apologizing for being women, for being ourselves, for holding political beliefs in support of our own civil rights and the rights of our fellow women. It's also time to stop looking for guidance from authority figures; the women apologizing to Hillary should refocus their energy on the future instead of the past. Haven't we learned in the recent election it is best to take matters into our own hands? We can't be complacent and expect everything to turn out OK. But perhaps it takes a huge historical event to elicit change.

"On Nov. 9, I woke up, looked at my preschool-age daughter, and wept," says Matson. "But you know what? Now my daughter talks incessantly about politics and she's gone to phone banks and is canvassing this weekend."

The future is female, indeed.