As COVID-19 cases and deaths surge exponentially, unemployment continues to soar, and millions of Americans are left without health insurance and savings, Congress and the White House still have yet to offer meaningful economic relief. And it's clear working mothers — and, disproportionately, working mothers of color — are shouldering the brunt of politicians' refusal to act. 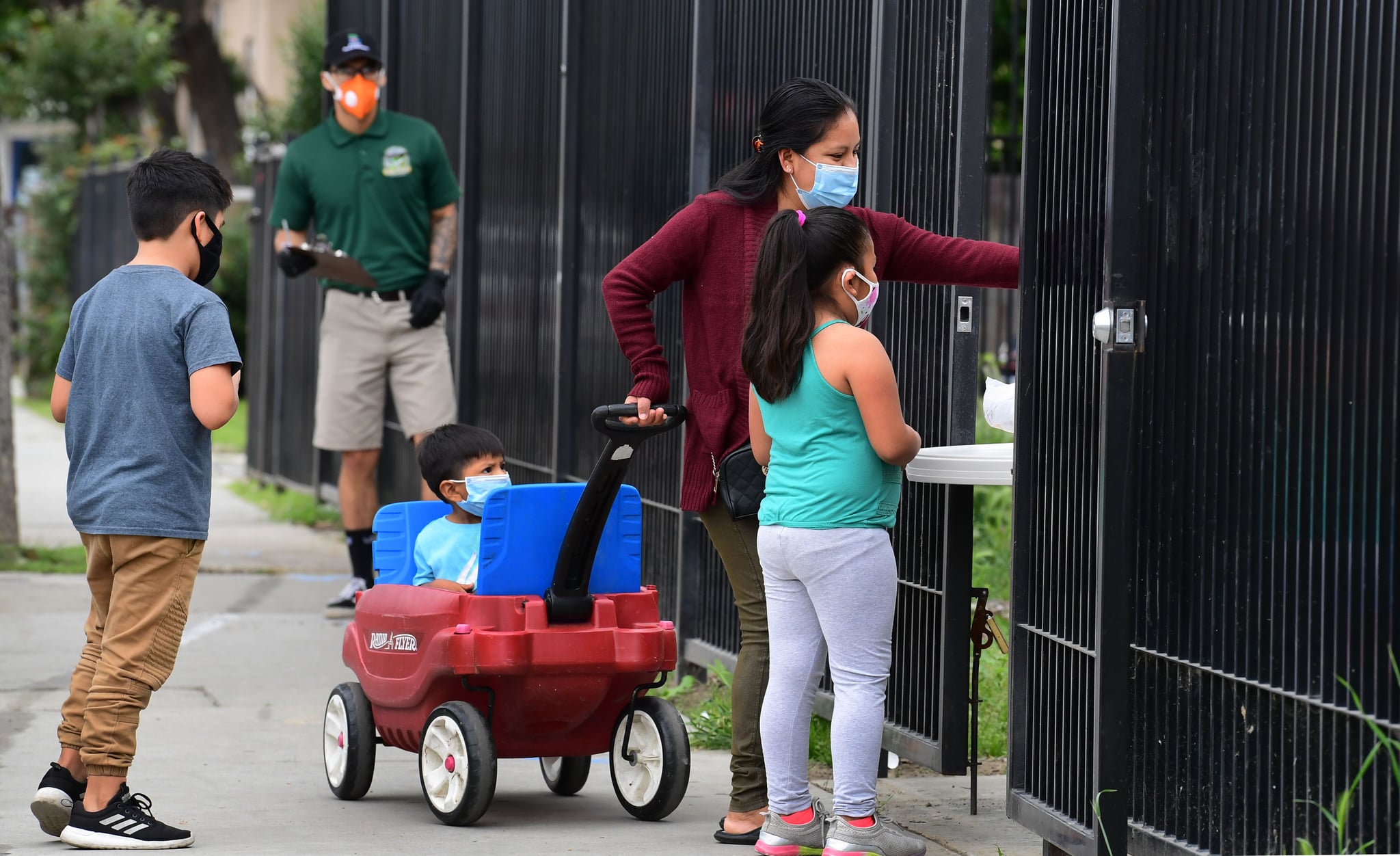 A woman with her children picks up groceries at a food bank in El Monte, CA, in April.

In November, a New York Times report found child-care needs created by the pandemic and recession could push women — but not their male partners or coparents — out of the workforce for years to come. The report echoes similar prior analysis that the pandemic could set women's economic gains back an entire generation, by forcing them to give up work to fulfill mounting domestic obligations.

You may have heard the saying that where other countries have social safety nets, America has women. And the numbers back that up. Today, a third of working American women ages 25 to 44 who are unemployed specifically cited child-care demands as a reason. In addition to their full-time jobs, working mothers have been forced to step in as full-time child-care workers and teachers amid school closures and social-distancing guidelines. For many, and certainly for working mothers who are unable to work remotely, this situation is untenable without child care and other essential supports. And without COVID relief, many working mothers and families have been left to fend for themselves.

It's worth noting even prior to the pandemic, some research estimated the gender wage gap stands at roughly 49 cents on the dollar — significantly worse than the commonly touted "80 cents on the dollar" statistic. This statistic includes all men and all women —not just all men and all women who are employed full-time — and is certainly skewed because women are significantly more likely than their male partners to give up their jobs and professional ambitions to support family and domestic needs.

Women, and especially women of color, have long been owed and denied support and economic relief from the government.

The pandemic has only exacerbated this divide. Notably, the Times interviewed one woman, a mental health counselor whose husband looked after their two children for two days before telling her there was "'absolutely no way'" he could continue. As a result, she cut her weekly working hours from 32 to five. She's one of many working mothers squeezed out of the workforce by a lethal combination of unwilling male partners, inequitable domestic situations, and, ultimately, a government that stubbornly refuses to help women and families, but somehow had the time to force the confirmation of a vehemently anti-women, antiabortion Supreme Court Justice in October.

It's also worth noting that where previous recessions have hit male-dominated industries like manufacturing hardest, the current recession disproportionately impacts the service and child-care industries, which are predominantly comprised of women and women of color. From the start of the pandemic to its current second wave, women of color have faced the highest rates of unemployment, but are also disproportionately essential workers, often denied fair wages and benefits, and all while being expected to take on the brunt of child-care and home-learning needs.

Even prior to the pandemic, significant economic barriers have always fallen most heavily on women and women of color, who face the highest rates of poverty and lack of insurance coverage. From the cost and tax on menstrual hygiene products, to the gender wage gap, to lack of adequate family leave or universal child care, women and working mothers have always been economically penalized in the US. This is especially true when it comes to accessing reproductive health care, due to state and federal laws that prohibit coverage of abortion and reproductive care but not cisgender men's health services. More recently, the costs of reaching care have only increased, as numerous states at different points used the pandemic to shut down clinics.

A public health crisis, recession, and government negligence have only compounded and worsened the double standards and economic constraints that have always punished and squeezed out working mothers but often not working fathers. The pandemic and the sexist, racist toll of the government's failure to provide relief or universal income underscore that women, and especially women of color, have long been owed and denied support and economic relief from the government.

Today, the stakes have never been higher, as a deadly pandemic and economic crisis threaten to permanently challenge women's access to the workforce, professional ambitions, and economic security. The government's refusal to act places all of us at risk, but promises to have disparate, lasting ramifications for working mothers unless Congress issues a new stimulus, pays families to stay home and stop the spread of the virus, and ensures working mothers can afford safe, quality child care.

Rita Moreno
Rita Moreno Reflects on Her Botched Abortion in Wake of Roe v. Wade Being Overturned
by Sabienna Bowman 3 days ago