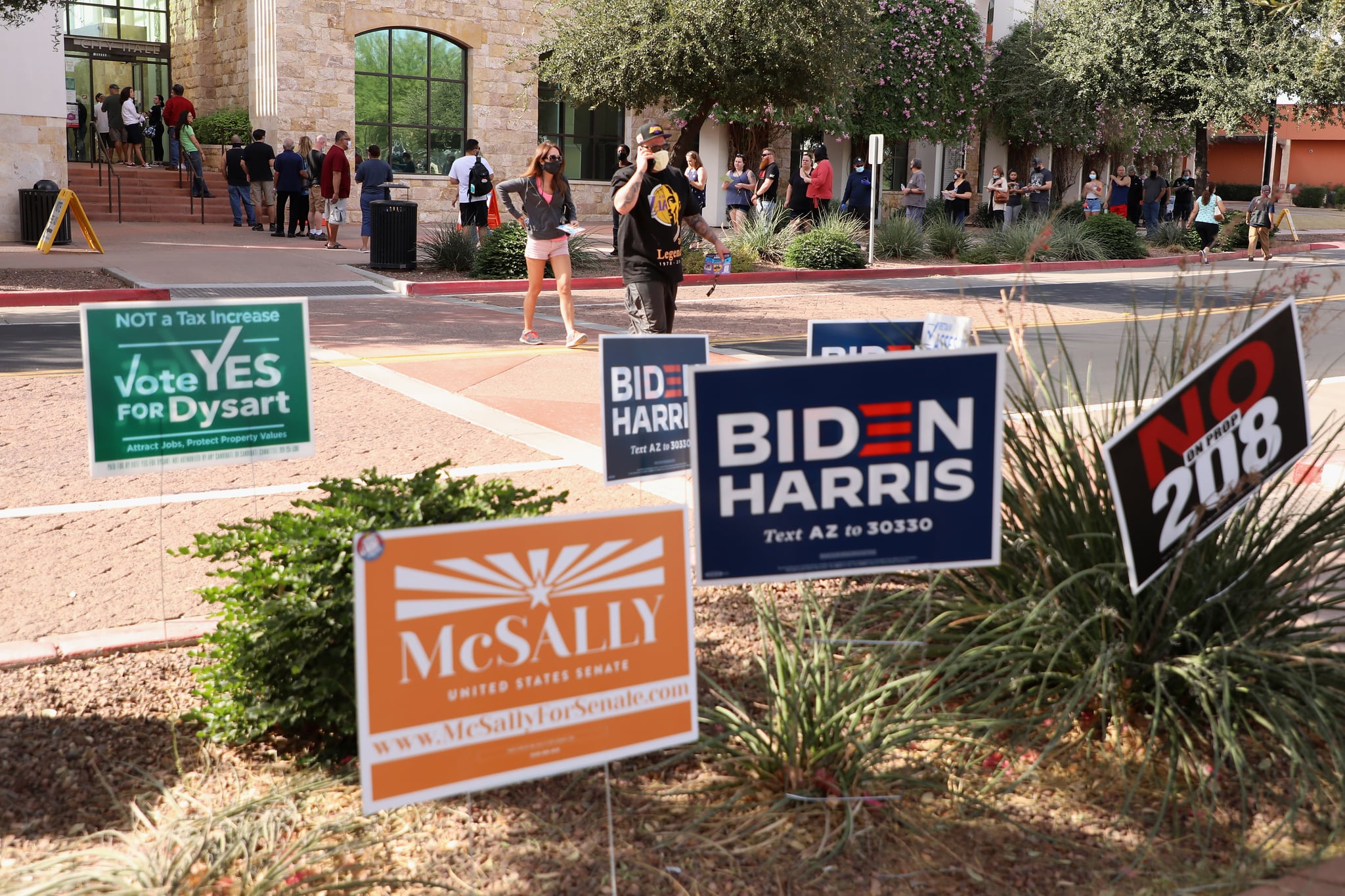 I woke up this morning to news that's made me prouder of my state than I've been for a while: Arizona elected a Democratic senator for the second election in a row, and, if current numbers hold, the state also unexpectedly flipped blue for former Vice President Joe Biden. It's the culmination of an incredibly impressive effort, from the bottom up, to move the state in a direction that more accurately reflects its racially, economically, and ideologically diverse electorate.

The thing you have to understand about Arizona is that, even though its public image is marred with far-right conservatives like Joe Arpaio and major scandals like SB 1070 (the state's "show me your papers" law, which struck fear in the hearts of immigrants until just a few years ago), it prides itself on being "independent" in many ways. Appealing to that independent mindset has been key to the Democrats' strategy for the past few years, and from my view on the ground, it's been working.

Although Arizona has traditionally looked very red from the outside, liberal organizers and voters have been waging a fierce, if often overlooked, battle inside the state for years.

Watching the ads for Senate candidate (and presumed victor) Mark Kelly, for instance, I've noticed a strong focus on values of independence, working across the aisle, and issues that affect all Arizonans. Kelly has largely avoided tying himself to the broader Democratic party or policy platform; it's similar to the strategy that won Kyrsten Sinema the other Arizona Senate seat in 2018. In contrast, his opponent Senator Martha McSally has run a heavily Republican campaign, having aligned herself closely with President Donald Trump in the past two years and throughout this race. In a year when Trump and McSally are both unusually unpopular for Republicans in Arizona, that strategy backfired.

Although Arizona has traditionally looked very red from the outside, liberal organizers and voters have been waging a fierce, if often overlooked, battle inside the state for years; it's been more purple than outsiders might realize. The Tucson metropolitan area in the south of the state, for instance, has traditionally been a liberal stronghold, consistently sending Democrats to Congress and breaking for the Democratic candidates in statewide and national elections. The metropolitan Phoenix area in Maricopa County is one of the fastest-growing in the country, which typically corresponds with a leftward political shift. And, as the New York Times pointed out as recently as this September, a surge of urban voters and increasing diversity in the state have combined at precisely the right time to narrowly flip the state blue, at least for now.

There's also the 2020 factor of it all. "Minus Covid, this particularly close race here doesn't happen this year," Republican strategist Chuck Coughlin told NBC News in late October. Trump's botched handling of the pandemic has played particularly badly here in Arizona, where we've had more than 250,000 confirmed cases of COVID-19 and more than 6,000 deaths, according to the Arizona Department of Health Services. As in other states, the pandemic has disproportionately affected BIPOC and the elderly. Older voters and Latinx voters are both large Arizona voter blocs that any candidate hoping to win here needs on their side.

Beyond the polls, there's plenty of anecdotal evidence of Arizona's deep divide and slow move towards swing-state status. In my own district in the metro Phoenix area, I've seen more evenly split support than ever before. When I go for a walk or a run through my neighborhood, every day I pass by a pair of houses, across the street from each other, that embody this shift. One yard is filled with seven different Trump or GOP-affiliated flags, plus a few election signs; the other with nearly a dozen signs for Biden, Kelly, and other Democratic causes and candidates down the ballot. There's a big divide here, but also a lot of passion — I think Arizona is tired of being written off as Texas-lite and has been spoiling for the spotlight for a while now.

As a native Arizonan, I do want to add one caveat here: I don't believe this hard-blue flip will last in the long term. Arizona's unusually blue showing this year has been the result of a perfect storm of factors: the poor pandemic response hitting our state especially hard, a historically unpopular president and senator who tied their campaigns to each other, a huge amount of targeted advertising and campaigning, and the state's overall demographic shift. That being said, I also don't believe that Arizona will be going back to deep red country anytime soon. I suspect we're well on our way to becoming a swing or "purple" state that comes down to the wire like this over and over again.