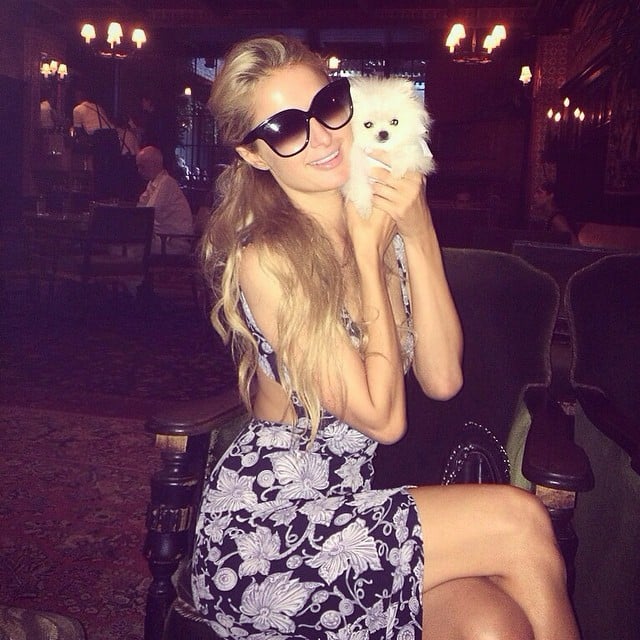 Paris Hilton's new puppy is already a pretty big deal. As news about Paris's expanding brood spread across the Internet on Saturday, the socialite became a trending topic on Facebook. The day before, Paris fueled interest in her new dog by sharing cute pictures of him on Instagram. In one snap, the little guy is sitting next to a teddy bear that appears to be at least double his size. According to TMZ, the pup weighs just 11.6 ounces and is about 2.5 inches tall. And while he might be tiny (his breeder dubbed him the world's smallest Pomeranian), he definitely did not come cheap — Paris reportedly paid $13,000 for the furry fella. As for his name, Paris chose Mr. Amazing, but she wants everyone to know she's open to ideas. "Any name suggestions for my new lil baby?" she asked via Twitter on Thursday. Keep reading to see Paris's sweet moments with Mr. Amazing, including an adorable video, and then explore the two-story doghouse he might call home.

Any name suggestions for my new lil baby? http://t.co/K3UFibLuD1 via @usatodaylife

Kamala Harris
Doug Emhoff and Kamala Harris Celebrate Ella's Graduation: "We Are Such Proud Parents"
by Karenna Meredith 1 day ago

Kobe Bryant
Vanessa Bryant Honors Kobe Ahead of His Hall of Fame Induction: "Love You Always"
by Monica Sisavat 2 days ago