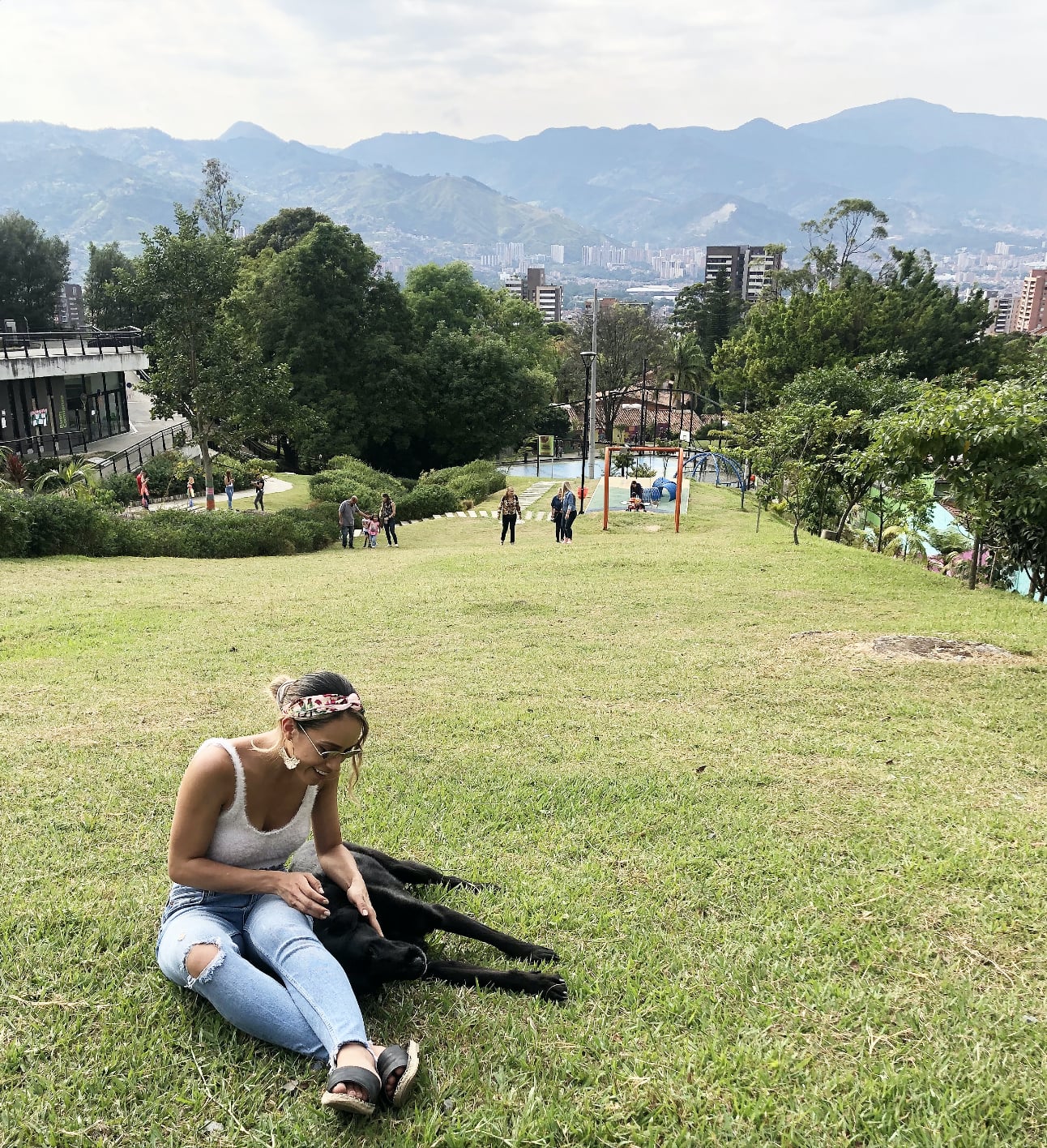 When I agreed to adopt a burly black lab expected to live only a week or a month longer, I imagined that he would live out the rest of his days in a two-story colonial house in Connecticut, receiving all the love he would need to help him gently over the rainbow bridge. What I couldn't have anticipated, however, was that his determination would have him far outlive his life expectancy and that his final tail wags would be had in a South American city bursting with love for him.

Sam spent one-and-a-half increasingly healthy years living that imagined Connecticut life after being adopted – thriving in a house full of love and slowly shedding every grave prognosis stamped on him before finding his way to Medellín, Colombia, alongside one very grateful adoptive mama (hi, that's me!). I knew that saying goodbye was inevitable given that his worsening kidney damage was irreversible, but the dreaded change to more bad days than good seemed to be farther away with every new month that passed. But two blissful years post adoption, the change started to creep in.

I knew that saying goodbye was inevitable, but the dreaded change to more bad days than good seemed to be farther away with every month that passed.

Sam had always been a vigorous eater with eyes that widened at the first whiff of food. Because of this, feelings of panic whirled within me the day he refused his kibble. We had just moved to a new neighborhood and I was not familiar with any of the vets on my area, but I knew that he needed his health reevaluated sooner rather than later. I decided to contact a small veterinary clinic around the corner from my home, unsure if they would be able to see us in person due to the strict COVID-19 regulations that had recently been put in place. To our surprise, they could.

After blood panels and urine samples confirmed that Sam's kidney failure had advanced significantly, the vet recommended that he begin daily intravenous fluids to flush out the toxins in his body. Unfazed by the discomfort of having an IV attached to his arm each day, Sam's favorite place outside of home quickly became the vet's office. He would pull me (literally) to the clinic's front door each day in anticipation of coveted treats and burrow his head into the vet's chest during and after his treatments. Blood tests became routine. Drip bags hooked to his IV became part of his daily norm as we attempted to give his kidneys a fresh start. None of these interventions seemed to be making impactful change, however, as his increasing blood levels confirmed an alarming reality: Sam was dying, this time for real. 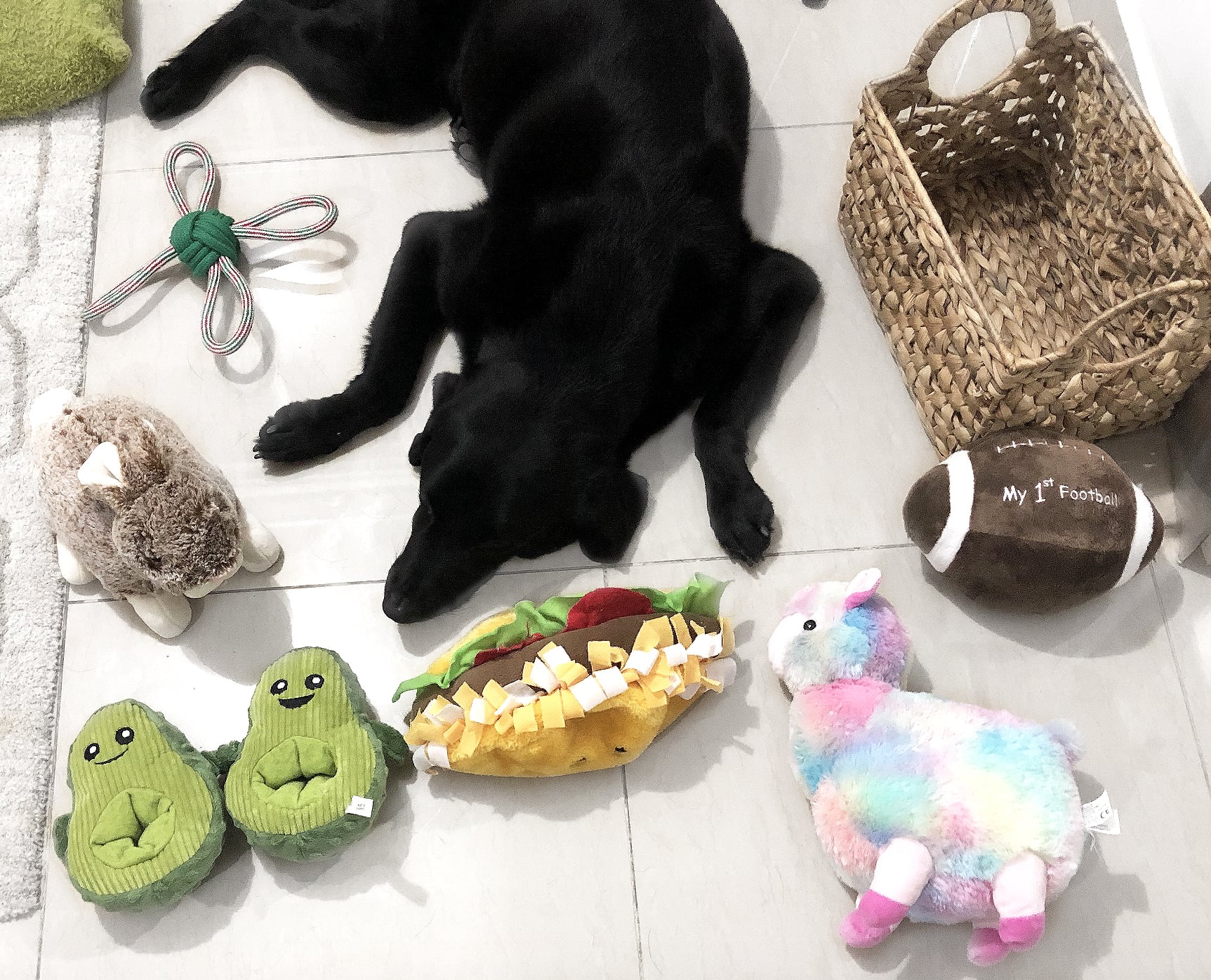 In the last few months of his life, Sam's health changed drastically. He quickly went from playing fetch every morning in the park to protesting walking any further than a few steps away from our home. He stopped eating all of the foods he loved: first kibble, then each of his favorite snacks, one by one. His lungs started to fill with fluid, which muffled his bark as if he were drowning from the inside. We tried everything from IVs and traditional medicines to talking to veterinary specialists, using homeopathic tinctures, and participating in distance reiki sessions to get him to feel better again, all to no avail. Sam continued to receive treatment for his worsening condition, and he did it all with the courage of a warrior and the gentleness of a giant, knowing that a mountain of cuddles were waiting for him on the other side.

A couple of months into treatment, it became more apparent that Sam was tired. He could no longer get comfortable as he paced from once corner of the room to the other, coughed to the point of hacking, and became increasingly lethargic. I asked the vet what the final symptoms of his kidney failure would be, and the answer I received was bleak and grim to say the least. I was advised it would be best for Sam and me if I did it sooner rather than later.

So I made the difficult decision to finally say goodbye.

The day before his appointment, we had a mini photo shoot at our favorite park. He walked the whole way without protest, stopping only to sniff every leaf, flower, and enticing smell that traveled on Medellín's shifting winds. He didn't have the strength to get up on the bench at the park like he used to, but it didn't matter. I knelt down next to him and took in every last fold of his skin as our photographer friend snapped away. Sam sat peacefully for every hug, and in between receiving my giant, enveloping squeezes, he happily took in the sights, smells, and sounds of his final home. 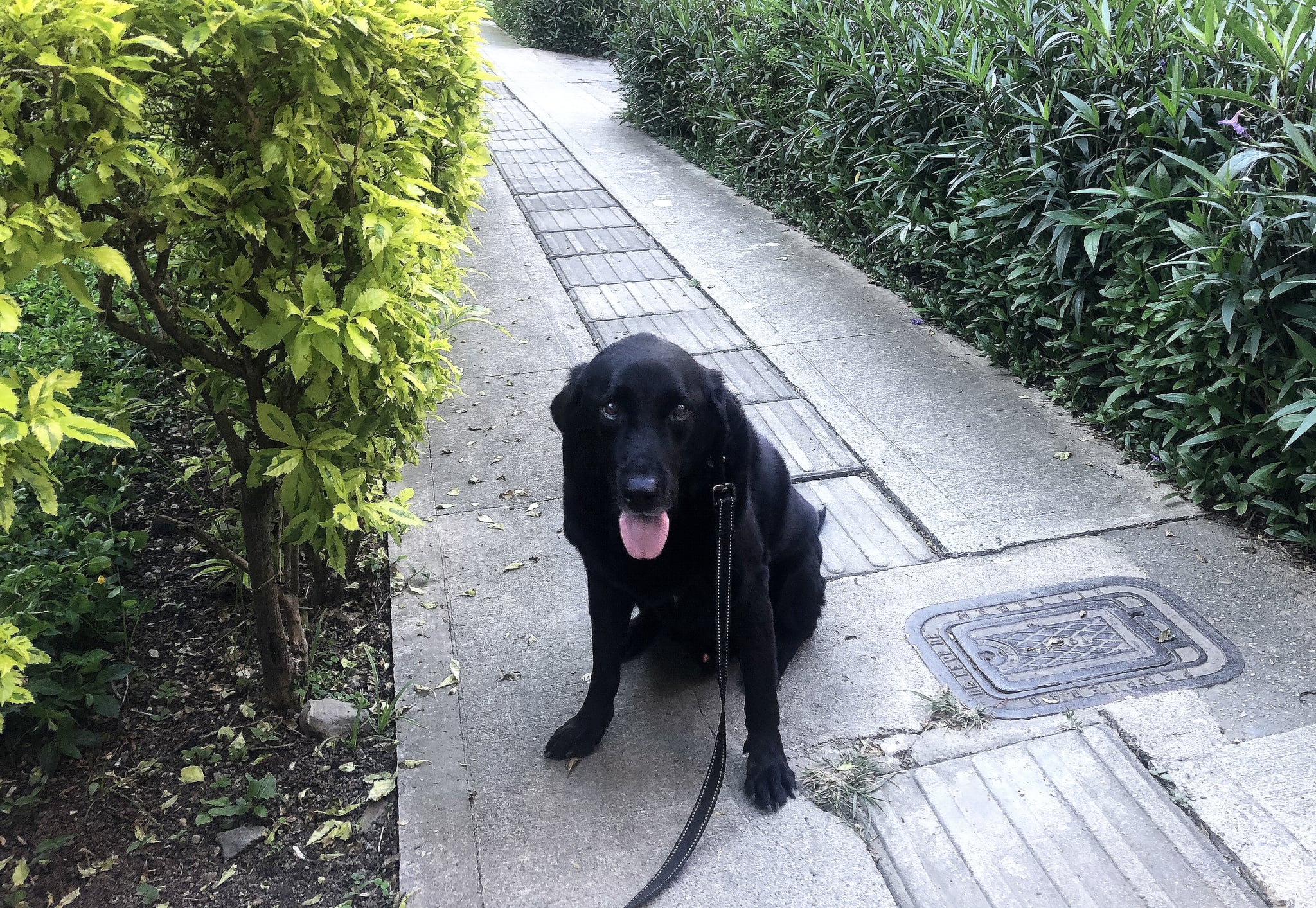 That night, I decided to dedicate three songs to Sam ("You & Me" by Dave Matthew's Band, "I Was Born to Love You" by Queen, and "Fix You" by Coldplay) and played each one for him as he drifted off into one of his last snoozes. Unsure of how to explain to him just how much I loved him, I wrote a letter to read to him before his appointment.

"Dear Sam, Today is our last day together. A day for hugging, a day for kissing, and a day to make sure you know that it is ok to go, as you have more than completed your job here on Earth as the best dog ever. Two and a half years after meeting, we find ourselves in another country on another continent with the most amazing adventures in our memory book. Through it all, amid increasing pain due to your worsening condition, you managed to take in all the wonders of not just one country, but two!

And finally, after a long, hard fight, your battle with the illness that pains you so is done. You've won. Job well done, buddy. I want to thank you, Sam, for everything that you have given me. I will never forget your goofy smile, your love for tennis balls, the way you always watched me with those big brown eyes of yours. Whenever I dance, I'll always leave room for you to jump up and join me. Whenever I go for a walk, I'll open the door extra wide and invite you to come with me. And every adventure that I find myself on, I will always bring you along with me and make sure that you see absolutely everything this world has to offer you."

We sat in front of the floor-to-ceiling windows of our high-rise apartment, overlooking the beautiful mountains and the city below us. I put my arm around him, pointed into the abyss, told him that he would become all of the things we could see from our window: the mountains, the clouds, the birds, the wind. And that I will remember him in all of them. After that, we went for one final walk. He jumped up on my bed as soon as we got home, and as he curled into a ball ready to fall asleep for the night, I read the letter to him. When I awoke the following morning, he had moved from my bed to his, lying next to a puddle of sick that I understood as the final sign of his body being done. 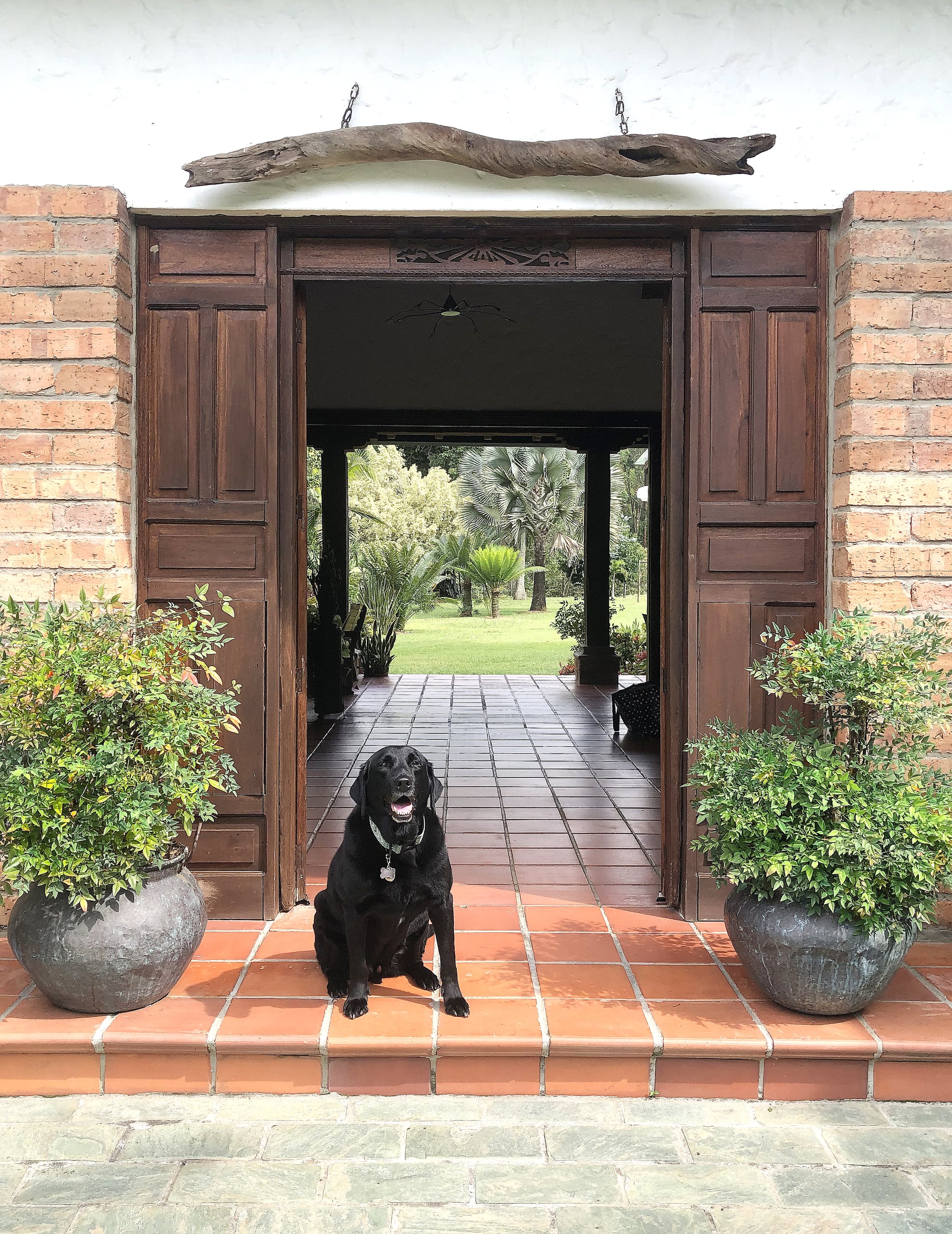 Just before his appointment, I read my letter to him once more. I quietly got my things ready and traveled downstairs to say goodbye to our security guards one last time. They looked at me with solemn eyes and then looked down at him.

"Is it time?" they asked. And began to weep as soon as I said yes.

I want to thank you, Sam, for everything that you have given me.

Sam pulled me to the vet as usual, even though the treats that lured him there no longer made it past a sniff. He entered the empty vet clinic one last time and greeted his friends, not knowing that the tears welling up in their eyes were for him. We laid him down in the lobby of the empty clinic, positioned his head on my lap, and started petting him gently from head to tail as the vet prepared his final injection.

As much as I wanted to cry on that cold veterinary floor in anticipation of losing my best friend, I knew that I had to stay calm in order to ensure that his final moments were lived without fear or worry. He began to slip away. As his breathing slowed, I continued to peacefully reassure him that both he and I were going to be OK. I reminded him that his job was done, that he could go, and that he had a beautiful reunion waiting for him with all of the people he has loved in his wonderful, mysterious life before I met him. I reminded him that I would be OK, that I would keep moving forward and that I would never forget about him.

With a gentle exhale, Sam took his last breath. His heart quietly stopped. His head was still on my lap, nose pointed towards me, and his eyes were still open.

"He doesn't want to stop looking at you," the vet said, through tears.

"And I never want to stop looking at him," I weeped.

Three months after his death, I am still baffled by just how much love Sam received up until taking his very last breath. Instead of ending his final days alone in a rescue facility, he was able to live them out in beautiful South America, alongside one grateful adoptive mama and scores of friends who loved him as if he were their own. His final breaths were taken in an environment he loved and felt comfortable in, while in the presence of only three humans – all of whom he knew and trusted. Sam's final moments were the opposite of "alone." Instead, they were filled with the love, peace, and comfort he needed to make it gently over the rainbow bridge, making this dying shelter dog's difficult last days truly wonderful, just like him.

And even in death, he continues to adventure with me everywhere I go. 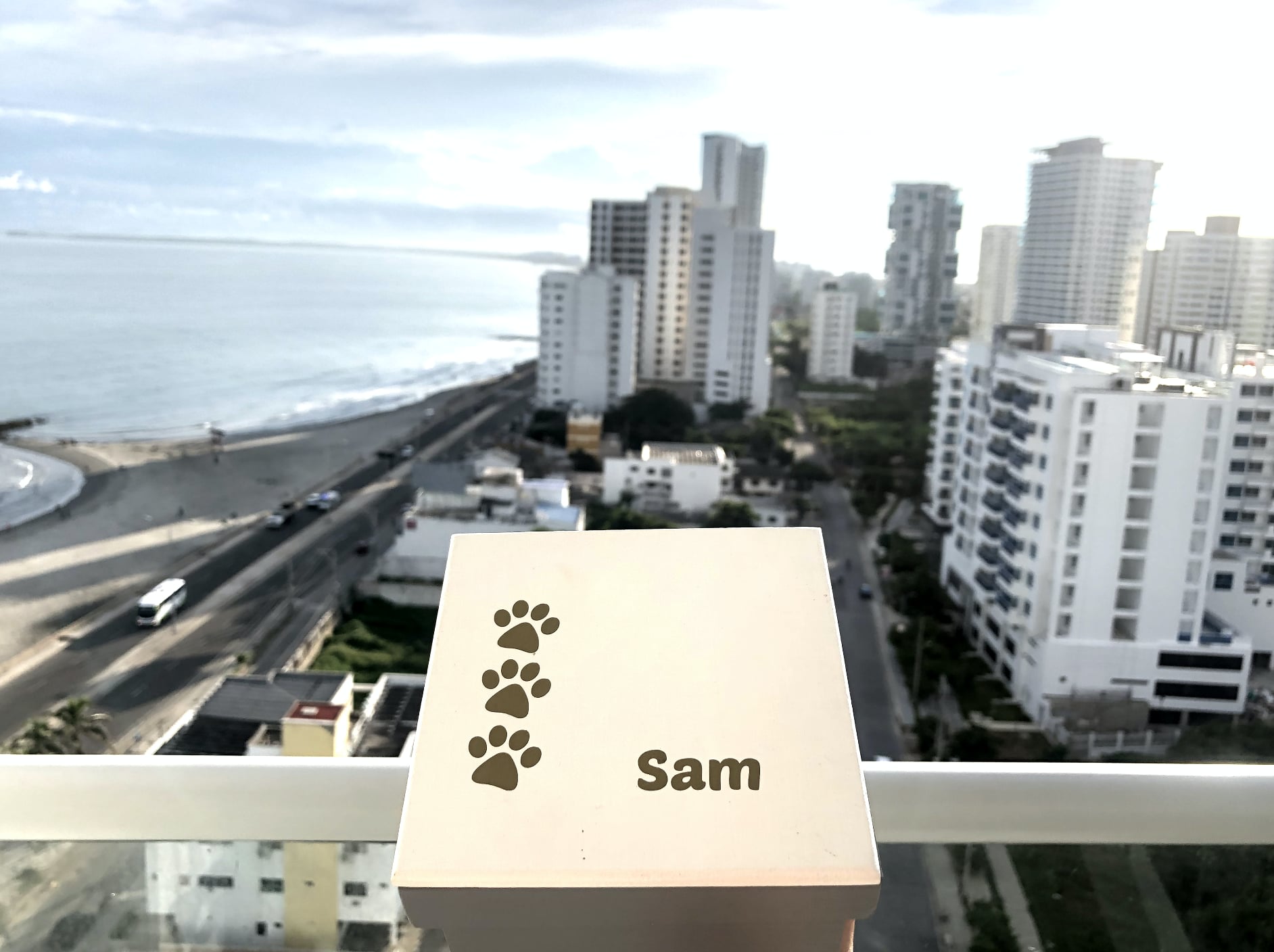