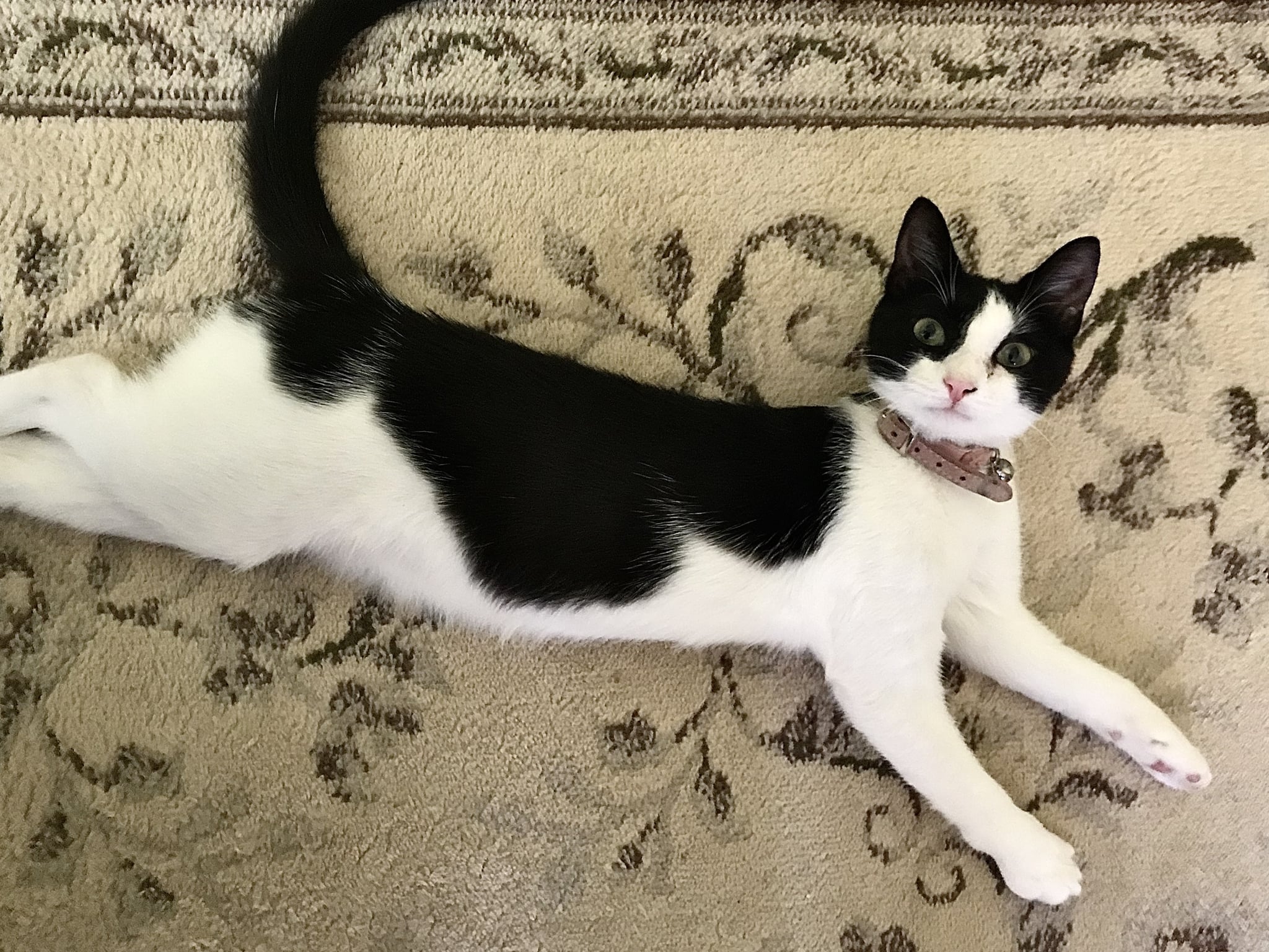 I've always been a cat lover. In my senior year of college, I filled that need with my roommate's sweet fur baby. The sadness I felt when my roommate moved out of our place, taking her cat with her? Unreal. So when one day, as I was driving back home from class, I saw a bunch of cats hanging out outside an abandoned house in my neighborhood, you can understand why I had to stop and take pictures. As I approached, the cats ran away, except one. The only one left was this tiny emaciated kitten — she was too weak to run away like the others. I would've left her alone, but she looked nearly dead and I couldn't leave her to fend for herself. I caught her by using an old box in my car and immediately took her to my local animal hospital. I named her Zebra after her black and white fur.

According to the vet, she had some form of kitty pneumonia. The infection had caused her to stop eating, so she was on the brink of starvation. Her chest was congested so badly that she struggled to breathe; even her meows sounded like rocks in a blender. Her left eye was also completely swollen shut. Needless to say, her recovery was going to take a lot of work. She needed several rounds of an antibiotic treatment at the animal hospital to help clear up her infection, plus the vet recommended three different medicines for her to take daily for her illness and her eye. Zebra was also so young when I found her that she had to be spoon-fed actual baby food. The vet explained what I'd need to do: feed her three to four times a day, apply a medication to her eye twice a day, and orally give her two different antibiotics. I can't lie, I was overwhelmed.

But I was prepared for the challenge: I took notes during each visit and asked every question I could possibly think of. I'd fallen in love with Zebra already, and this cat was not going to die on my watch. But this meant that I would have to completely change my hectic college lifestyle.

Related:
All the Important Life Lessons I Know, I've Learned From My Cat

The first thing I changed was the amount of time I spent on campus. With a busy schedule, I was away from home more often than not. And despite popular belief, kittens should be checked on every four to six hours when they're between 8 weeks and 6 months old, and they shouldn't be left alone for an entire workday until at least 6 months old. That meant no more late nights on campus, at least while Zebra was still a kitten. It turned out being home was good for me, too. I used that extra time to wind down, something I rarely ever did. It offered me a chance to disconnect from my busy college existence and to just breathe, which made a huge impact on how I handled the stress of school.

Next, I had to fix my eating schedule. My diet was unfortunately never really a priority to me, especially when I moved off campus. I'm embarrassed to say that I could go the entire day without eating and not even notice. I found that it was easier to remember to spoon feed my kitten if I feed her every time that I ate, especially since she needed to eat three to four times a day. But, in order to do this I had to actually eat at my place. While I could survive on a diet consisting of fast food and grab-and-go meals, my ailing kitten needed more attention. The vet recommended either feeding her mashed up wet cat food or actual human baby food (as long as it didn't have any seasoning in it, just chicken and water). So luckily for me, finding food for her was relatively cheap and easy. She only needed about half a small jar of baby food per feeding, so it was also pretty easy to stock up on.

Finally, I had to have some type of routine to make sure I was caring for her on time. I would wake up a couple hours before my first class to give Zebra her medicine and some food, clean up her space in my bathroom, and then drop her off at the vet for her treatment. I finally took advantage of the reminder app on my phone, and put sticky notes all around my room with reminders like "refrigerate Zebra's medicine" and "keep bathroom door opened for Zebra." This was a huge feat for someone as disorganized as myself. Up until that point, my planners remained empty and I mostly relied on memory to get me through my homework (how I managed all four years is a wonder). But I didn't mind the extra effort because it was nice to be able to pour myself into something other than my schoolwork, graduation, or work. In a way, it gave me a glimpse into what my life post-grad would look like. Instead of being focused on assignments, I will center my life around my well-being and the well-being of those in my care. There would be less disorganized days that lead into long nights.

I'm glad to say that work paid off because now, three months later, Zebra and I are inseparable. She has grown from this near-dead kitten into a hilariously curious and independent cat. Bringing her into my life has helped usher me into my new chapter of adulthood — which I'm excited to take on together.