When Walt Disney World opened the Haunted Mansion-themed gift shop Memento Mori in 2014, we thought it couldn't get better than that. Well, rumor has it Disney World is stepping up its game — again.

Multiple reports are hinting at the possibility of a Haunted Mansion restaurant in the Magic Kingdom, based on the classic park attraction. Disney World has already proven that it's open to attraction-inspired restaurants; the Jungle Skipper Canteen is a full-service restaurant based on the popular Jungle Cruise ride in the park. 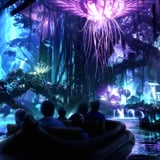 Yes, You Can Visit Avatar's Pandora — Find Out Which Disney Park Will Have This Land in 2017

For now, the rumors about a Haunted Mansion-themed restaurant are just that: rumors. Still, fans of the creepy ride (and who isn't a fan?!) can keep their fingers crossed that this idea will indeed become a reality. Stay tuned for any updates as soon as we get them.

Shopping Guide
Bibbidi-Bobbidi-Boo, Bring the Magic Home With 26 New Finds From the Disney Store
by Anvita Reddy 4 days ago

Nostalgia
I Rewatched These 6 Disney Movies as an Adult, and I Have Questions
by Grayson Gilcrease 4 days ago