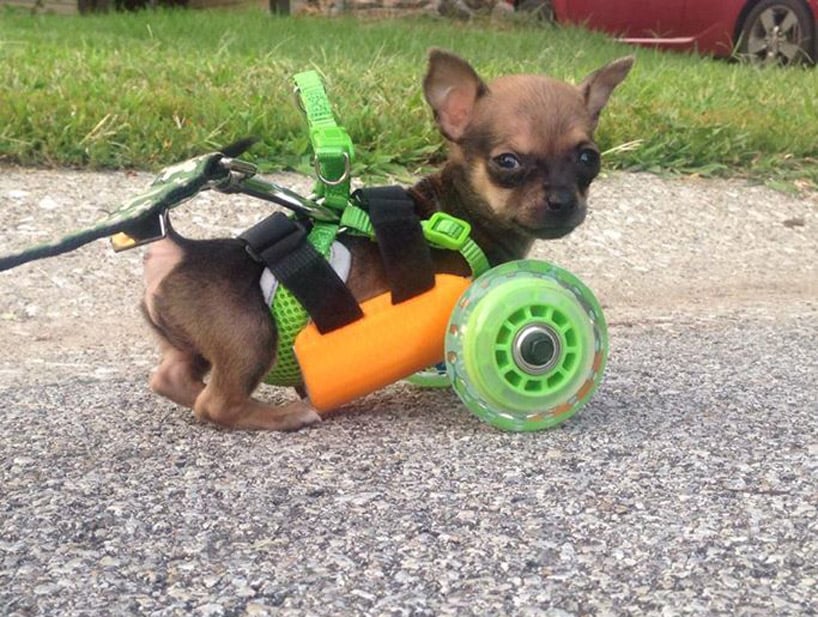 This is TurboRoo, a Chihuahua puppy born with a birth defect that stunted the growth of his front two legs, giving him only the use of his back legs. But now, the one-pound, three-ounce pup is getting around in custom 3D-printed style, thanks to a kind fan that heard Turbo's story from more than 2,000 miles away.

TurboRoo ended up at The Downtown Veterinarian in Indianapolis after his previous owners weren't able to care for his disability. Ashley Looper, one of the office's veterinary technicians, fell in love with TurboRoo and not only ended up taking him home, but also starting a campaign to raise the $600 needed to give TurboRoo a wheelchair so he can get around on his own. The campaign now has more than $3,600 in donations and received a big surprise when Mark Deadrick, the president of 3dyn, a design shop in San Diego that makes prototype components for companies like SpaceX, heard about TurboRoo's situation and got his team of in-office 3D printers to help the pup.

According to RTV6 in Indianapolis, Deadrick made three versions of a cart for TurboRoo while the dog waits for a permanent ride once he's fully grown at 6 months. Here's the original prototype . . .