Update:
The wildly popular Exploding Kittens card game will finally begin shipping to its Kickstarter backers today. The game broke a Kickstarter record back in January when it became the most funded project ever. If you missed out on funding it back then, not to worry. You can still get your hands on a pack by heading to the website and signing up for the mailing list to be notified when it's available for sale.

Original story:
"This is a card game for people who are into kittens and explosions and laser beams and sometimes goats." That's the description for a new card game called Exploding Kittens from the hilarious, sarcastic site The Oatmeal. And apparently that's all people needed to hear before funding the Kickstarter project in just 20 little minutes. At the time of this writing, the project has raised nearly $8.8 million and officially broken Kickstarter's record for the most backed project of all time with over 219,000 people pledging to make the game a reality.

Here's a description from the creators:

"Exploding Kittens is a highly strategic kitty-powered version of Russian Roulette. Players take turns drawing cards until someone draws an exploding kitten and loses the game. The deck is made up of cards that let you avoid exploding by peeking at cards before you draw, forcing your opponent to draw multiple cards, or shuffling the deck. The game gets more and more intense with each card you draw because fewer cards left in the deck means a greater chance of drawing the kitten and exploding in a fiery ball of feline hyperbole." 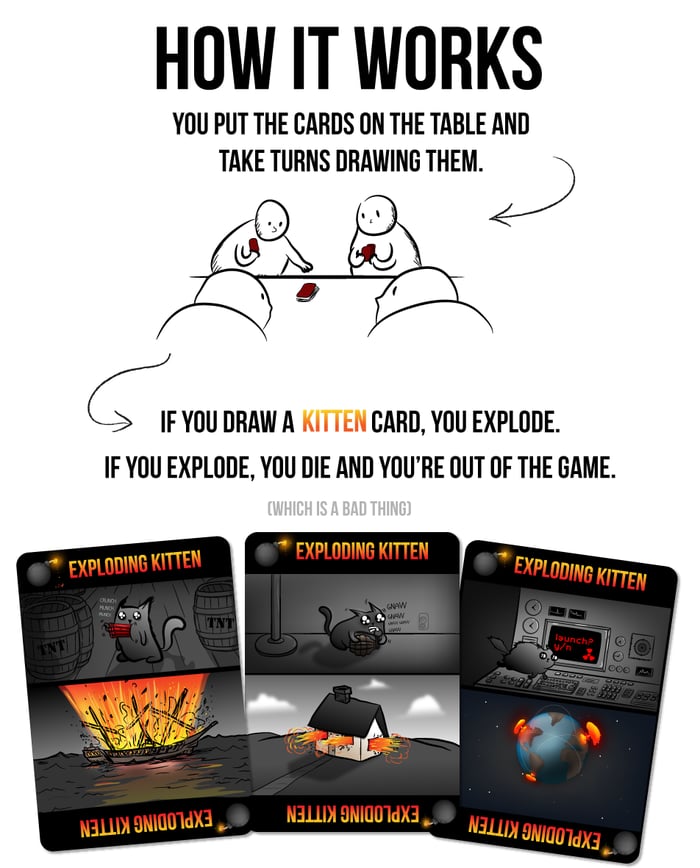 Sounds like we have another viral game on our hands.