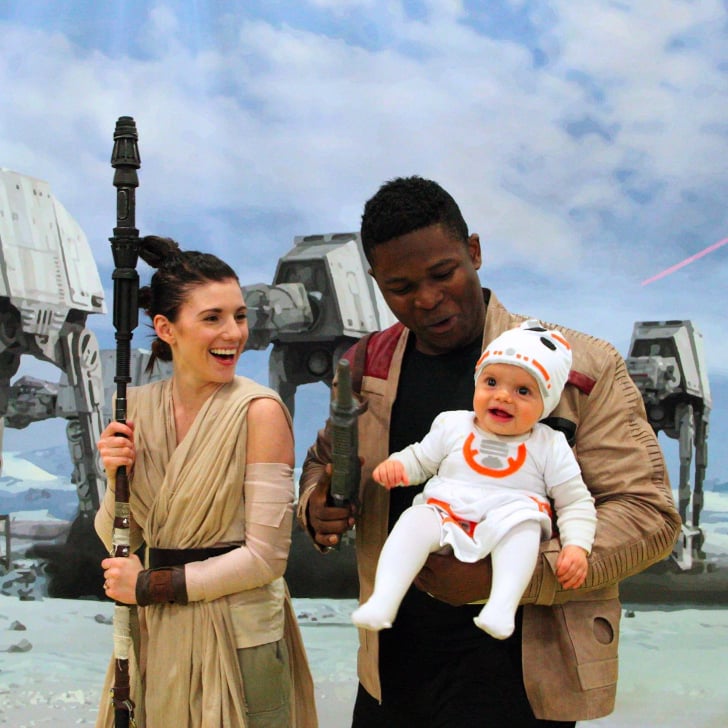 Comic-Con: an event to show off your fandom allegiance but also a way to show the amateurs who's boss. One couple at this year's Salt Lake City Comic-Con (SLCC) clearly won the fandom game by dressing as Rey and Finn from Star Wars: The Force Awakens. But dressing their adorable daughter as BB-8 truly makes this costume too cute and almost impossible to replicate.

Victor Sine and Julianne Payne, the geniuses behind the cosplay, are engaged and live in Salt Lake City. Their adorable daughter, Addie, is BB-8. Despite what you may think, Payne had never seen Star Wars before binge-watching all of the films to prep for The Force Awakens, Sine told us in an email. He added that he always wanted to go to Salt Lake's Comic-Con, and after they saw the movie, it was clear they were going to cosplay as Finn and Rey. Payne made the majority of her cosplay costume, and Sine bought his but tailored it to his style. The couple bought baby Addie's costume on Etsy. Unsurprisingly, it took them four months to pull together this incredible costume. Obviously, everyone at SLCC loved their dress-up — how could they not?

Sine and Payne aren't just Star Wars cosplay experts — they've also rocked Cinna and Katniss cosplay from The Hunger Games, sans Addie. Don't be disappointed, though, as they have more cosplay plans for the future that include Addie. Sine hinted at a potential Jessica Jones, Luke Cage, and his baby future cosplay — something we're eagerly awaiting.

For more photos of their cosplay, hop on over to their Facebook page. Take note, those who plan on dressing up as Star Wars characters on Halloween — this is how it's done.