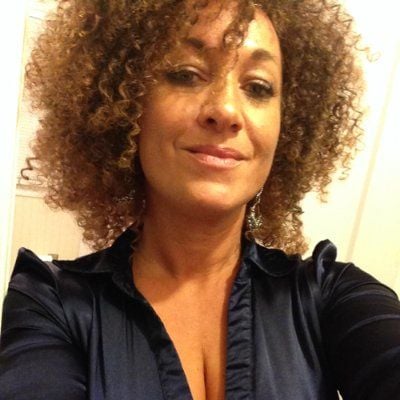 Update: Rachel Dolezal, the woman who pretended to be black and ignited a controversy over her identity, has resigned from her position as President of the Spokane, Washington chapter of the NAACP.

Original story: This just in: the president of the Spokane, WA, chapter of the NAACP has pretended to be black for years. And, of course, everyone is freaking out.

The woman in question is Rachel Dolezal, a professor of the Africana Studies Program at Eastern Washington University and NAACP president. The story broke Thursday night, after a local newspaper in Washington, The Spokesman Review, published various quotes from Dolezal's parents stating that she is not African American, but rather has Czech, Swedish, and German roots with "faint traces of Native American heritage."

Dolezal, who holds a master's degree from Howard University, a historically black college she attended on a full scholarship, appears to have fabricated an entire life as an African-American woman, posting photos of her "natural curls" on her Facebook and identifying two young black men as her sons, but according to her parents, they are her adoptive brothers. "It's very sad that Rachel has not been herself. Her effectiveness in the causes of the African-American community would have been so much more viable, and she would have been more effective if she had just been honest with everybody," said Ruthanne Dolezal, the mother of Rachel to The Spokesman Review.

Below is a video of Dolezal being questioned about her background and walking away after refusing to answer a reporter's question of whether or not she is African American.

Meanwhile, people are continuing to react on Twitter with several hashtags, including #RachelDolezal, #AskRachel, and #Blackreceipts, with more likely to follow. Under the first hashtag, people are wondering why a person would do this and the greater conversation around what it means to be black in America.

On an ending note, #RachelDolezal's white privilege allowed her to decide to wear blackness like a pair of panties.

Just a friendly reminder that a black person passing as white was once a criminal offense. Enjoy ur day. #RachelDolezal

She wanted the Black Experience™ and when it wasn't BLACK enough, she faked hate crimes on herself. Crying wolf ≠ helping. #RachelDolezal

Under #AskRachel, several Twitter users are using the topic as a way of poking fun at themselves and to highlight their experiences as African Americans.

Your mama is giving you a whoopin & you start crying. Does she: A) sit u down & talk OR B) "give you sumn to cry about" #AskRachel

#AskRachel Should you ever go chasing waterfalls? A) Yes! Waterfalls are amazing! B) No. I should stick to the rivers and lakes I'm used to

#AskRachel It was all a dream, I used to read.. A. The New York Post. B. Word Up Magazine C. Harry Potter D. Better Homes and Gardens

The conversation also took a more serious tone with #Blackreceipts, which was used by people who are lighter-skinned African Americans but wanted to show they weren't lying about their background.

Hol on let me post my #blackreceipts before y'all come for me pic.twitter.com/8WuvMoNFLx

There's also another hashtag associated with the news, but its roots arise from trolls on Tumblr. The hashtag, #Transracial, attempts to equate transgender people in the same vein as Rachel Dolezal, an African-American woman who was born into a white body.

While the reactions continue to pour in under these hashtags, there's still no official statement from Dolezal herself, but it is expected soon. Hopefully, she'll answer the biggest question on everyone's mind: Why would she ever pretend to be an African-American woman?