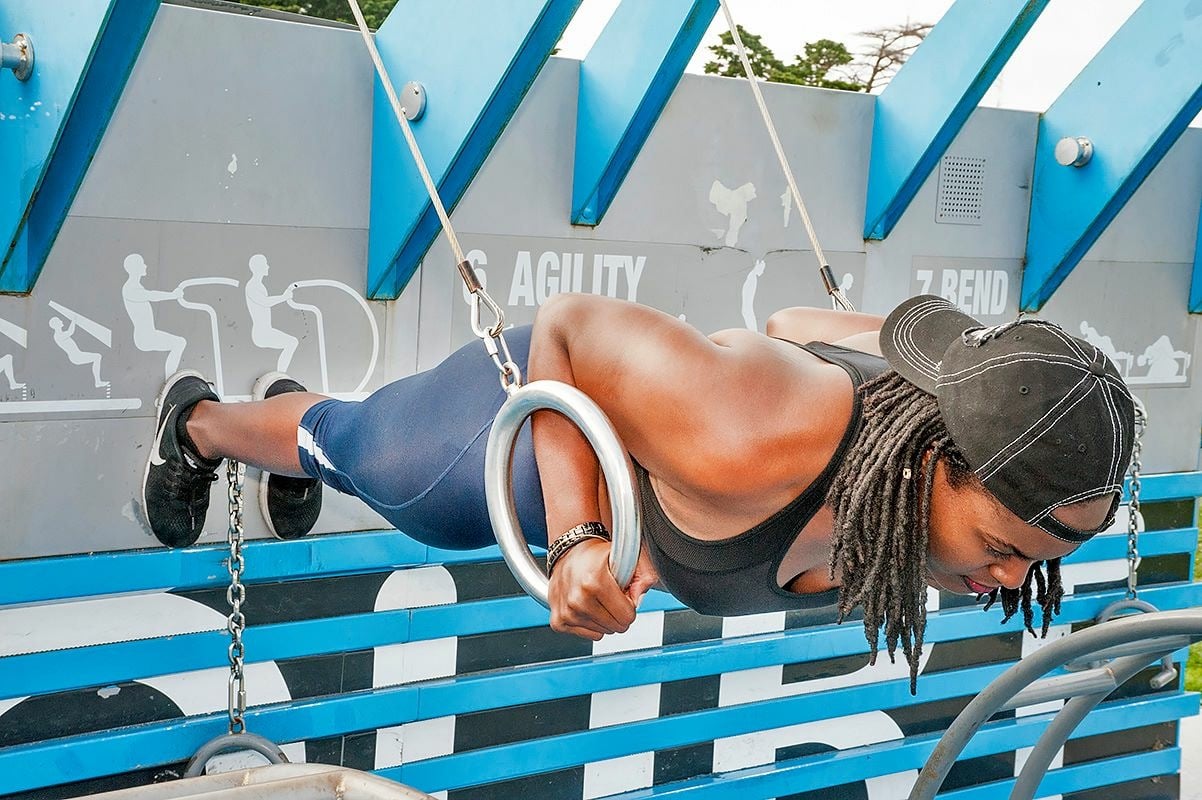 Clinay Cameron had no connections in Silicon Valley, growing up in Section 8 housing in Rialto, CA. As a kid, peers teased her about her weight, teachers talked down to her, and she endured the trauma of watching multiple gang-related shootings as a child — the first when she was just 5 years old. Today, at age 27, Clinay is a Yelp employee, an entrepreneur, a Strongman competitor, and a mentor for black and brown youth learning to code in the Bay Area who's remarkably driven to help other young women of color find success.

Cameron says it's not easy to move up in the tech and corporate worlds, especially since only about 10 percent of employees at major tech companies are black, according to company-reported data. Seventy-five percent of black women in STEM fields said they faced additional challenges, such as others repeatedly questioning their experience and discounting their success, according to a review of diversity in tech data from 2014 by the US Equal Employment Opportunity Commission.

Cameron, who lives and works in the Bay Area, is currently founding Tech Fit Creative, a marketing coworking space in the San Francisco East Bay — unique because it focuses on fitness entrepreneurs. She also juggles her existing business, Living Proof Strength and Fitness — which focuses on personal training, lifestyle mentorship, and coaching — with her occasional speaking engagements at conferences on diversity and inclusion in the tech and digital entertainment industries.

Cameron says her peers were nervous to even apply to top California colleges because they had the impression they didn't belong there. She earned a bachelor's degree from UC Berkeley in sociology and later a BS in animation and visual effects from Ex'pression College, paying for Berkeley through an academic scholarship and for design school by taking out student loans. Once she finished, she realized that having an understanding of branding, marketing, and technology were integral for business in the Bay Area. So she signed up for bootcamp courses at Hack the Hood, an Oakland, CA, nonprofit that aims to narrow the diversity gap in Silicon Valley. She says she went from not even knowing the definition of "venture capital" to netting investors to fund the start of her business.

POPSUGAR: What challenges did you have to overcome as a young woman of color while pursuing your education?

Clinay Cameron: I had a math teacher who said she'd be surprised if I made it into Cal State. . . . It was just very condescending, and you could tell that when I walked in the door, her nose would turn up. And another teacher said, "Bring your medical degree when you get it. Because I'd be surprised if you did." All those instances were just fuel. I'm not a doctor, but at the end of the day, I'm going to own my own business. I'm not that bad statistic that you expect me to be.

"Some of these people are geniuses; it's just their dialect is different."

PS: Where do people of color, and especially women, get held back from becoming CEOs or business owners?

CC: I think a lot of women of color get held back because they think [their current situation] is their limit. They aren't given an opportunity to go beyond that. And they feel even afraid to ask because they fear retaliation, whereas my male counterparts, my white male counterparts . . . they aren't afraid to challenge others. We've been taught to conserve ourselves: just do the job, work for two or three years — whereas "Johnny" is moving up in six to eight months. I think that's a huge limitation, and I think a lot of people need to address that and also provide opportunities for women.

I think they doubt us before we're even given an opportunity, and because of that we doubt ourselves. We have that fear of "Oh, I can't do it," when in reality we could probably do it three times over.

PS: How does early access to technology skills and business-minded culture change the playing field for people of color?

It's hard getting to a point where we can provide access and also reach out to somebody outside of our communities and cultures in order for them to be able to have that same opportunity. And I think people are saying, "We have these programs." That's great, but do these people [who need these programs] know about it? I know American culture says to pull us up by our own bootstraps. But when I talk to people [of color], we're taught that this [limited view] is where we're going, and that's it. And there are very few people who decide or are in the position to go outside that.

PS: How do minority-focused coding boot camps — such as Hack the Hood, which you attended — and entrepreneurship courses help tackle Silicon Valley's diversity problem? What strategies have you seen for inclusion that work, and what needs improvement?

CC: I think it definitely benefits people of color and women of color because these programs are fair. But I think that there are still some gaps that need to be filled. When it comes to introducing people to these things, I just think there's more we can do. Had I not gone to get my car washed [and seen Hack the Hood across the street], I wouldn't have known that program existed.

Marketing these things more could help a great deal. Even going to the physical schools [to recruit] will help. That's not to say that people aren't doing that. . . . What I've seen that has been successful is that people who work [or live] in that community, they reach out to their friends that they know from their hometown, from their circle. I think more of that needs to happen and needs to be encouraged. Some of these people are geniuses; it's just their dialect is different.

"I addressed them head-on and said, 'What are you going to do to have women of color being introduced to these programs?' And they were taken aback."

PS: It's been argued that Silicon Valley executives should take this concern of low representation of people of color in their businesses as a serious financial concern, in addition to a social concern. What do you think about that?

CC: They're missing out on talent. Just the fact that we look different, it shouldn't distinguish whether or not we're capable of doing the job. They need to have emotional intelligence to dispel or tone down the unconscious biases because it doesn't make any sense. . . . That needs to be addressed on a larger scale, and people not being afraid to speak up.

I was just at a Women in Animation panel, and I was nervous, but I addressed them head-on and said, "What are you going to do to have women of color being introduced to these programs?" And they were taken aback; they didn't even know what to say because they were so used to saying, "More women, more women . . ."

CC: Right! [Laughs.] Addressing things like that. What are you going to do? And if you don't know what to do, how are you going to act on that? Because I get it — you want more women, but that's not diversity. It's not.

I'm glad to see that more women are trying to become their own bosses, but it would be nice to see them have a chance in the corporate world if they wanted to.

PS: What made you want to be a fitness entrepreneur?

CC: There were several different things that took place, [like] fighting childhood obesity, also dealing with family members who suffered from chronic obesity and heart failure. I didn't want to go down that path. My mom was a diabetic, as well. And so I was teased a lot when I was younger. When I was in high school, I decided to try and change that around and say, "I'm just going to go full on in sports. I'm going to change my eating habits." It just went on from there. And then I became one of the top athletes at my high school.

Long story short, everything went downhill. I went from a solid 180 pounds, athletic, and then . . . I gained the Freshman 50. Then, [later on in college] I got to walk on as an athlete [as a thrower for the track-and-field team]. It's just been a roller coaster. So fast-forward: 2013. I started building my [fitness] programs, and they started working, and they were working even better than some programs I had from coaches.

PS: How did you teach yourself that business of entrepreneurship?

CC: Asking questions. Curiosity. Meeting people. Finding mentors. People would always say, "Find a mentor." And I would say, "What is a mentor?" So I looked it up, and I would say, "I want to know what this person is doing because they're obviously successful." I ended up meeting a boxing coach . . . and he ended up opening up his own gym. He said, "If you ever have questions [about the industry], feel free to reach out."

PS: How has training for fitness competitions like Strongman challenged others peoples' perceptions of what you can achieve?

CC: I think I tell people this all the time that I compare fitness to life. Fitness and strength. When you're able to lift something that you don't think you can, and you do it, that is an accomplishment in itself.

I apply Strongman and deadlifting to my own life, and it makes me reflect: OK, if I can lift this stone, I for damn sure can learn how to run a business. I know it's two opposites, but I think it helps with confidence. And when I didn't have that, when I had those gaps [in my life], I was more doubtful. I was more afraid. I think having that constant helps a great deal. Being able to find something extracurricular that you can parallel to your own personal dreams and personal goals I think helps a lot.

Strongman is a predominantly white sport, and I think that intimidates a lot of people, so not to boast about it, but it's empowering because it goes back to the work world. I like that challenge because I feel like I'm breaking the boundaries that are posted. . . . I feel like opportunities are limitless. If I don't go take the opportunity, I won't know how far I can go.

This interview has been condensed and edited for clarity.

Image Source: Photos courtesy Clinay Cameron
How 1 Tech Entrepreneur Is Harnessing Her Strength to Lift Up Other Women of Color  originally posted on POPSUGAR News
Black History MonthDigital LifeEntrepreneurTech
Around The Web

Tech Tips
Did You Know You Can Blur Your Background on Google Meet? Here's How
by Ashley Broadwater 16 hours ago