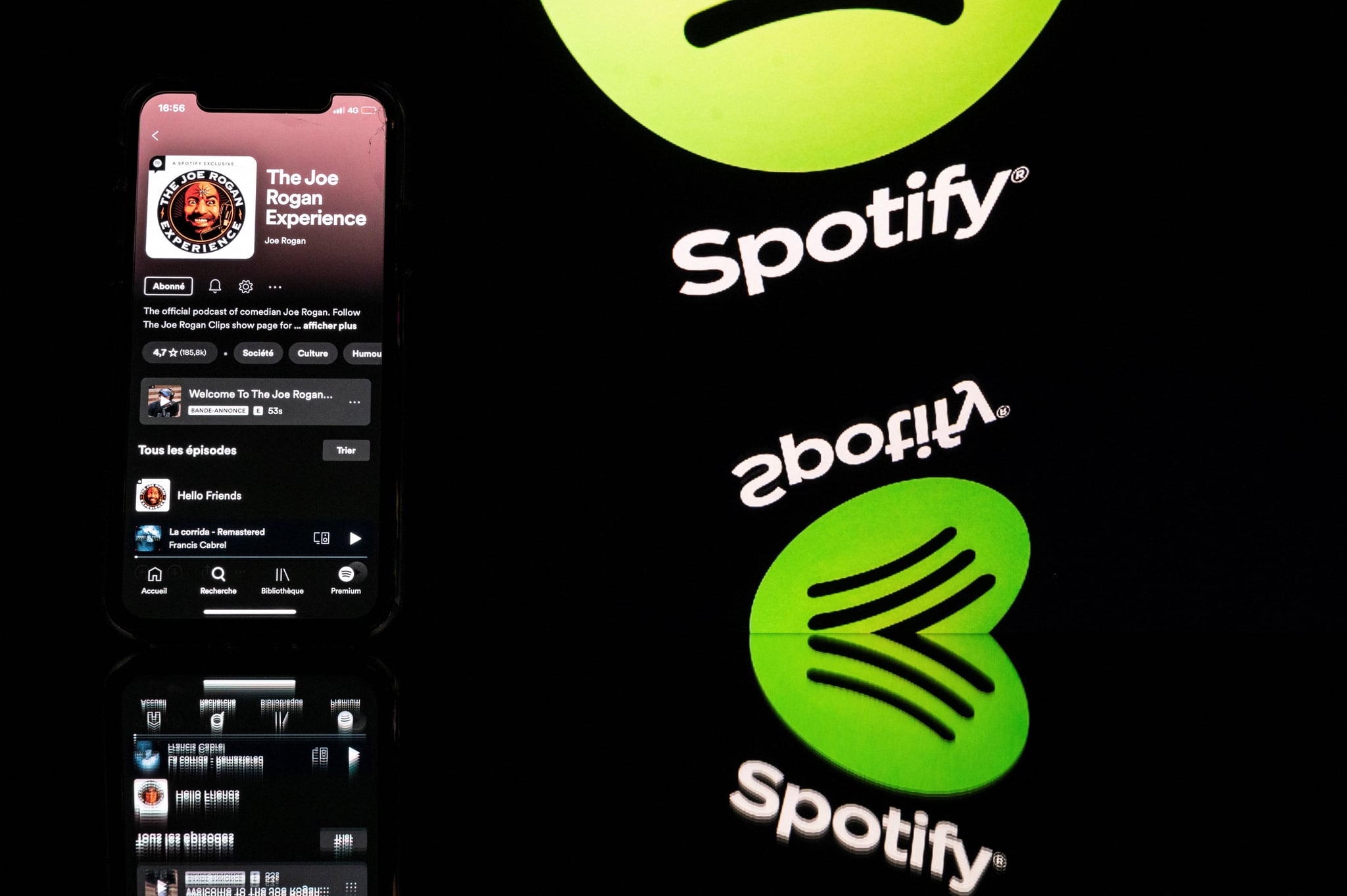 Spotify has recently come under fire for its decision to retain the "Joe Rogan Experience" podcast among its exclusive lineup, despite the rightful public outrage over Rogan's documented history of spreading COVID-19 misinformation, past use of racial slurs, and overall harmful rhetoric surrounding race, gender, and more on his podcast. During a recent town-hall meeting to address employees' concerns regarding the "JRE" podcast and its resulting backlash, Spotify CEO Daniel Ek reportedly defended the decision to keep the podcast in a lengthy speech to staff.

"We're not in the business of dictating the discourse that these creators want to have on their shows," Ek reportedly told staff, according to a recording of the meeting obtained by The Verge. "And if we only wanted to make content that we all like and agree with, we will need to eliminate religion, and politics, and comedy, and health, and environment, and education, the list goes on and on and on because these are really complicated issues. And if we limit these divisive topics, top creators will leave and users deprived of the choice in content would flee from our platform and seek other alternatives."

Ek reportedly continued listing justifications for Spotify's stance on Rogan's "JRE" podcast, which apparently include Spotify's mission to become a leader in podcasts, the value associated with exclusive podcast deals, the company's lack of creative control over its creators' content as a "platform" and not a "publisher," and, ultimately, the sheer amount of searches for Rogan's podcast on Spotify.

Ek also noted that, despite Spotify's deal with Rogan, the platform has removed certain "JRE" podcast episodes that violate Spotify's platform rules, which contain guidelines and grounds for removal of content it deems dangerous, deceptive, sensitive, or illegal. Spotify only recently released these guidelines publicly following intense backlash from healthcare professionals over the platform's slow response to concerns about figures like Rogan, who's been accused of spreading misinformation related to COVID-19 on multiple occasions.

"[I]t's become clear to me that we have an obligation to do more to provide balance and access to widely-accepted information from the medical and scientific communities guiding us through this unprecedented time."

"You've had a lot of questions over the last few days about our platform policies and the lines we have drawn between what is acceptable and what is not," Ek wrote in a statement on Spotify's digital newsroom. "We have had rules in place for many years but admittedly, we haven't been transparent around the policies that guide our content more broadly. This, in turn, led to questions around their application to serious issues including COVID-19.

"Based on the feedback over the last several weeks, it's become clear to me that we have an obligation to do more to provide balance and access to widely-accepted information from the medical and scientific communities guiding us through this unprecedented time."

In response to the Spotify controversy, Rogan said in a Jan. 30 Instagram video that he is "not trying to promote information," nor is he "trying to be controversial." "I've never tried to do anything with this podcast other than just talk to people and have interesting conversations." Spotify also said it plans to "add a content advisory to any podcast episode that includes a discussion about COVID-19," which will prompt users to visit the platform's COVID-19 information hub.

Later, on Feb. 18, Spotify users were surprised to see that the "Joe Rogan Experience" was nowhere to be found on the platform, prompting questions about whether the controversy had finally resulted in the removal of the podcast from Spotify. However, the company later attributed the disappearance to more widespread technical issues. On Monday, Feb. 21, listeners noticed, again, that the "JRE" podcast had vanished from the platform, although it returned later the same day.

The steps Spotify's taken to address the controversy haven't stopped some artists from denouncing Spotify's response to the matter and pulling their music from the platform as a result. Neil Young posted, then deleted, a statement to Spotify on his website asking that the company remove his music and content from its platform. Singer Joni Mitchell soon followed suit, as have a growing number of other artists and creators, including singer and podcaster India Arie; Mary Trump; the band Crosby, Stills & Nash; author Brené Brown; and author Roxane Gay.

Some suspect Prince Harry and Meghan Markle may also rethink their relationship with Spotify after the two previously expressed concern over the spread of COVID-19 misinformation. "We have continued to express our concerns to Spotify to ensure changes to its platform are made to help address this public health crisis," a spokesperson for the couple's Archewell Foundation said, according to Reuters. "We look to Spotify to meet this moment and are committed to continuing our work together as it does." The couple's account, Archewell Studios, has only published one podcast as of this writing.

Others are curious about the fate of Barack and Michelle Obama's podcasts, born from the couple's 2019 deal with Spotify. "Vanity Fair" reports the Obamas' production company, Higher Ground, previously expressed frustration with Spotify over putting new podcasts in motion. Now, the three-year contract is due to end soon, and it's reportedly currently unclear if the couple is planning to continue its relationship with the platform.

POPSUGAR reached out to Spotify for additional comment on the backlash and town-hall meeting, as well as on artists' decisions to remove their music from Spotify, but did not hear back by the time of publication.

Spotify's Financial Relationship With Artists Already Had a Complex History

The "JRE" controversy surely isn't Spotify's first time in hot water. Since the early 2010s, when streaming services like Spotify or Pandora began to grow in popularity stateside, musicians have had a fraught relationship with these platforms. For avid music consumers, streaming services were a welcome reprieve from paying for individual songs and albums. Listeners could, instead, pay platforms like Spotify a lump sum every month in exchange for access to a music database that's since grown exponentially. As regular listeners on these services shot up into the millions, so did the artists eager for exposure to newer, bigger audiences.

Especially for smaller artists who rely on these platforms, the ultimate payout from streaming platforms is minuscule and hugely disproportionate to the time and creative labor their work requires.

As it does with most things, however, consumerism quickly reared its ugly head. The through line among the many concerns musicians have with music streaming platforms is, of course, money. The royalties an artist receives from Spotify, for example, largely depend on how the rights of the artist's music are distributed among the artist, record labels, distribution companies, and other stakeholders. After all parties are paid their share, then an artist gets their final cut.

Especially for smaller artists who rely on these platforms, the ultimate payout from streaming platforms is minuscule and hugely disproportionate to the time and creative labor their work requires. Reports of Spotify's average payout to artists per stream vary — and, again, the total depends on a number of factors — but most hover around less than a cent, although this appears to be the case for multiple popular music streaming services. This means, on average, an artist may need at least 200 streams before they can earn $1 from the platform. This is compared to the average seven cents an artist might receive from a 99-cent song purchase, of which an artist would only need about 15 to earn $1. But given that physical sales in the music industry continue to see a sharp decline as streaming services remain the consumer default, artists are stuck between a rock and a hard place: make a smaller profit on a platform with lots of users or try for a greater profit elsewhere with notably fewer consumers.

As Tensions Mount, the Search For Alternatives to Spotify Begins

Already, searches for Spotify alternatives have skyrocketed as the "JRE" controversy continues to unfold. The good news? Plenty of reputable music streaming platforms with databases comparable to Spotify's exist. The not-so-good news? Lots of other streaming platforms appear to follow a similar pay structure to Spotify. Still, if you're in search of a new music service, you have options, most of which offer a free trial period for you to test it out.

With more than 90 million songs, more than 30,000 curated playlists, and plenty of your favorite podcasts, Apple Music is one of the most comparable streaming platforms to Spotify. The service features ad-free listening and artist exclusives, among other features like full song lyrics, spatial audio capabilities, and multiuser plans. The least-expensive Apple Music options, the Voice Plan and the Student Plan, each begin at $4.99 per month. From there, plans get incrementally more expensive, but boast additional features.

Tidal gained widespread interest when JAY-Z acquired the music subscription service in 2015, though he later sold his majority stake in the company to former Twitter CEO Jack Dorsey. Over the years, Tidal's popularity has fluctuated, with some criticizing the $20 price tag on its most advanced subscription plan. That said, Tidal remains a major player in music streaming, offering a free plan (with ads) and a $10-per-month plan alongside its more expensive HiFi Plus plan. In addition to housing more than 80 million songs and lossless audio, Tidal also offers artists a larger average payout than most other platforms.

Much like its counterparts, YouTube Music at its most basic is free to use. However, you will have to sit through some ads, and the free version isn't very mobile friendly. (Your smartphone screen must remain unlocked, and your YouTube app must be open.) But at $10 per month, an individual YouTube Music Premium account will hook you up with all the features you know and love on other music streaming platforms, like access to a vast music database and ad-free listening (yes, even when you lock your phone). YouTube Music also features a student plan for $5 per month and a family plan supporting up to five users for $15 per month. Pro tip: purchasing a general YouTube Premium plan will give you all the perks of YouTube Music Premium, plus the ability to watch regular YouTube videos without ads.

If you have an Amazon Prime account, then you already have access to an Amazon Music Prime account. While the free Amazon Music plan (for non-Prime customers) comes with limited basic features, Amazon Music Prime is a step up, offering listeners access to two million songs, thousands of playlists, tons of podcasts, and ad-free offline listening. The more expensive Amazon Music Unlimited, however, costs $10 per month for non-Prime members and $8 per month for Prime members. This tiered plan includes unlimited ad-free, offline listening for more than 75 million songs, as well as other features, like spatial audio.

Every music streaming service surely has its pros and cons, but when it comes to Spotify's handling of the Rogan controversy, one thing is certain: for gargantuan corporations, potentially harmful misinformation talks, but money talks louder.