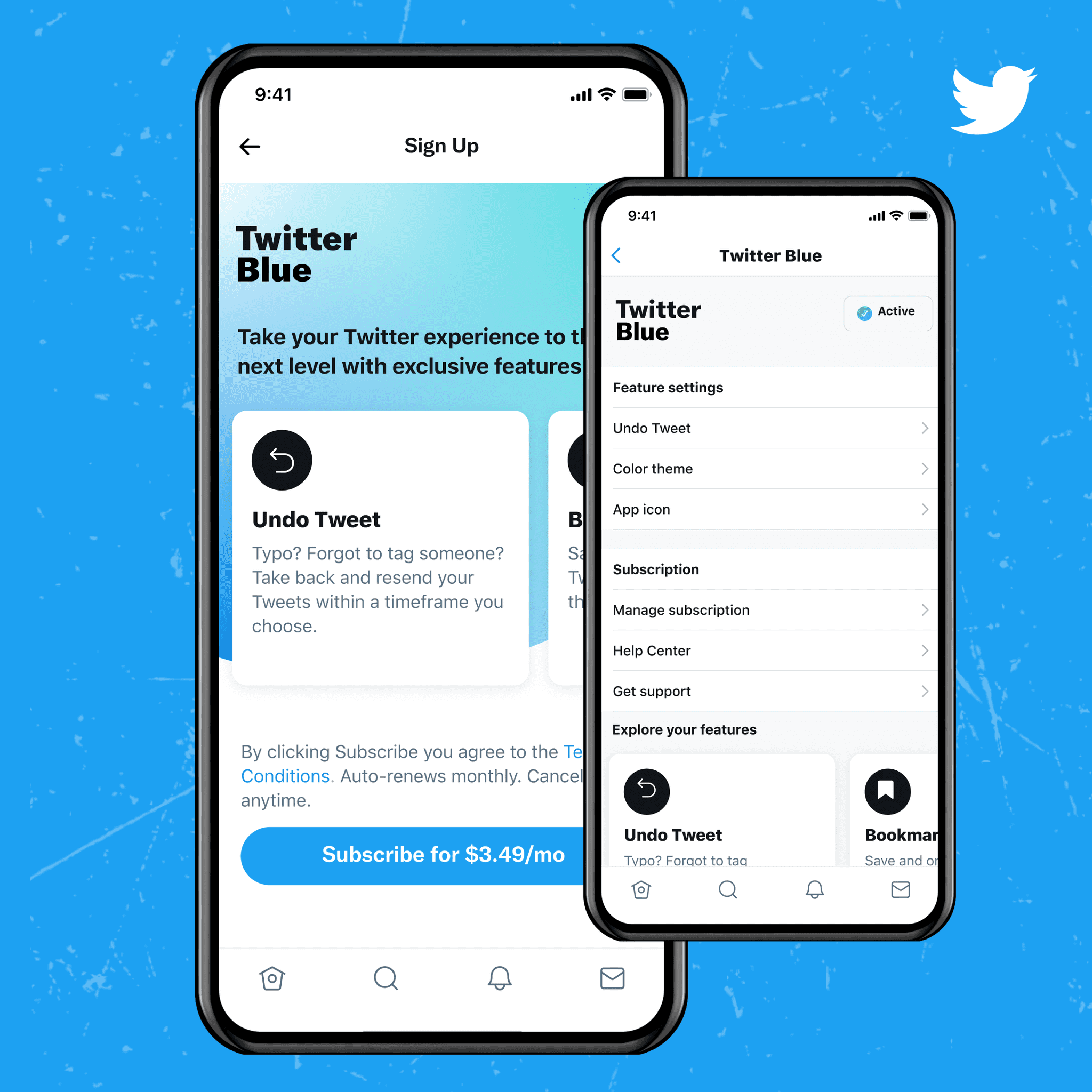 We've all been there: you've just crafted the most genius, wittiest tweet that's guaranteed to go viral when you notice a typo. It's surprisingly infuriating, but now, there's a new Twitter feature meant to stop those frustrating moments in their tracks. Earlier in 2021, in Canada and Australia, Twitter rolled out Twitter Blue, a subscription service that unlocks a host of new Twitter features. After a months-long testing period, Twitter Blue became available in the US on Nov. 9 and now offers stateside users the ability to do things like undo tweets, access news without ads, and more. The one catch? You have to pay for it.

The paid subscription service was essentially designed to deliver Twitter users a more curated experience with features many have requested for quite some time. "We've heard from the people that use Twitter a lot, and we mean a lot, that we don't always build power features that meet their needs. Well, that's about to change," reads a blog post on Twitter's website about Twitter Blue's release. "We took this feedback to heart, and are developing and iterating upon a solution that will give the people who use Twitter the most what they are looking for: access to exclusive features and perks that will take their experience on Twitter to the next level." 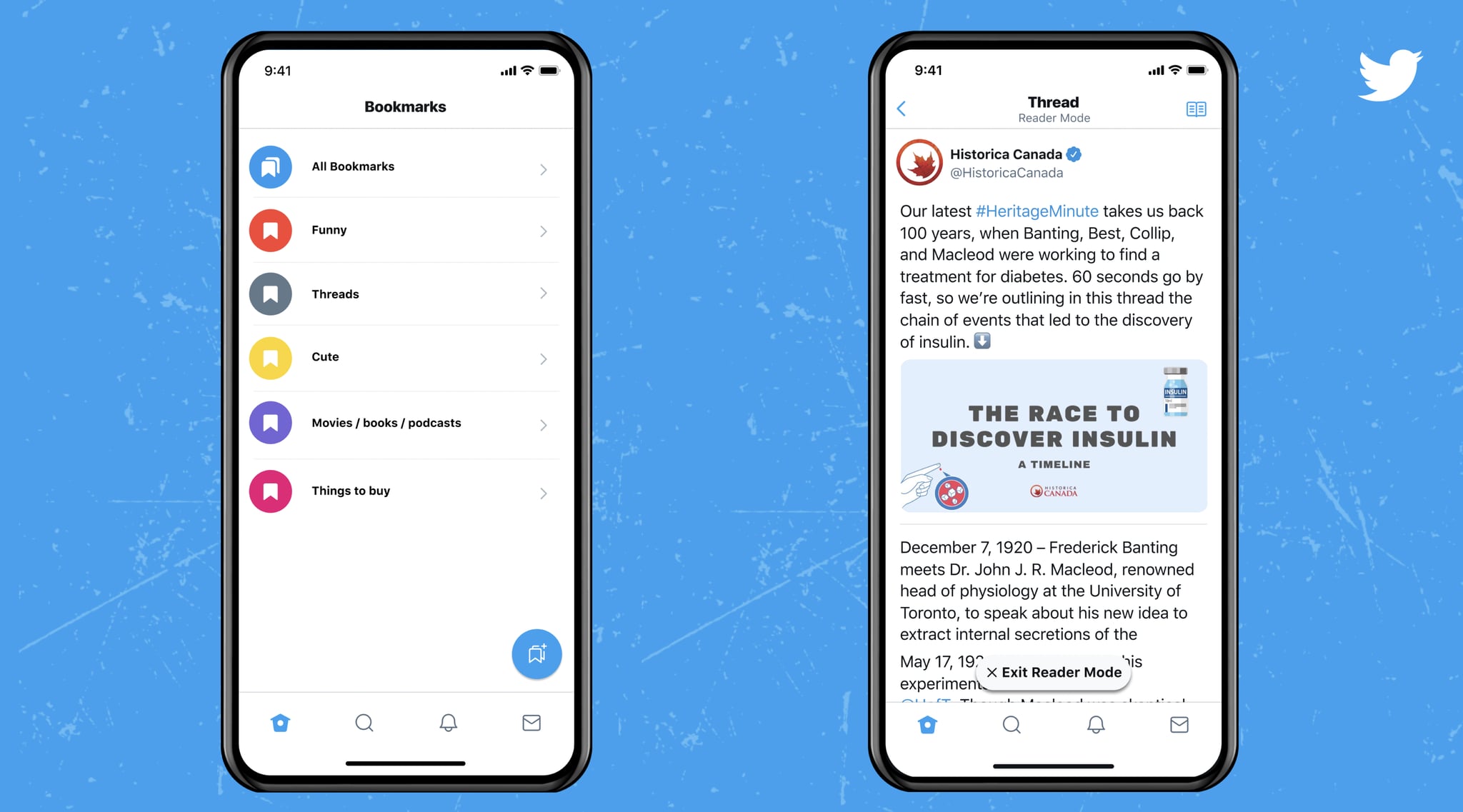 While Twitter is consistently assessing how to enhance the subscription further, the current Twitter Blue features center on creating a more user-friendly Twitter experience. The most talked-about Twitter Blue feature is the ability to undo tweets, which essentially stops a tweet mid-send so it never fully uploads (not unlike the "undo send" function in Gmail). Twitter Blue subscribers will also have the ability to organize their favorite tweets into custom folders, so you can easily find what you need without scrolling through a million favorited tweets. They also have access to a "Top Articles" section that aggregates the most-shared articles within your community. Additionally, with a Twitter Blue subscription, you can customize your navigation bar to include only the features and pages you actively use, and you can adjust the colors and themes of the app and the Twitter icon if that's something important to you.

Two other Twitter Blue features worth calling out are ad-free reading and Reader Mode. When subscribers come across articles from participating publishers, they'll notice text that says "Ad-free with Twitter Blue," signaling you can peruse the article without being bombarded with advertisements and pop-ups. Not to mention, a portion of Twitter Blue proceeds will go to those publishers, according to The Verge. With Reader Mode, Twitter Blue users can enjoy a less-clunky experience when it comes to reading things like lengthy Twitter threads. Instead of sifting through various tweets and replies, Reader Mode pulls the appropriate info into a single page.

Undoing tweets with Twitter Blue is about as straightforward as it gets. When you go to send a tweet, you'll see a loading circle next to the text "Sending tweet," along with two buttons: "Send Now" and "Undo." The Send Now button will immediately push the tweet live, while the Undo button will stop the send, assuming you press it before the tweet fully loads. The default send time is 30 seconds, but you have the option to choose a shorter time. Sadly, there's still not yet an option to edit tweets that are already live, so if it does fully upload, you'll just have to delete the tweet and repost it as you normally would.

A Twitter Blue subscription costs $2.99 per month for US users.

On your desktop, simple click the "More" icon on the lefthand Twitter menu, and then, click "Twitter Blue." You should see a small pop-up briefly detailing the exclusive Twitter Blue features, along with the option to subscribe. Clicking the subscribe button will take you to a checkout page where you can complete your purchase. Keep in mind that you'll be charged for Twitter Blue monthly and automatically, so you'll want to make a note to manually cancel your subscription if you no longer want it. Once you check out, your Twitter account will reload with the new Twitter Blue functionalities.

On the mobile app, you can sign up for Twitter Blue by clicking on your profile image in the top left corner of your screen and selecting "Twitter Blue" from the menu. From there, just follow the prompts to purchase your subscription.

Because Twitter Blue is relatively new, the app is always testing new features and capabilities. Twitter Blue Labs offers subscribers the opportunity to test out those unreleased features. However, Labs isn't available in the US just yet, and is currently only offered to Twitter Blue users in Canada and Australia.

Yes, regular Twitter is still completely free, and the company has no plans to change that any time soon. Twitter Blue is simply available to those Twitter aficionados who prefer a more customized, streamlined app experience.

Related:
Here's How to Do That iPhone Photo-Editing Hack That's All Over TikTok
Image Source: Courtesy of Twitter
Tech TipsTech NewsDigital LifeTwitterTechnology