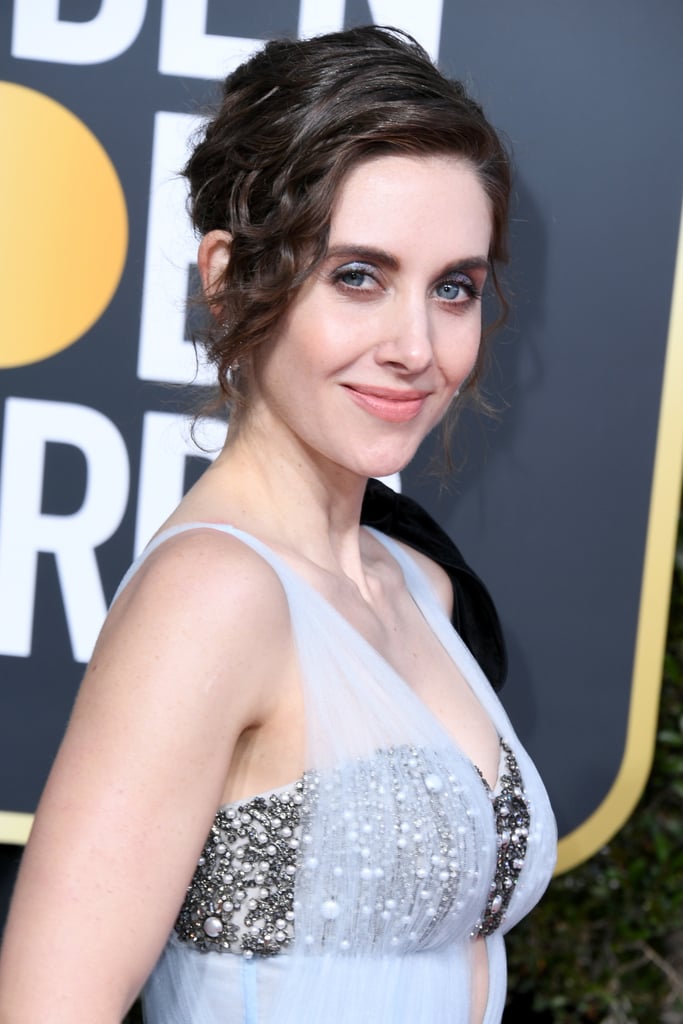 For the 2019 Golden Globes, Alison Brie traded in her '80s curls for swept-up loose waves. The Glow actress arrived at the awards show with her hair pinned up into an undone french twist, which she told POPSUGAR was on purpose. "I get a perm every season for Glow and then it's teased to death when we're shooting and I'm playing Zoya the Destroya," she said.

That's why she kicked off the night with the Nexxus Vital 8-in-1 Mask ($4), a protein and coconut oil-packed hair treatment that hydrates and repairs damage that might come from a perm (she's a sponsor for the brand). Then, instead of opting for a sleeker, straight hairdo, she actually worked her permed curls into her look. Her hairstylist Bobby Eliot blow-dried her hair without a brush to enhance the hair's texture.

"We put my hair up, and we're using some of that curly texture for the bangs," Brie said. "I have a lot of layers on the show, and it looks very '80s when it's just down on its own, so we've just gathered the longer layers and put them up and swept my bangs out of my face but kept my texture in it. You can still see some of the waves throughout."

See more images of Brie making waves on the red carpet, ahead.

Beauty Tips
I Tried the TikTok French Manicure Stamp Hack, and OMG, It Actually Is as Easy as It Looks
by Jessica Harrington 16 hours ago

Beauty Trends
Megan Fox Is Proof: "Liquid Hair" Will Be the Hottest Trend to Try This Fall
by Danielle Jackson 18 hours ago