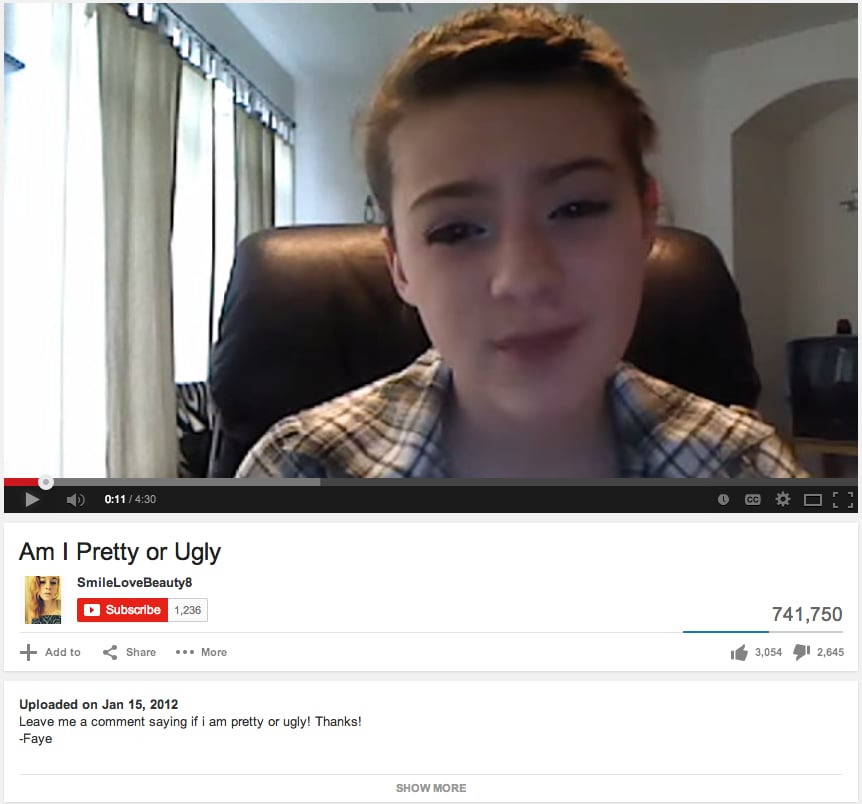 "She's like Carrie Underwood, but not pretty." "What's up with this chick's eyes?" "Who names their kid Kirbie?" It was two and a half years ago when I started my job as POPSUGAR Beauty's video host. And as I read the Internet's first reaction to my on-camera presence, I felt like I was being bullied in middle school. I had always wanted to be on-camera, so I was so thrilled to start this adventure. But after my first video went up, I went from excited and confident to disappointed and insecure.

Everything I loved about myself — and the parts I didn't — were suddenly being dissected by ruthless, anonymous strangers. They judged me on things that I couldn't change — or perhaps didn't want to change. For instance, I had eye surgery as a child to remedy ptosis, a condition that impaired my vision and gave me droopy, almost sleepy-esque eyelids. And my mom spent a long time picking out my name! (Now I know how she felt when at 8 years old I wanted a new one.)

My job is based around being on camera. Whether it's demonstrating how to properly apply foundation, interviewing A-listers like Sofia Vergara, or turning myself into a zombie-fied Taylor Swift, everything I do from 9 to 5 is broadcast for the world to see. Some argue that by putting myself out there, I am subjecting myself to scrutiny. "You ask for it," they say. Celebrities deal with this on a daily basis. In fact, when I posted about Taylor Swift this week, comments included: "I don't like her face," and "Have a friend who had met her and been at a birthday party with her. She said she's a very dull person and very boring. I do like her music though." Is it justified to judge someone after a 10-minute interaction?

That's why when I read about the young girls who are asking people on the Internet "Am I pretty?", it not only broke my heart, but it also scared me. If you search YouTube with the phrase "Am I ugly or pretty?", you'll find videos that have garnered 700,000-plus views with 14,000 comments. The one I watched shows Faye, a middle schooler, who pleaded with the world to tell her, truthfully, if they find her to be ugly or pretty. Most of the comments are jaw dropping, vicious, and degrading.

These girls are in their formative years, a time that can be awkward and emotional. Plus, The Daily Mail reports that one-fifth of girls as young as 12 refuse to leave the house without full makeup. It's no secret that today's youth feels the pressure of society to look beautiful — it's literally painted on their faces.

As someone who receives this type of scrutiny without asking for it, I have to wonder what's appealing about soliciting judgment. And I'm a grown woman! (Beyoncé voice.)

Fact is, we live in a social-media-driven society, and I wouldn't be opposed to putting an age limit on using these platforms. My teenage life existed when Facebook, Twitter, Instagram, and YouTube didn't exist. (Praise be.) Sure, my peers and I had some unfriendly incidents on AIM (AOL Instant Messenger). But I didn't have to deal with the anonymous, malicious commenters, who endure zero consequences. The concept of bullying isn't new, but when I was growing up, there were fewer mediums to do it.

Here's the thing: when you judge someone based on their looks, you're judging them on something that's 100 percent subjective. Beauty means something different to everyone. Yet these young girls are soliciting self-esteem from strangers, which makes them vulnerable targets. They're getting responses from the bored teens; the people who are hurting and want them to feel pain, too; the girls who are jealous and want to "bite back" anonymously; and the Internet trolls who live to bring people down. Even if most comments are positive, negative feedback is often heard louder — especially for teens.

I know some of you are thinking, "Doesn't your job focus on the superficial? Aren't you the one telling us what makeup to wear to look better?" For me, it's not about looking better. It's about feeling good. I love makeup! It's a creative outlet for me to apply a winged eyeliner tip, braid my hair, or paint my nails.

It also helps to think about those who motivate you. Because I'm in the entertainment industry, I channel some of the most polarizing women in the business: Oprah Winfrey, Ellen DeGeneres, Beyoncé, Katy Perry, Taylor Swift. Those last three are the top recording artists in the world with legions of fans, yet they also receive the most criticism. And they're women who are successful by most standards, and, if you want to boil down to it, pretty. (At least, they are in my eyes!) Take a gander at their YouTube pages, and you'll see how many haters comment on their videos. (Yes, I just used "haters" for the first time since 2002.)

If I can offer you anything, it would be this: Don't put yourself through this torture. Don't look to other people to validate how you feel about yourself. And in the words of my new favorite song of the moment (and because three references is a charm), shake it off.