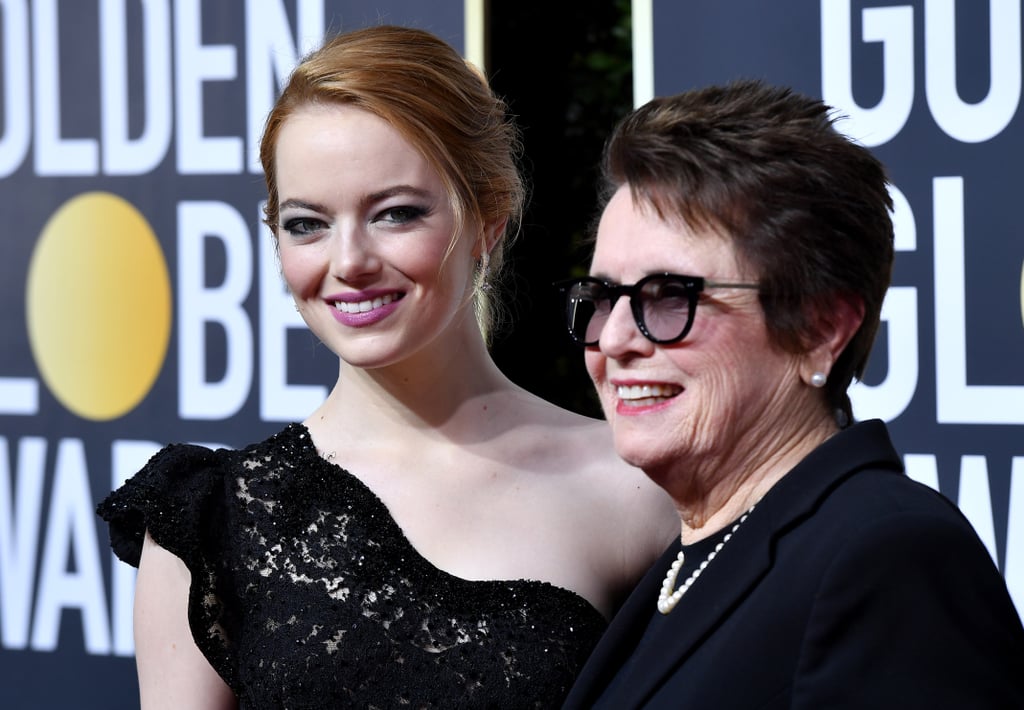 In case you missed it, feminism took center stage at the 2018 Golden Globes, as both female and male celebrities wore all-black outfits to protest against gender inequality and sexual harassment in the industry. But for Emma Stone, it went deeper than just slipping into a black Louis Vuitton gown for the evening. The Battle of the Sexes actress, who walked the red carpet with former tennis player Billie Jean King, incorporated feminist undertones into her makeup choices, too.

Makeup artist Rachel Goodwin garnered inspiration from the Women's Suffrage Movement of the late 1800s and early 1900s when deciding which Nars products would pair well with Emma's dress. "I found these incredible banners, sashes, pins, and jewelry that women of the Suffragist Movement worn, and they all had these three colors — green, purple, white — and those were the Suffragist colors," she said, according to Allure.

"In their literature, purple was a royal color that stood for the royal blood that flowed through the veins of every Suffragette, their instinct for freedom and dignity, white stood for purity in public and private life, and green was the color hope, and that's why they chose those colors," Rachel continued.

On Emma's eyes, Rachel used the emerald-green Heartbreaker shade from the Nars Glass Tears Eyeshadow Palette ($49). To incorporate the color white, she applied a shimmery white shadow on the inner corners of the star's eyes, along her cheekbones, and right under her eyebrows. The finishing touch? She smeared the Nars Audacious Lipstick ($34) in the Dominique shade — a lovely lavender hue — on her lips and dabbed a bit on her cheeks as well.

Ahead, zoom in on Emma's patriarchy-smashing beauty look in all its glory, and then check out the rest of our favorite beauty looks from the history-making evening.