After a short hiatus, Kylie Cosmetics dropped new products just in time for the holidays. But some fans aren't feeling Kylie's Christmas spirit. In a move that was bound to draw some controversy, Kylie Cosmetics' final release of its Silver Series (after 20 new bullet lipsticks and a range of 30 concealers) is a $360 brush roll.

Yup, that's a three-figure price tag on the entire line of 16 metallic brushes. While it's possible to purchase single brushes from the lineup (individual prices range from $16 to $48), viral sticker shock ensued.

Since Kylie herself has a $420 million cosmetics empire (work it, girl), it's safe to say she can afford pricey tools. However, many of her customers cannot. As one person commented on the Instagram announcement of the launch, "Not everyone is sitting on a ton of money to be able to drop $360 on some brushes." According to another, "My first car cost less than this brush set." Um, where is that dealership located? The year 1973?

Consumers weren't the only ones throwing shade: one cult-favorite brand decided to speak up. Just after Kylie debuted the roll, BH Cosmetics, purveyors of the gorgeous $20 Zodiac Palette that jumped to the top of our Christmas lists when it was released last month, let the world know that it sells another option.

Related:
13 Products From BH Cosmetics That Every Beauty Junkie Should Own — All Under $20

Just leaving this here in case anyone wants a silver metalized brush set, but also wants to pay a few bills this month... it’s $16.99 and the reviews are lit!😘❤️✨ In fact, have a peek at ALL our brush sets here: https://t.co/zdpNJTXBre pic.twitter.com/9BTlK3NZrI

"Just leaving this here in case anyone wants a silver metalized brush set, but also wants to pay a few bills this month," the brand wrote on Twitter, linking to its Smoke n' Mirrors Brush Set ($16, originally $25). Not all heroes wear capes, y'all.

BH saw their opportunity and took it loooool

So: if you choose to buy one, two, or all 16 of Kylie's brushes when the line drops on Dec. 13, do you. That's what Christmas bonuses are for! (Right?) But if you can't afford to drop such coin, BH has got you. We bet you'll look fabulous however you choose to draw a smoky eye.

Related:
25 Beauty Gifts That Look More Expensive Than They Are, Because We Gotchu 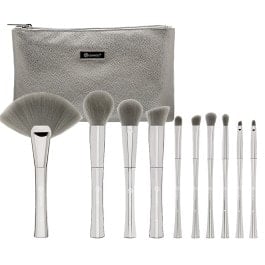