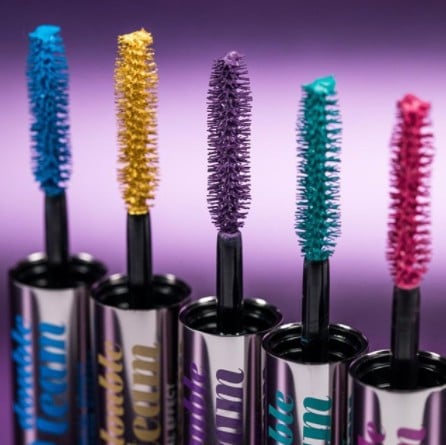 Is multicolored mascara considered business casual? That's something you might want to Google (@Linkedin, help a girl out!), because Urban Decay will launch a gaggle of vibrant, crayon-hued mascara that you're going to want to wear every damn day. The brand just announced that it will drop five shades of the brand new Double Team Colored Mascara come March, and suddenly that month can't come soon enough.

Urban Decay founder Wende Zomnir gave up the scoop in an Instagram post detailing the lash-enhancer's multiple features. As she wrote, "One side [of the mascara] has a cream shade, and the other a coordinating shimmer shade. Dimensional!" Wende also wrote that she loves swiping it over her brows for a rainbow effect.

The electric hues are giving us major flashbacks to the 1980s. Gonzo is a midnight blue, Deep End is a mermaid's tail sea green, and Junkshow is a pop of bright fuchsia. Of course, since purple is basically the team mascot for Urban Decay, that particular shade is represented in the plum-colored Vice. There is also a dual option, Dime/Goldmine, which holds a silver on one end and gold on the other. Read on to see each one in action!