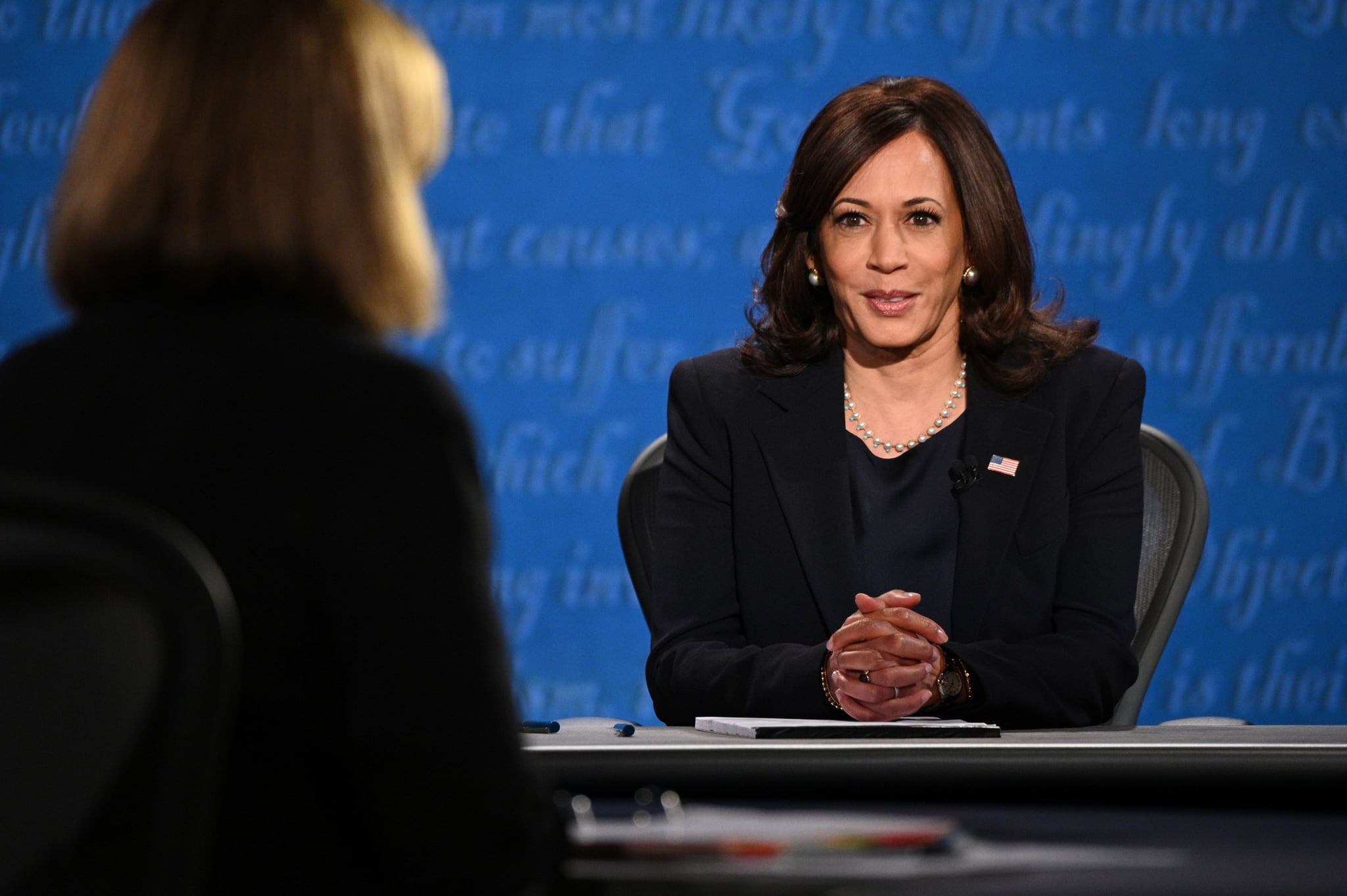 "If your hair is relaxed, white people are relaxed," comedian Paul Mooney said in Chris Rock's 2009 documentary, Good Hair. "If your hair is nappy, they're not happy." Although the movie is more than a decade old, the same sentiments often still apply today. Black women are unfairly judged under a microscope for their grooming choices, especially in the workplace — and nothing is more evident of this fact than the treatment of Black women in politics.

When 11-year-old Malia Obama wore her hair in twists while in Rome in the summer of 2009, critics deemed her "unfit to represent America for stepping out unstraightened." Kamala Harris was accused of wearing a wig when she appeared with bouncy, straight hair at the vice presidential debate last month. Prior to Ayanna Pressley's alopecia, the US representative for Massachusetts was advised against wearing her Senegalese twists when she was running for office. People told her they weren't polished enough and appeared too ethnic and too urban. When political strategist Meredith Lilly recalled the reason a few of her non-Black colleagues didn't vote for a Black woman candidate years ago, she told POPSUGAR: "They couldn't vote for this particular person because [their hair] reminded them of a Black criminal."

This all points to the harsh reality that Black politicians with twists and braids face harsh judgment as these hairstyles are seen as unprofessional or threatening. Unfortunately, the policing of Black hair is not isolated or new. Although their sustained work within race, gender, and class oppression is well-known, Black women's hair often leads the conversation.

As a Black woman, I enjoy changing my hair often. I like to experiment with braids and short haircuts. As a Black fashion editor, I've experienced hair discrimination, but never on the scale as a Black woman in a high political role. In fact, Black women outside of politics have been known to change their hair more frequently, and in some industries, it's celebrated. Actresses like Tessa Thompson, Zendaya, and Issa Rae have given Black hair a platform with their many hair changes. Even Michelle Obama's hairstylist Johnny Wright told POPSUGAR earlier this year, "You have to give some play room for Black women, because Black women change their hair more frequently. It's more accepted and understood." It got me thinking: are Black women in politics afforded the same freedom with their hair as Black women everywhere else?

The short answer: no. Regardless of your policies and work ethic, working in an outfacing role like politics means adhering to a very conservative dress and style. "There is a pressure to look a certain way because, in politics, it's such an outward-facing job," Lilly said. "You're constantly being watched; you're on television, you're on everything." For Black women, these public roles can require the candidate to constantly work to gain the trust of the broader audience, which is often white. Black politicians are guided into creating a look that is both appeasing and effortless — one that shows they are hard working, but not pretentious; well-groomed, but not prissy.

For Black women in politics, the great attention toward their appearance lends itself to limited choices and vast scrutiny when it comes to their hair. The public — whether intentional or not — vet our hair, believing the work we might be able to accomplish is based solely on our hairstyle. "It's sad that in 2020, Black women have to choose between embracing who they are and running for office," Lilly said. It can be crippling and steer us away from pushing the envelop to combat the discrimination. 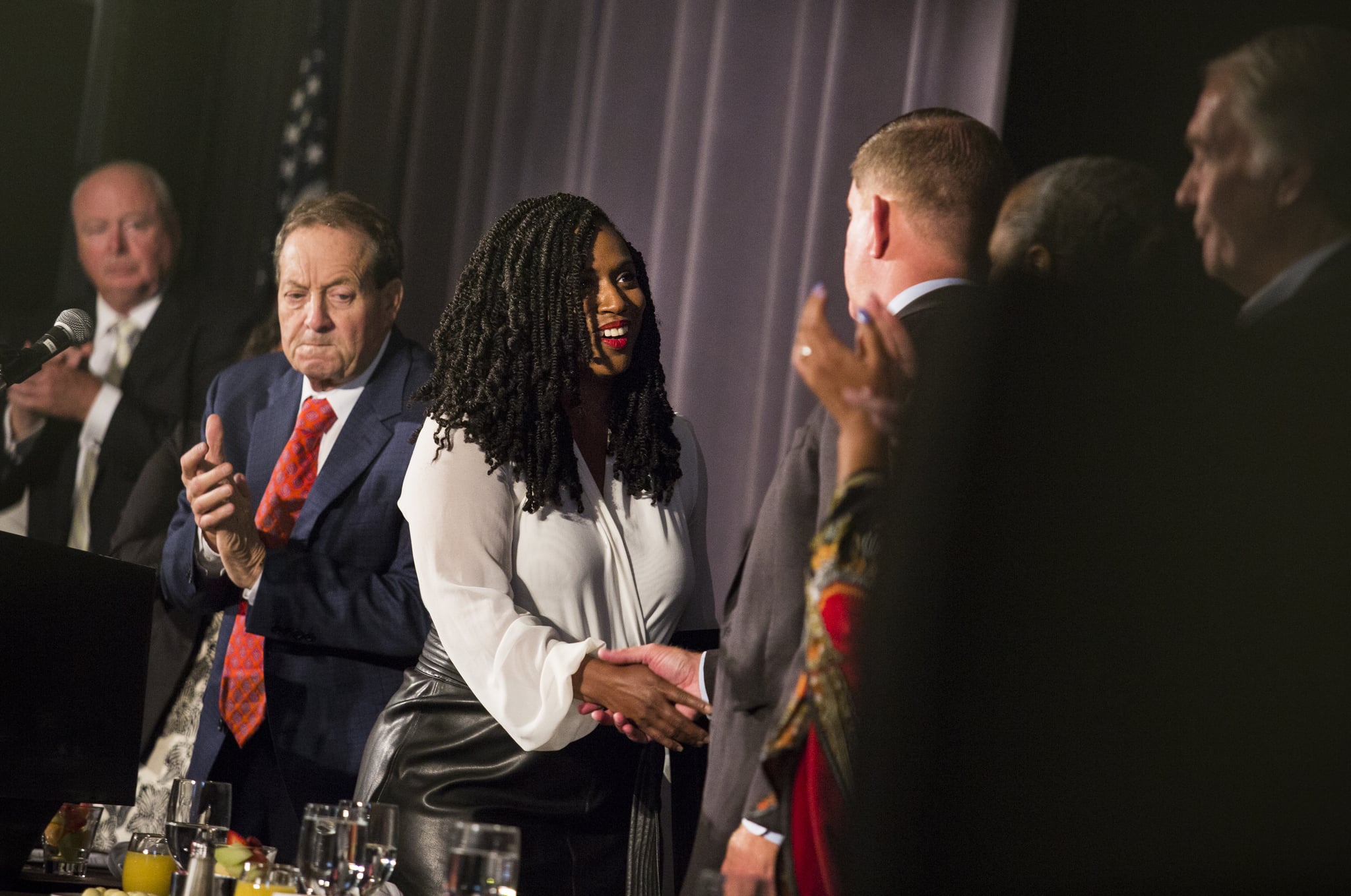 Wright once told POPSUGAR about the "recognizable silhouette" he created for the first lady when she was in the White House, one that people would remember and can easily identify with. For Obama, that often meant a short bob with layers. For Pressley, that means twists and braids. However, the issue with keeping to one style — and one style only — is that it pushes a narrative and pressure that you have to look a certain way to be successful or be reprimanded for taking a risk. There is a sense of attachment there.

"So many people have been verbal and vocal, and emotional, even, about what it means that I wear my hair in these twists."

The general public have never been afraid to voice their opinions on people's hair. Pressley has been such a champion of twists and braids that she often feels pressure to uphold this image. "So many people have been verbal and vocal, and emotional, even, about what it means that I wear my hair in these twists, and I don't want people to think anything about me has changed," she told The Root. This is an unfair weight placed on Black women to be locked into a hairstyle in fear they won't be deemed as professional enough or, worse, recognizable. There is an assumption that changing your hair could lead to getting trapped into wearing another one, regardless if you're ready to move on.

Ultimately, Black women politicians have to present an image that is comforting. Which really means, one that makes white people feel more comfortable around Blackness. Creating a unified hairstyle is one of the many ways they do this.

Anything Black women do is political — hair included. Although there is a pressure to stick to a recognizable hairstyle to keep your stature, I am optimistic the double standard will eventually collapse with women like Stacey Abrams, Karen Bass, Holly Mitchell, and Pressley, who sport natural hair and rock different styles. "We can win the highest office in Georgia without changing my hair, my gender, my race or my beliefs," Abrams tweeted in 2017. These Black women in roles of power are influencing the right to choose how they wear their hair and the freedom to experiment.

I look forward to the change the CROWN Act — the law that explicitly bans race-based discrimination — continues to bring. It's allowed Black women to legally wear their twists, locks, braids, or teeny-weeny Afros proudly. This, along with the racial reckoning this year with Black Lives Matter, has encouraged brands and organizations to feature more Black women in their natural element, reemphasizing the importance of choice in whatever hairstyle they choose.

This is a step in the right direction. My hope is that Black women politicians will be awarded the same opportunity to play around with their hairstyles as everyday Black women have had. They deserve to see the public celebrate their minds, policies, and determination instead of their hair choices.

by Taylor Andrews 10 minutes ago