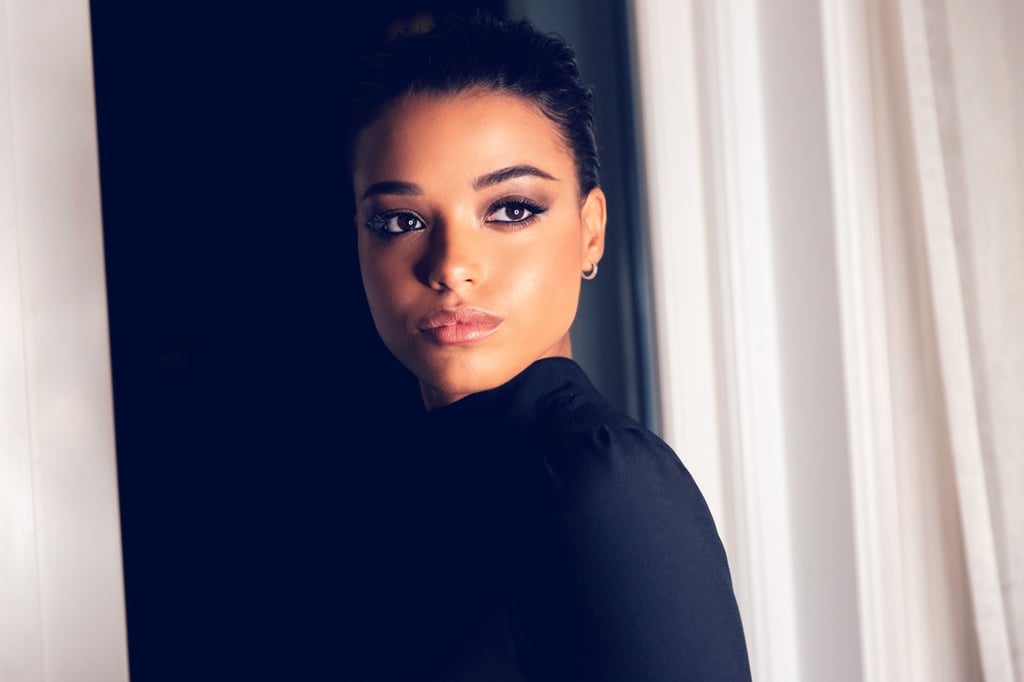 British actress Ella Balinska has had a major month. Charlie's Angels, her first big Hollywood film, hit theaters in the US; she graced the cover of last week's Evening Standard Magazine; and this week, she celebrated the movie's London premiere at the Curzon Mayfair. The British-born actress stunned in a custom Prada gown with a Cartier necklace dangling down her back (she is the face of the iconic jewelry brand). And while her mile-high slit certainly had our jaws on the floor, we were equally as surprised when her makeup artist, Vincent Oquendo, shared that he used three different sets of false lashes on Balinska for the occasion. Yes, you read that right, three.

Oquendo wanted to "play up Balinska's strong sexiness" for the evening, but also wanted to keep her makeup blended, feathery, and rich with texture. To do that, he started by blending a brown pencil all over her lids and lining her lashes in black. He then broke out the Maybelline New York Lemonade Craze Eye Shadow Palette ($10), dipping into all of the warm brown tones, and layered the Maybelline New York City Mini Palette in Rooftop Bronzes ($10) and the Shiseido Aura Dew in Solar ($25) on top. At the outer corners of Balinska's eyes, Oquendo used dark-brown liquid liner to draw on a "really sharp stiletto wing that was also very subtle and feathered; I wanted the lashes to be fluffy and I wanted the liner to be an extension of the lashes. I didn't want it to look like a liner look from straight on," he said. He then added a dab of Mehron Metallic Powder in Gold ($13) and Surratt Beauty Torche Lumière in D'Or ($54) to the inner corners of the eyes "so there were different levels of shine," he added.

Oquendo continued to layer when it came to the lashes, using three sets of false lashes on Balinska. First, he laid down the Ardell Baby Wispies False Lash Strips ($5), followed by House of Lash Le Petite Triple clusters ($7). Then, to complete the lash-focused look — which he described as "wispy and spaced out" — he added Ardell Accent Lashes in 301 ($1) to the outer corners only. Oquendo didn't stop there, either. To blend the false and natural lashes together, he coated them with Maybelline New York Lash Discovery ($7) followed by the Hourglass Cosmetics Realist Mascara ($36) over that.

For the lips, Oquendo used another inexpensive product, the Maybelline New York Color Sensational Vivid Hot Lacquer in Unreal ($7), which is one of his current red carpet go-tos. "It's a liquid lipstick that's kind of glossy. It has a shine, like a lip oil, but there's actual color behind it. I love lip oils but if you use one on a celebrity, by the time they get to the carpet, the oil is absorbed into their lips, and if you use a gloss, it just gets messy. The best way to describe this Maybelline one is a lip gloss married with a lip stain."

Before sending Balinska onto the red carpet, Oquendo covered any exposed skin with shimmery body lotion and snapped a few photos in her hotel room. Keep reading to see the behind-the-scenes snaps, as well as her epic eye look up close.