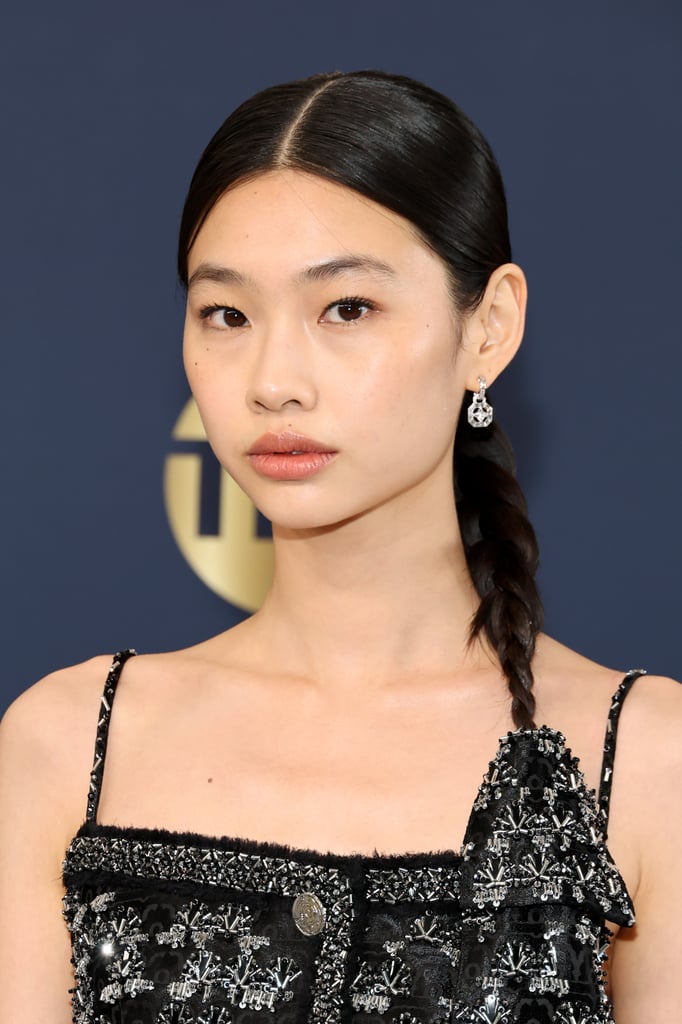 It took all of 10 seconds for us to fall in love with HoYeon's Louis Vuitton look at the 2022 SAG Awards on Sunday, but upon closer inspection, the "Squid Game" star's hidden hair accessory might be our true favorite moment of the night so far.

After making history as the first Korean TV and the first foreign-language series to be nominated for a SAG Award, the "Squid Game" cast arrived dressed to the nines on the red carpet. HoYeon, who took home the award for outstanding performance by a female actor in a drama series, walked along with her costars in a floor-length, button-up Louis Vuitton dress lined with silver buttons like an ornate trench coat. The gown, which featured a thigh-high slit and convenient, coat-like pockets on either side of her waist, was embellished in hundreds of cylindrical beads arranged in a floral pattern that extended straight into HoYeon's matching hairpiece.

The hair tie cascaded over HoYeon's shoulder from the tip of a single braid. Celebrity hairstylist Jenny Cho created the look using Hair Rituel by Sisley-Paris products and Ghd hot tools, and it perfectly tied together her ensemble from head to toe. HoYeon paired the look with silver jewelry that accentuated the sparkle on her dress; a pair of strappy, heeled sandals; and a black pedicure. Out of our price range? Almost definitely. But très chic? Absolutely.

"To hear the inspiration behind Hoyeon's dress from Louis Vuitton that showcased the traditional Korean embroidery work to the traditional hair tie (Daenggi)," Cho says in a press release. "I can't hide the fact that I was very emotional about how I got to be the one to style her hair into a modern version of the sleek traditional Korean braids and to put the Daenggi into Hoyeon's hair. It was sincerely one the most special glam moment to remember."

Get a look at HoYeon's chic Louis Vuitton outfit and her matching hair accessory from all angles ahead.