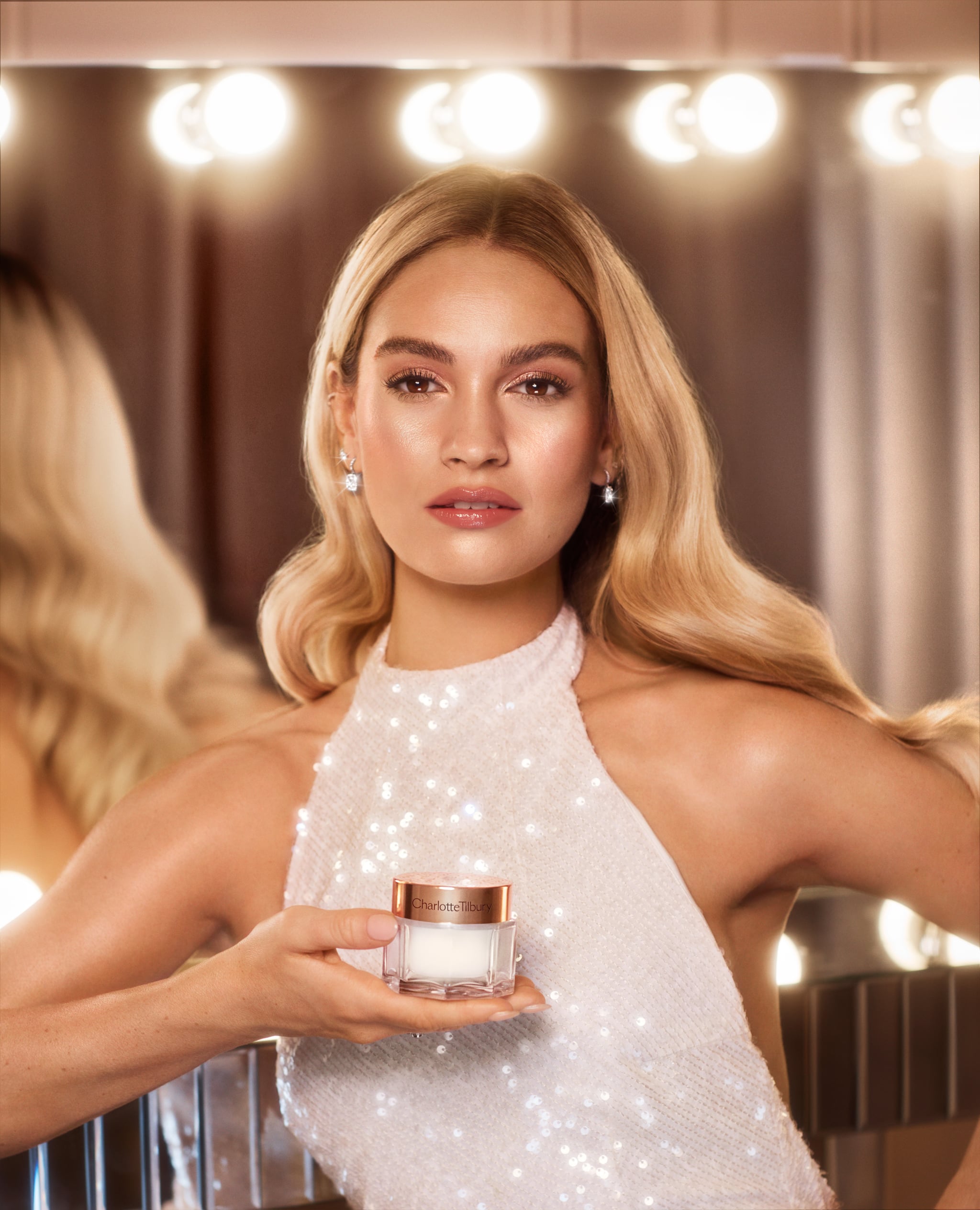 Lily James has been a beauty muse for fans thanks to her ever-changing hair colors and flawless makeup, so it's no surprise that she's the new face of Charlotte Tilbury's beloved Magic Cream. In a series of new campaign images released on Sept. 27, the actor embodies retro Hollywood glamour with her blond hair styled into vintage waves. To top it off, soft pink pouty lips and perfectly arched brows were masterfully applied by Tilbury's niece, Sofia Tilbury, using products from the brand. But perhaps most notable is James's radiant skin that oozes luxury. Wearing a white sequined halter-neck dress in one image and a champagne-colored silk blouse in the other, James proves she is seriously chic.

Following in the footsteps of "Bridgerton" actress Phoebe Dynevor (who was the brand's first-ever ambassador), the "Pam & Tommy" star publicly wears the brand on a regular basis and used Schwarzkopf-Tilbury as her makeup artist for the 2022 Emmy Awards red carpet in September 2022, and the Prince's Trust Global Gala in April 2022. Hints of James's partnership with the brand have been right under our noses for the past year, with her personal makeup artist Valeria Ferreira posting images of the star wearing exclusively Charlotte Tilbury products since December 2021 — and each of these posts were labelled as paid sponsored content. 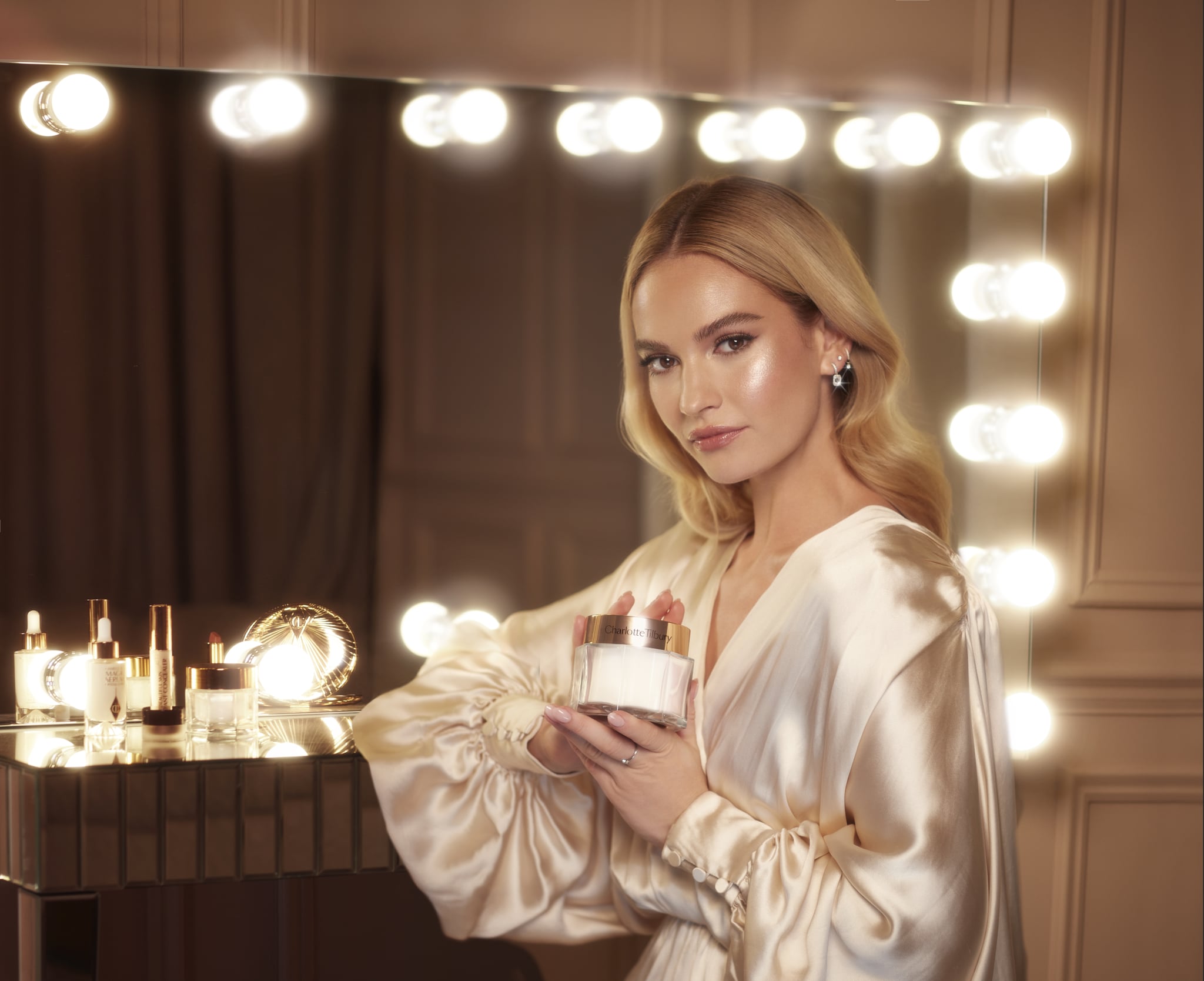 It can be hard to tell whether or not a celebrity actually uses a product that they're endorsing, but Charlotte Tilbury's Magic Cream ($100) is universally loved. The luxurious cream was the first skin-care product Tilbury ever created with the help of scientists. After hitting the market in the UK back in 2013, it quickly gained legendary status among beauty fans, celebrity makeup artists, models, beauty editors, social media stars, and pretty much anyone who tried it. It contains a unique cocktail of bionymph peptide, vitamins C and E, hyaluronic acid, rosehip oil, shea butter, aloe vera extract, frangipani extract, and camellia oil, which work hard to help firm skin and reduce the appearance of wrinkles. It's no wonder that James has been "obsessed" with the cream ever since Tilbury gave her her first jar.

As part of the campaign, she said, "I'm always on the go and when I have hectic days on set wearing heavy makeup and not getting much sleep, my skin really suffers. Being on camera is a huge part of my job and I have to look and feel my best. Charlotte's Magic Cream is the only moisturizer I can rely on to keep my skin feeling hydrated, plump and smooth – it gives me instant results and that famous red-carpet ready glow."

Charlotte Tilbury isn't the only brand the in-demand actress is collaborating with at the moment. She's the face of the Versace fall-winter 2022 campaign, in which we saw her rock a gothic look complete with bleached brows for the Versace Greca Goddess campaign back in July. Besides that, James has been busy filming "What's Love Got to Do with It?," a British rom-com also starring Emma Thompson that is due to be released in the UK in January 2023. In mid-September, James took a trip to Rome to shoot scenes for her upcoming film "Finalmente l'Alba." The film doesn't have a confirmed release date yet, but we can't wait to see James and her glowing skin on our screens again soon.

by Noelle Devoe 48 minutes ago

by Danielle Jackson 58 minutes ago