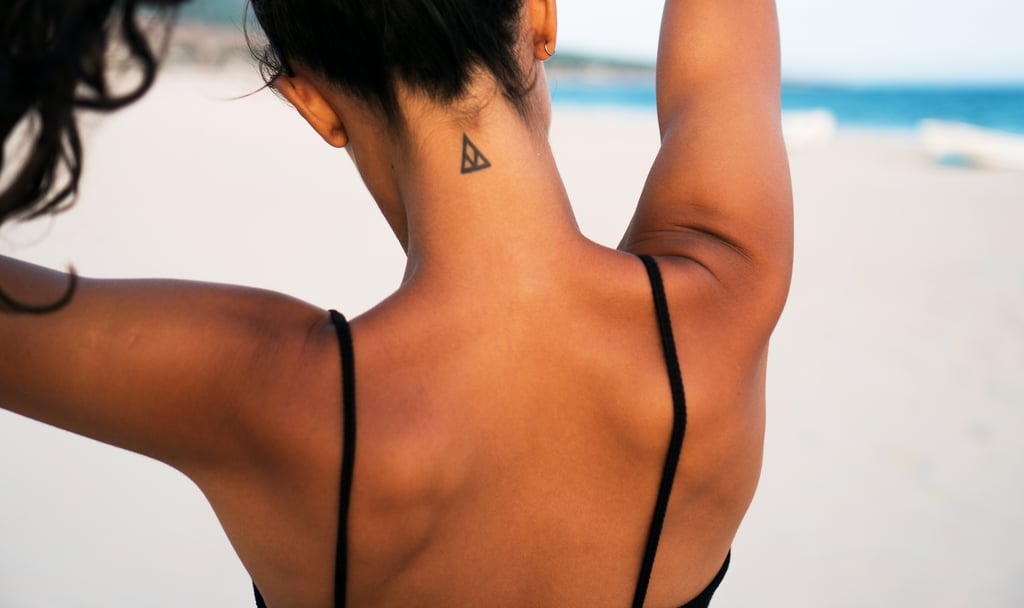 What to Consider Before Getting a Neck Tattoo, According to Tattoo Artists

Tattoos are a fun way to celebrate individuality and commemorate the moments and people that are most special to one. What was once considered a taboo form of teenage rebellion is now a method of self-expression, with at least three in every 10 Americans having a tattoo.

While the number of tattoo enthusiasts continues to rise, there are still some concerns about the types of tattoos that people feel they can get, as well as certain tattoo placements causing adverse effects like workplace discrimination. Many people are still under the impression that getting tattoos in hard-to-hide places, such as the neck, could be frowned upon. "I would first consider the possible restrictions and discrimination that heavily tattooed people face when thinking about a neck tattoo," Kandace Layne, owner of Magic Mirror Tattoo Studio, tells POPSUGAR. "With the neck, it can be tricky to cover with clothing or hair, depending on the placement and size of the tattoo(s)."

However, if a neck tattoo is on your to-do list, we asked Layne and Jazmin Paulino, tattoo artist at Fleur Noire Tattoo in Brooklyn, New York, everything you should know before and after getting one. Read ahead for details on everything from pain level to the best designs.

What to Consider Before Getting a Neck Tattoo

In addition to some neck tattoos being harder to hide, there are a few other things to take into consideration when before one. "Alongside possible employment discrimination, you may also be treated unkindly when traveling to some places where tattoos are extremely taboo or illegal," Layne says. "I consider getting a really visible tattoo in a place like the neck or on the hands a really big commitment, so be absolutely sure you are ready for that. I would also say to consider your pain tolerance, as neck tattoos can be a bit painful."

Paulino agrees, adding that neck tattoos can be pretty hard to miss: "Neck tattoos are like the equivalent of getting your hands or face tattooed, mostly because it's the first thing you see on a person. On top of the fact that the neck is very sensitive to get tattooed, people should consider the new lifestyle and attention that comes with this new addition to their body art."

How Painful Are Neck Tattoos?

Image Source: Jazmin Paulino
As with all tattoos, pain levels are subjective, but both Layne and Paulino agree that neck tattoos can be fairly painful. "From what I've been told and from seeing reactions when tattooing my clients, I believe neck tattoos are pretty painful," Paulino says. "On a scale from one to 10, I'd average out about a seven."

For people who are getting their first tattoos or are still relatively new to the process, the neck isn't one of the first places that Layne would recommend getting tattooed. "Though people typically get more excited about a piece the closer they get to finishing it, the hands, face, and neck are typically the last body parts I suggest a first-timer get tattooed," she says.

If you're looking to avoid the most sensitive areas of the neck, Layne and Paulino say that the most painful parts to get tattooed are typically the sides and back of the neck.

How to Avoid Fading for Neck Tattoos

One of the biggest drawbacks of any tattoo is fading (although Layne says that the neck is probably one of the safest areas from this pesky problem). "Fading is something that may naturally occur over time," Paulino says. "Things like sun exposure, aging, and lifestyle all play key factors into the appearance of your tattoo."

One of the easiest ways to ensure the longevity of your neck tattoo is to wear sunscreen. "Sunscreen whenever exposed to the sun, staying hydrated, and keeping your skin moisturized are key to avoiding your tattoo fading," Paulino says. "All things that are good for your skin normally, but are extra important when preserving your tattoo."

Layne and Paulino agree that people should have the freedom to choose whatever tattoos and placements make them happy. So, if you're ready for your own neck tattoo, take a look at the ones we've rounded up ahead to get some inspiration for your design.

by Izzie Deibe 38 minutes ago