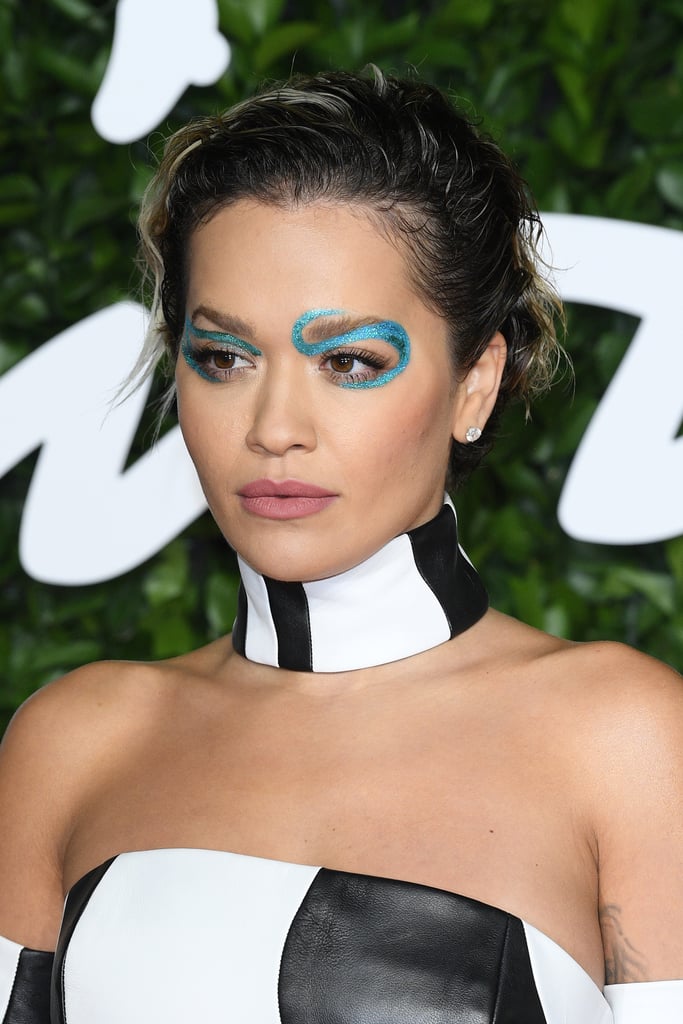 Rita Ora isn't afraid to experiment when it comes to hair and makeup. Need proof? She tried the mullet haircut trend back in August, and at the British Fashion Awards, she wore glittery blue eyeliner that snaked around her eyes that was definitely the most extra moment on the red carpet — and that's saying a lot.

To match her black-and-white, optical-illusion dress from 16Arlington, the singer wore mismatched, sparkly blue eyeliner that swirled around her lids, which were punctuated by a pair of fluffy false lashes. On her left eye, the liner started right below the middle of her bottom lashes, then curved up and around the ocular bone, travelled along her brow, and looped around the inner corner of her brow in a seamless swoop. Her right eye had a totally different feel with an overexaggerated, dovetail-shaped wing that encircled her entire eye and stretched out to her temple. Since the liner was so bright and sparkly, the rest of her face was kept simple with soft bronzey-pink blush on her cheeks and a rosy matte liquid lipstick.

Her hair was equally edgy with a wet-look faux pixie cut. The majority of her brunette hair was slicked back and hidden underneath the blond highlights that made up her shortest top layers, creating the illusion of a short, messy cut.

Ahead, get a closer look at her vibrant eye makeup from the night, and if you're looking for a festive party look that's a little more out there, this should give you plenty of inspiration.

Red Carpet
Wow, Yvonne Orji Is an Absolute Vision in This Marigold Ball Gown
by Shelcy Joseph 6 days ago

Timothée Chalamet
No, Timothée and Pauline Chalamet Aren't Twins, but These Snaps May Make You Think Otherwise
by Naledi Ushe 6 days ago

Taylor Swift
We Know Her Missing Scarf Is Red, but What Is Taylor Swift's Natural Hair Color?
by Brittany Sims 6 days ago