Bruce Jenner's revealing interview with Diane Sawyer stopped short of confirming whether he will get gender reassignment surgery. However, the former Olympian made his eventual plans clear in E!'s two-part special on his journey, Keeping Up With the Kardashians: About Bruce, which was filmed in February. In a clip from Sunday's episode, above, Bruce tells step-daughter Kim Kardashian that the surgery has been scheduled. His conversation about the same topic with daughter Kendall Jenner and step-daughter Khloé Kardashian is even more intense, with Khloé flat-out asking him, "Are you planning on not being Bruce anytime soon?"

Bruce offered further insight in the final episode on Monday, saying he will wait to undergo gender reassignment surgery until he completes further plastic surgery on his face. "Oh, the little thing down there?" he said with a smile. "That's kind of the last thing you can do. You can do an awful lot before that." As Bruce shares intimate details about his transition into a woman, his family has been nothing short of supportive on social media, posting sweet tweets and Instagrams. Read on to see the special tributes, and don't miss one of the cutest moments from Bruce's special. 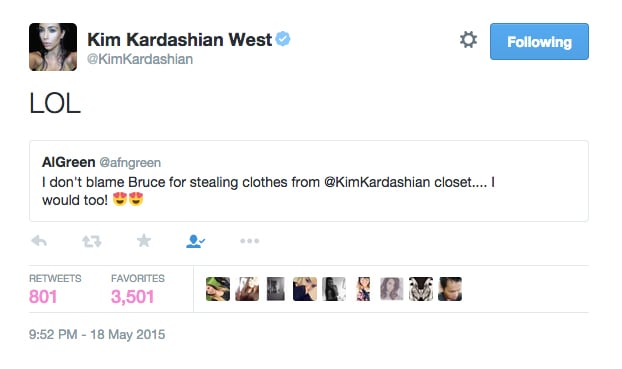 Dwyane Wade
Dwyane Wade Shows Off His Fiery Red Hair With Daughter Zaya, and Damn, They Own This Look
by Karenna Meredith 22 hours ago