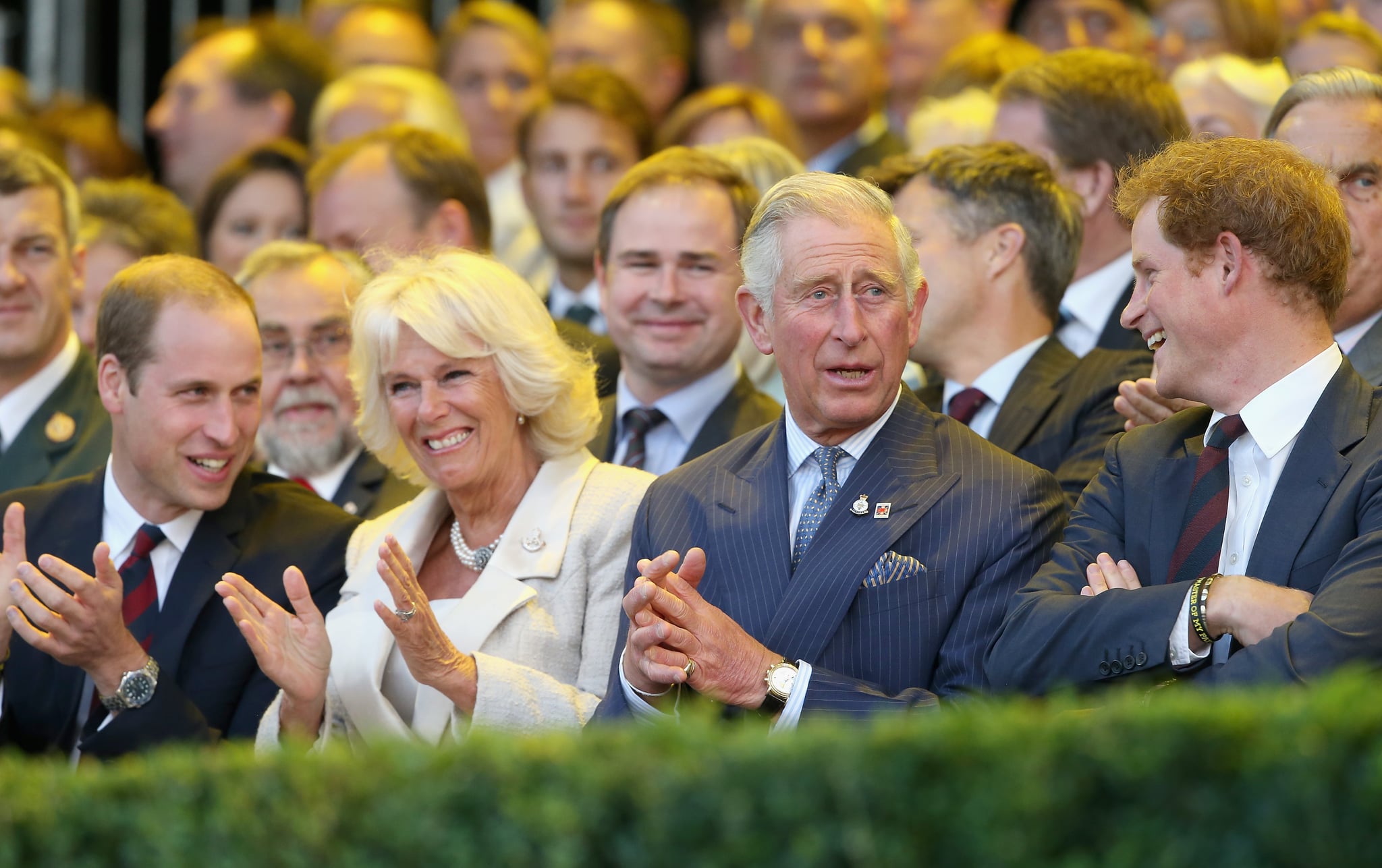 Camilla, Duchess of Cornwall rang in her 70th birthday on July 17, so what better time to look at one of the most important relationships in her life? The connection that she has with her two high-profile stepsons, Prince William and Prince Harry, is one that has evolved from some very dark times into something that those around them likely doubted they would ever see. By the time William and Harry were born, their father, Prince Charles, had not only long ago ended his relationship with Camilla, but he didn't see her socially as a friend, either. Charles and Camilla had been romantically involved in their early 20s, but Charles's naval career took him away to sea, and he ended the relationship. Camilla married her ex-boyfriend Andrew Parker-Bowles, and Charles wrote to his godfather, "I suppose the feeling of emptiness will pass eventually."

Related:
The Way Prince Charles and Camilla Met Was Pretty Common — With a Twist

The pair initially remained friends and lived near each other. The Parker-Bowles were regular visitors to Charles's country home Highgrove, and Charles was made godfather to their son Tom. When Charles and Diana got engaged, he stopped seeing Camilla socially, and so William and Harry never met her as young boys — but they certainly heard about her. When Charles and Diana's marriage broke down and they both sought affection elsewhere, Diana made her feelings about Camilla clear to her sons and so followed years of William and Harry's anger toward the woman Diana called "Charles's lady."

Charles and Diana separated in 1992, and after five years, he made moves to introduce his sons to the woman he hoped would one day be his wife. In the Summer of 1997, Charles sat down with William and Harry, explained a little about their relationship, and broached the subject of them all meeting — but William especially was resistant, and Charles knew it would be best to leave it for the time being.

"Diana made her feelings about Camilla clear to her sons and so followed years of William and Harry's anger towards the woman Diana called 'Charles's lady.'

Diana died two months later, which naturally meant for Charles that it was all about supporting his sons. Over the next year, Charles and Camilla kept their relationship low-key; it was easier to work on building the relationship between Camilla and the queen.

Over time, the princes could see that Camilla made their father happy. At the age of 16, William took charge of the inevitable and finally instigated a meeting in June 1998 at the London residence he and Harry lived at with their father, York House at St James's Palace. They spoke on their own for half an hour, and it was reported that it went well, but that afterward, Camilla came out and said "I need a drink." They went on to meet for lunch and afternoon tea soon after and continued getting to know each other. Harry's first meeting with Camilla was more straightforward and came a couple of weeks later, over tea at Highgrove along with her children, Tom and Laura.

Over the next seven years, the relationship between Camilla, William, and Harry was built very slowly. When the boys organized a 50th birthday party for Charles in November 1998, they invited Camilla to sit with Charles, although their relationship at that point was still very tentative. Camilla started to stay over at York House when William and Harry were in town, but when they were all at Highgrove together, she would drive back to her own house nearby after dinner, out of respect for the fact that it used to be Diana's house, too.

Related:
20 Photos That Show How William and Harry Have Embraced Camilla as Their Stepmom

By the time Charles and Camilla married in 2005, things were significantly better between the two boys and Camilla. Shortly afterward, Harry said in an interview, "She's a wonderful woman, and she's made our father very, very happy, which is the most important thing. William and I love her to bits." A further 12 years on from the wedding, and the brothers have now developed a warm, respectful, and loving relationship with their stepmother. It's telling that Camilla's granddaughter Eliza Lopes was a bridesmaid at William and Kate's wedding, and Harry even brought along a toy for her to play with. Camilla and Kate are also close. When Kate got married, Camilla gave her a special bracelet inscribed with both of their initials and has been best-placed to guide her through the ups and downs of marrying into one of the most famous families in the world.

Celebrity Couples
A Look at Chrishell Stause's Relationship History: From Matthew Morrison to Justin Hartley
by Monica Sisavat 12 hours ago

Justin Hartley
Prior to Meeting Chrishell Stause, Justin Hartley Was Married Once Before
by Monica Sisavat 1 day ago

Celebrity Couples
Who Has Brandon Flynn Dated? A History of His Rumored and Confirmed Romances
by Monica Sisavat 18 hours ago

The Royals
Their School Is Reopening, but Homeschooling May Continue For George and Charlotte
by Kelsey Garcia 18 hours ago

Celebrity Couples
Who Has Machine Gun Kelly Dated? Read Up on the Rapper's Quiet Romantic History
by Brea Cubit 1 week ago