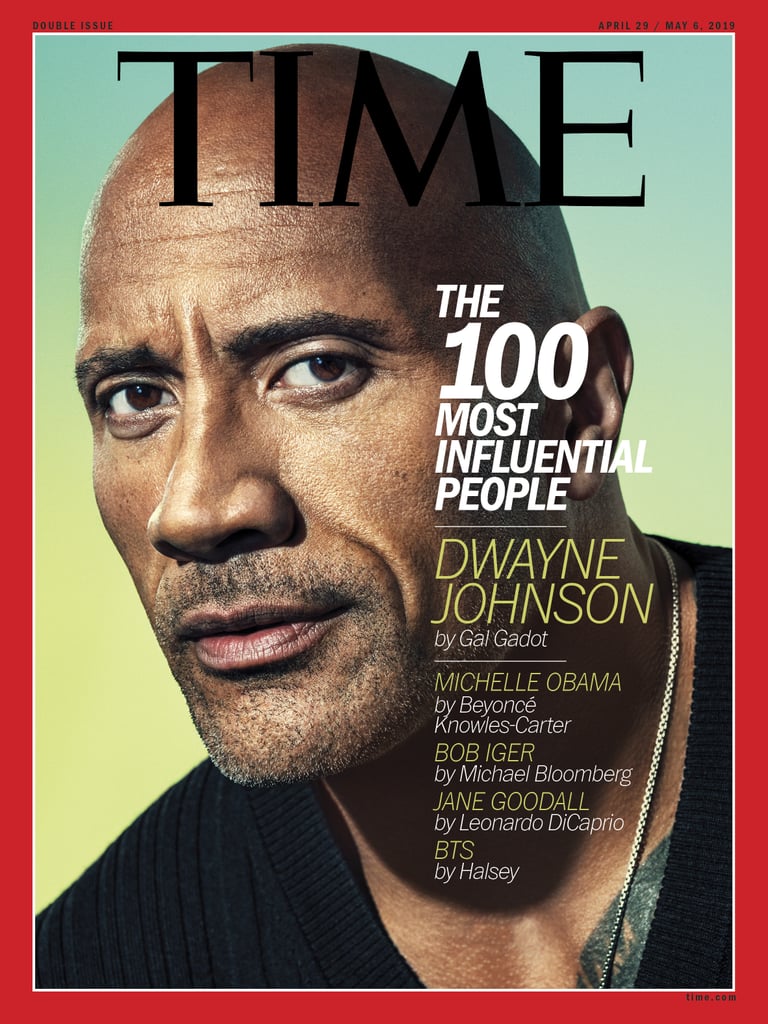 Dwayne Johnson was named one of Time's most influential people this year, and the honor is beyond well-deserved. I've been following Dwayne since he was kicking candy asses and laying the smackdown as The Rock on WWE, and not only is he one of the hardest-working — and richest — stars in Hollywood, but what I love most about him is that he's always remained true to who he is and has never shied away from his humble beginnings. In addition to gracing one of the six Time covers (Taylor Swift, Nancy Pelosi, Sandra Oh, Gayle King, and Mohamed Salah are featured on the others), Dwayne opened up in an interview about how his father shaped his wrestling career, and pal Gal Gadot penned an insightful essay that speaks volumes about the type of man Dwayne truly is.

"There is no one in Hollywood quite like Dwayne Johnson, and certainly very few who are as busy. If you have had the pleasure to work with him, as I have on the Fast and Furious films, you know that he is full of heart and creates an environment on set filled with warmth and positivity," his Red Notice costar wrote. "Dwayne is someone who believes the sky is the limit and will go above and beyond to make sure he gives 100% every single day, whether he is at the gym, working with his charity (the Dwayne Johnson Rock Foundation), being with his family and friends, or working on a new project."

"Dwayne is someone who believes the sky is the limit."

Naturally, Dwayne thanked his fans for the incredible honor on Instagram on Wednesday. "I'm boundlessly humbled and honored to grace the cover of @TIME," he wrote. "I've been quite the lucky man over the decades to have such a successful career, but it's only due to the deep connection I have with the fans, the audience - the people. To have success at something is one thing, but to have global positive influence on people's lives is the greatest and most powerful strength one could ever have. Thank you Time magazine for this exceptional honor. And most importantly, thank you to my one and only boss - the people."

He also shared an important reminder that we all need to hear: "It's nice to be important, but it's more important to be nice."

Dwayne may have had quite the busy year in 2018, but he's showing no signs of slowing down. The actor is currently in the midst of shooting Jumanji 3 and will be hitting the road soon to promote Hobbs and Shaw, which hits theaters later this Summer. On top of that, he's also launching his own tequila brand. Yep, this honor is way overdue. Congrats, Dwayne!

Related:
Dwayne Johnson Sequin Pillows Are Here — Don't @ Me, but I Kind of Want Them All
Previous Next Start Slideshow
Gal GadotDwayne JohnsonCelebrity InterviewsCelebrity QuotesTime