A privilege to talk to Prime Minister Justin Trudeau today about gender equality and the importance of bringing young people into politics. #Goal5 HeForShe One Young World

Emma Watson sat down with Canadian Prime Minister Justin Trudeau in Ottawa on Wednesday for what we can only imagine was the most charming conversation in history. The Beauty and the Beast actress, UN women's ambassador, and noted feminist visited Canadian Parliament to discuss gender equality, and it looks like she got along quite well with the PM. Along with an adorable photo of them laughing, she wrote on Facebook, "A privilege to talk to Prime Minister Justin Trudeau today about gender equality and the importance of bringing young people into politics." What we really want to know is, did she comfort Justin about being burned by Prince George? Or try to recruit him for her book club? Was a Tina Turner song playing in the background while they spoke?

Although we might never get the answers to those important questions, Justin had nothing but glowing things to say about Emma during the press conference that followed their meeting. "It's great to be able to welcome Emma Watson to parliament to talk about the important advocacy work she's been doing for a number of years now," he said. "The HeForShe campaign has had an extraordinary impact around the world making men champions of women's issues that are everyone's issues. Her voice is extremely important in making people realize how important this is." The actress similarly praised Justin's work in establishing gender parity in his cabinet, saying, "It's been such an exciting visit for me to come and visit your Parliament. It's so inspiring that you made your cabinet 50/50." Move over, Prince Harry. It looks like the much-loved prime minister has a new best friend. 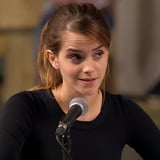 Late Night With Seth Meyers
Timothée Chalamet Got Starstruck Meeting Emma Watson: "It Was a Weird Moment"
by Angela Law 11/01/19