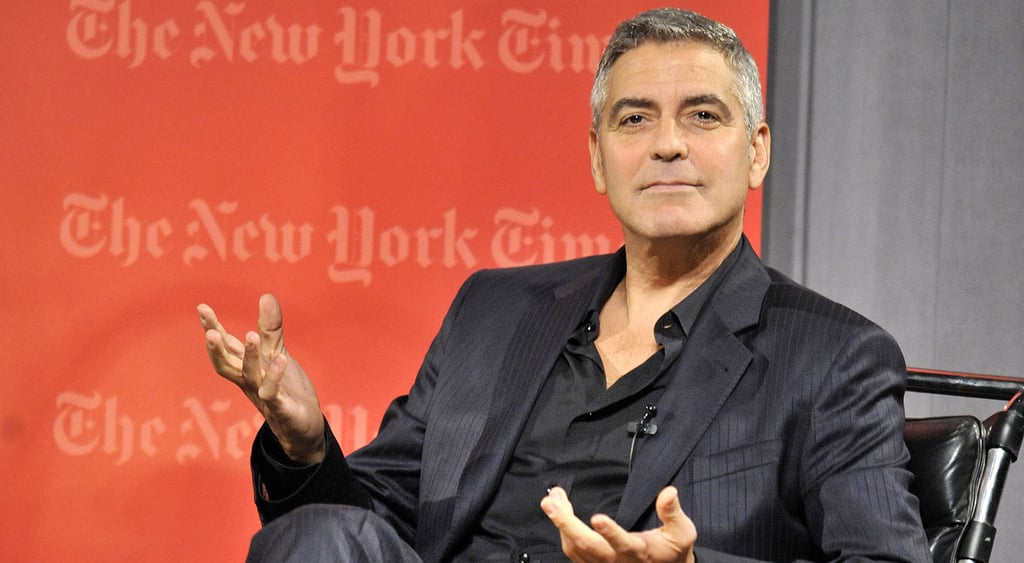 George Clooney rejected a British newspaper's apology after they wrote a story about his relationship with his future mother-in-law, Baria. Earlier this week, Daily Mail claimed that Amal Alamuddin's mother had been "telling half of Beirut" that she didn't think George was good enough for her lawyer daughter because he was not Druze, an Islamic sect that is big in Syria and Amal's native Lebanon. The report claimed that Baria and her family joked about the Druze custom of excommunicating and even physically harming men and women who marry outside of the Druze sect. However, George claims that the report is completely fabricated and also damaging to the health and safety of his fiancée's family. George wrote:

"The Daily Mail has printed a completely fabricated story about my fiancée's mother opposing our marriage for religious reasons. It says Amal's mother has been telling 'half of Beirut' that she's against the wedding. It says they joke about traditions in the Druze religion that end up with the death of the bride. Let me repeat that: the death of the bride. First of all, none of the story is factually true. Amal's mother is not Druze. She has not been to Beirut since Amal and I have been dating, and she is in no way against the marriage — but none of that is the issue [. . .] This lie involves larger issues. The irresponsibility, in this day and age, to exploit religious differences where none exist, is at the very least negligent and more appropriately dangerous. We have family members all over the world, and the idea that someone would inflame any part of that world for the sole reason of selling papers should be criminal."

George then went on to chastise the paper for placing his "family and friends in harm's way" and said that it had crossed "far beyond just a laughable tabloid and into the arena of inciting violence."

On Thursday, Daily Mail issued an apology to George and pulled the story from its website but claimed that the story was "not fabricated." That did not sit well with George. The actor shot back on Friday in another op-ed for USA Today, dismissing the paper's apology and saying that "the coverup is always worse" than the crime:

"In this case, the Daily Mail has printed an apology for insinuating religious tensions where there are none. In the apology, managing editor Charles Garside claims that the article was 'not a fabrication,' but 'based the story on conversations with senior members of the Lebanese community.'

The problem is that none of that is true. The original story never cites that source, but instead goes out of its way to insist on four different occasions that 'a family friend' spoke directly to the Mail. A 'family friend' was the source. So either they were lying originally or they're lying now.

Furthermore, they knew ahead of time that they were lying. In an article dated April 28, 2014, reporter Richard Spillett writes in the Mail that 'Ramzi, (Amal's father), married outside the Druze faith,' and a family friend said that 'Baria, (Amal's mom), is not Druze.' The Mail knew the story in question was false and printed it anyway."

This is the second time this year that George has publicly responded to reports about his private life. Back in April, a report came out that claimed that George got in a fight with conservative hotel magnate Steve Wynn while discussing politics over dinner. The actor confirmed that the story of the argument was true, but clarified that he got upset because Steve was calling President Barack Obama disrespectful names, even after George said that he considered him a friend and that he should back off.

George ClooneyAmal Clooney
Around The Web