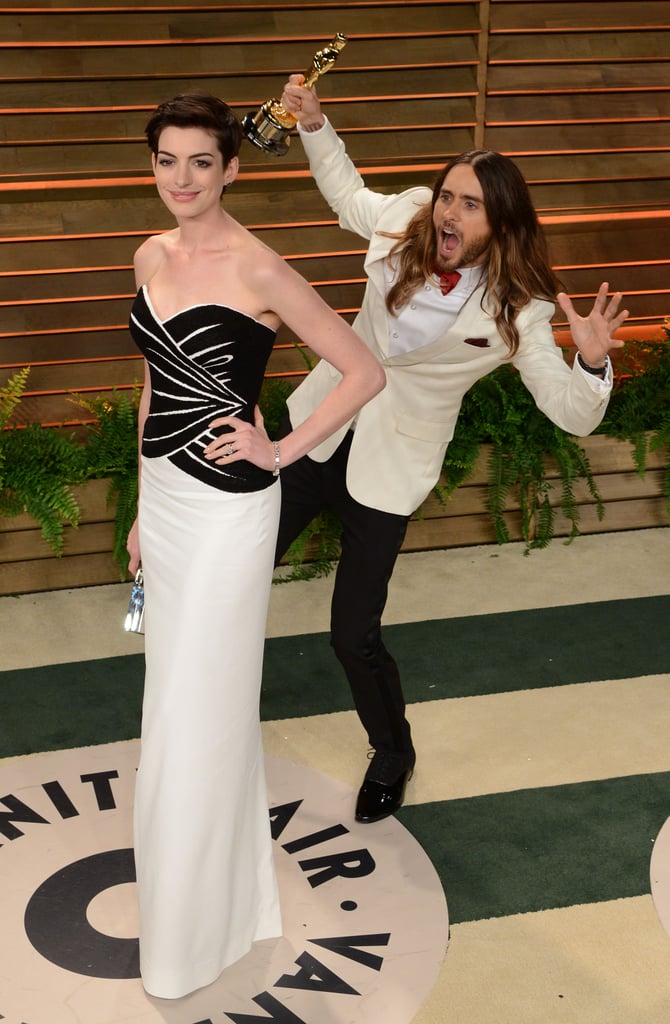 Jared Leto gave his best attempt at a surprise photobomb on Sunday night when he teased Anne Hathaway on the red carpet at Vanity Fair's annual post-Oscars bash. Jared, who was still holding his best supporting actor Oscar, attempted to creep up on Anne, who had won best supporting actress last year, but she turned around and caught him in the act. Luckily for Jared, she saw the humor in it and giggled with him on the carpet as they both posed for photos together.

Photobombing appears to be the thing to do at this year's Oscars, as many more stars got in on the fun on Sunday night. Glenn Close photobombed Ben Affleck and Jennifer Garner at the Vanity Fair fete, and Benedict Cumberbatch punked U2 by jumping on on their group snap on the red carpet at the Academy Awards. And let's not forget Ellen DeGeneres's surprise videobomb of Leonardo DiCaprio and Sandra Bullock, which shocked both actors.

MTV VMAs
From J Balvin to Doja Cat, Here Are the Artists Performing at the 2020 MTV VMAs
by Monica Sisavat 4 days ago

Pose
Dear Hollywood, the Trans Women of Pose Deserve Your Recognition
by Corinne Sullivan 1 week ago